One of the things I've learned about Korea is that Korea loves markets. While I think I've done a good job of exploring as many markets as I can in the past two years, I'm kicking myself for just now making it over to the Seoul Folk Flea Market. It's kind of amazing, offering a glimpse into the past with a slew of antiques and vintage items, and you should go check it out as soon as you can. 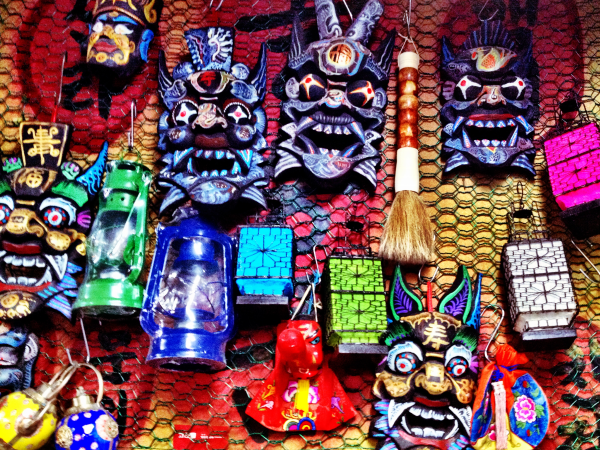 So if you take a Goodwill thrift store and mix it with equal parts antique shop and estate sale, then throw in a pinch of distinctly Asian flair, you've got the Seoul Folk Flea Market. Though I said above that I'm upset it's taken me two years to find this market, it's probably also for the best. If I'd known about all the vintage and antique things in that that building holds when I was first decorating my apartment in 2011, it would have been dangerous. That being said, this is definitely a new go-to spot for gifts and souvenirs. And hey, it's nearly Christmas shopping time, right? 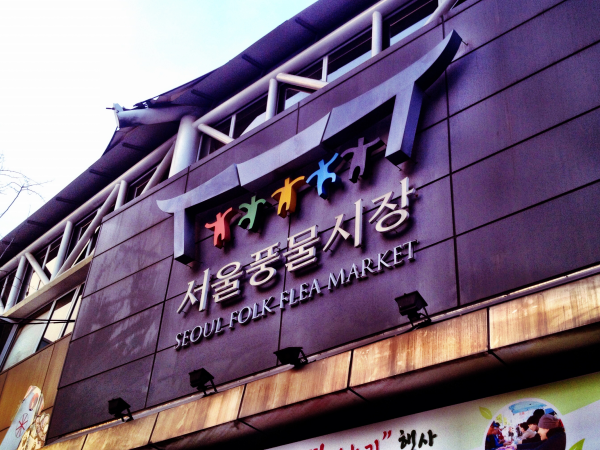 We actually found the market by accident as we were wandering around looking for a different market entirely. (This particular area of Seoul is lousy with markets and activities, making it a very, very cool area to explore.) Luckily, the Seoul Folk Flea Market exceeded any expectations we had, so it was a mistake we were quite happy to have made.

As you approach the market, you'll spot sidewalks covered in a wide assortment of things. This is how you'll know you're in the right spot.

The flea market was only recently put into an actual building in 2008, with its origins being in the street vendors that used to cluster around that area of the Cheonggyecheon Stream. Now it boasts hundreds of vendors and offers a staggering range of items.

Just one of the many aisles, literally overflowing.

Lucky for us (and you), a respectable amount of effort has been put into making this market organized and tourist-friendly. As we walked around, we noticed that the different areas of the market are color-coded, from the signs hanging above the aisles to the tarps that pulled down over the booths. As you can see in the picture below, here's a basic breakdown of the zones: 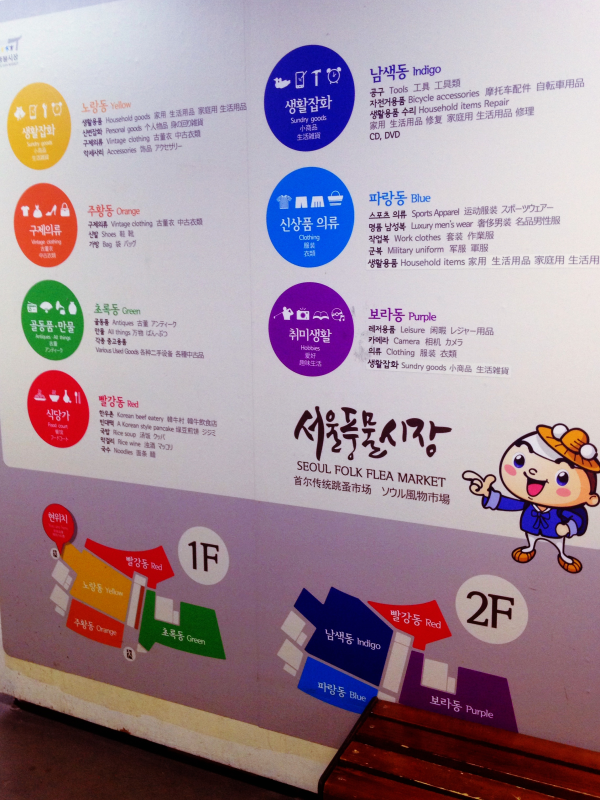 Keep an eye out for maps -- they're posted everywhere.

Also, remember to look down -- floor stickers will help you keep track of where you've wandered.

One thing that I found really striking about this market is the sheer volume of things they have crammed into this building. We found ourselves just staring at the shelves of vases and statues, trying to take in all of the items that were practically (or literally) sitting on top of each other. While this is one of the smaller markets I've been to in Korea with only two floors, you could easily spend hours in there just trying to make sure you saw everything. 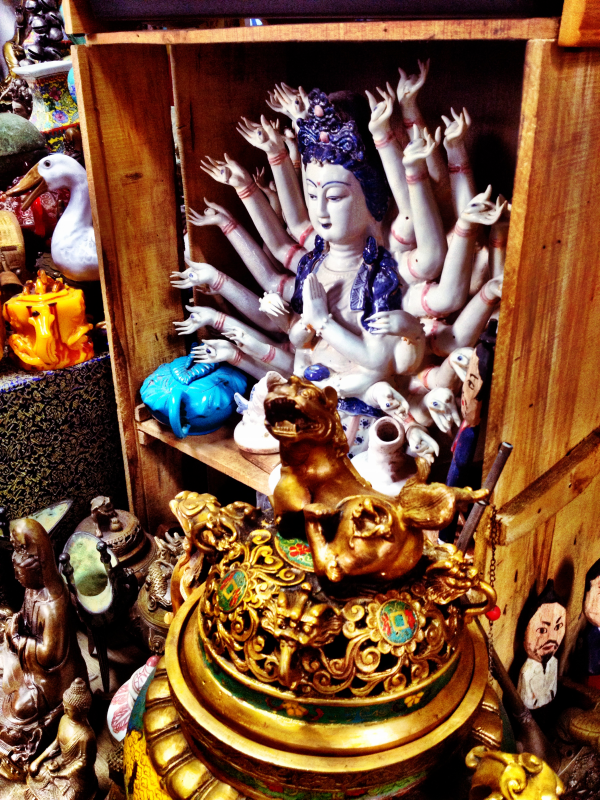 There is just so much happening in this picture. 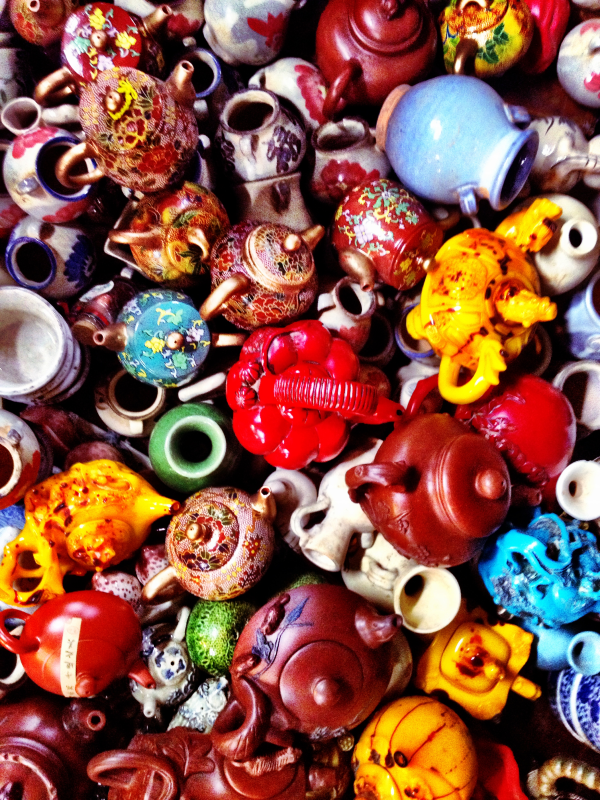 Need a teapot? You can pick up any of these for W10,000 each! Much of what we looked at in the market was reasonably priced, making it an even better spot for shopping.

As we tried to sort through each booth, we had quite a few moments of wondering if some of these items are actually historically valuable -- it seems like it would be easy for something expensive to be hiding in plain sight, marked as junk. Not only did some of the art pieces look like they should be much pricier than they were tagged, some of that stuff looked really, really old. 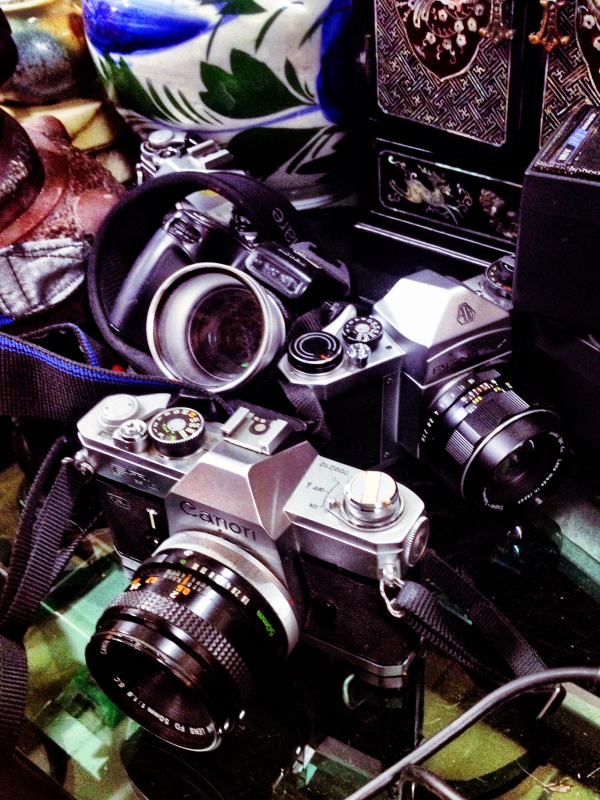 One of the many piles of vintage cameras.

Aside from the obviously ancient antiques, looking through most of the booths was like a bizarre time warp through the past 50 years. I say bizarre because of the number of very American (and generally Western) items that were being sold, which I can only assume are leftovers from the Korean War and Korea's subsequent modernization. The entire building is just steeped in nostalgia, making any attempt to shop with purpose nearly impossible due to the overwhelming desire to just carefully look at everything. 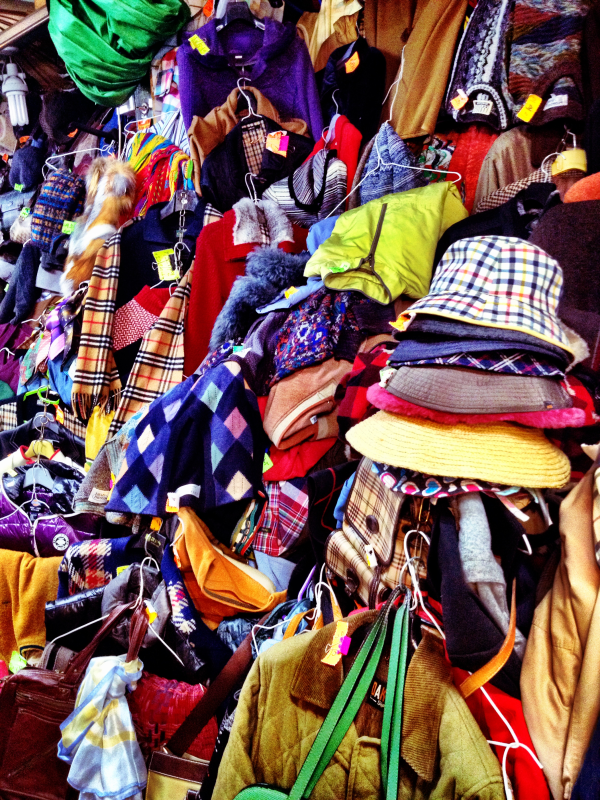 Booth after booth of vintage and used clothes.

Not everything is old: there were quite a few booths selling crafts and more "traditional" items. 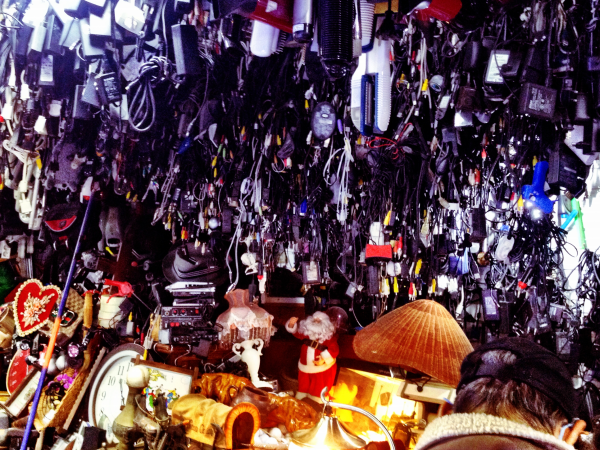 Any and all electronics and power cords that you might ever want. Ever.

Short on time (due to the aforementioned being lost trying to find a different market), we weren't able to devote the hours to the Seoul Folk Flea Market that it truly deserves. The chance to window-shop my way through this building is enough of a draw to bring me back, but I know that my next trip will probably place a sizeable dent in my wallet.

If you're looking for anything unique, from teapots to tutus, alligator skin boots to Buddha statues, this is your place.

Walk straight out of the exit and around the corner on the left. You'll make a left at the Shinhan Bank. From there, look for signs and little lanterns hanging along the streetlights. The market will be on your left! (If you cross Cheonggyecheon Stream, you've gone too far.)

Have you been to the Seoul Folk Flea Market? Leave a comment below!