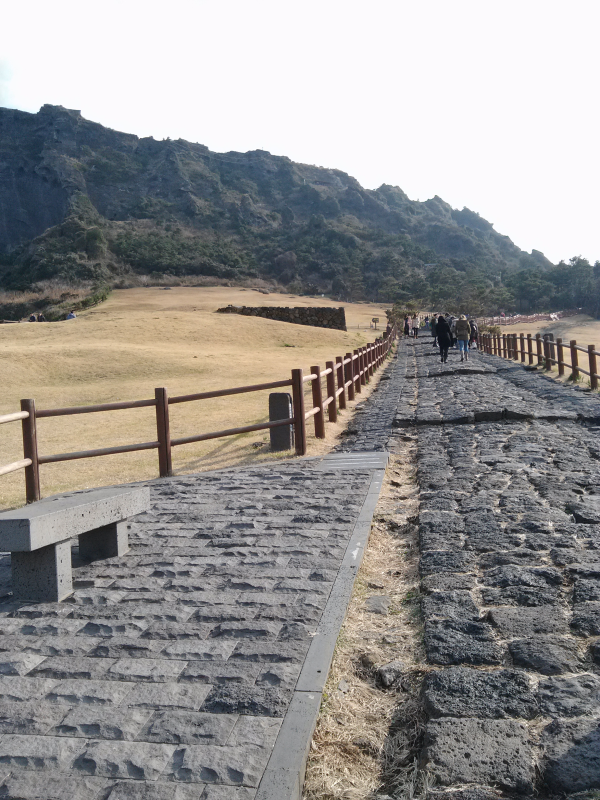 Walk up to Seongsan viewpoint

The first UNESCO site we decided to see was Seongsan Ilchulbong, a filled in volcano crater. It is referred to as "Sunrise Peak," but we were not up early enough to catch the view at sunrise from the top. It was a popular spot, and at the base there was a bit of a festival going on, with live music!

View from the middle

The stone path was marked well, and was easy to walk on. I even saw some women in heels, which must have been a bit tricky, but they managed. It was an uphill walk, with some stairs, but it took us a little under an hour to reach the peak.

The view was not incredibly spectacular, as it looked a bit like a dried-out golf course. However, remembering that it was actually a volcano added to the wonder. 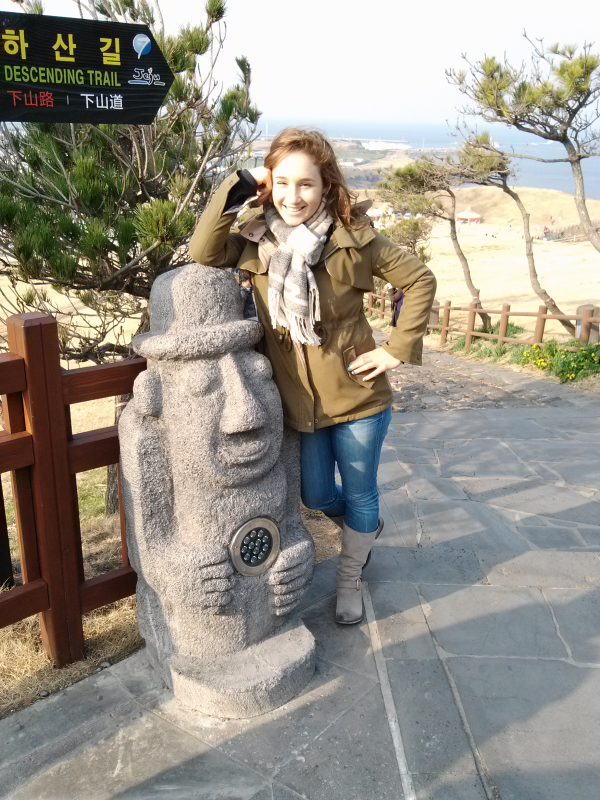 We spotted a particular statue all around Jeju called a "dolhareubang," which means "stone grandfather" in Jeju dialect. The statues offer protectin against demons, and we saw no demons, so I think they work! 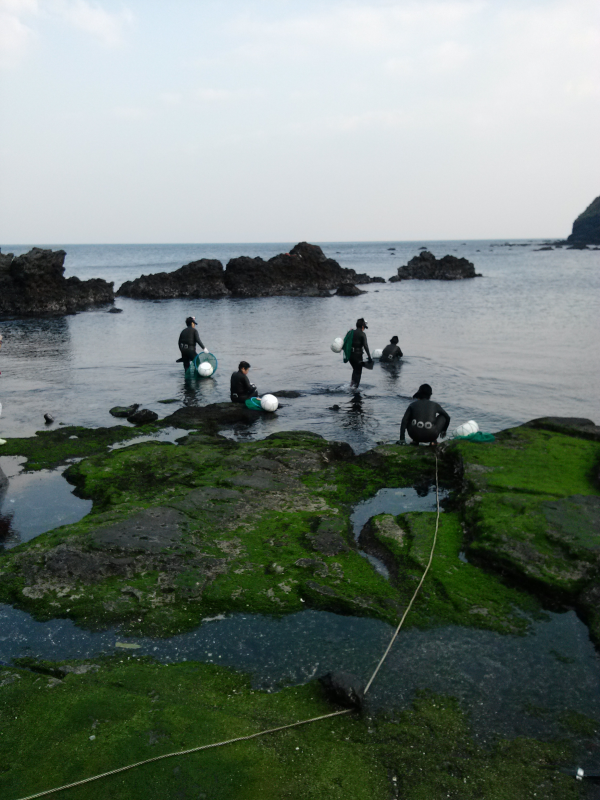 Haenyo, "sea women" prepare to dive off the Jeju coast

One of the most remarkable things we saw were haenyo, older Korean women who dive for as long as 85 minutes (during the summer) without the aid of any scuba tanks or other breathing apparatuses. These women were amazing, and I cannot imagine being their age and making any sort of dive, not to mention even getting a wetsuit on all the way. 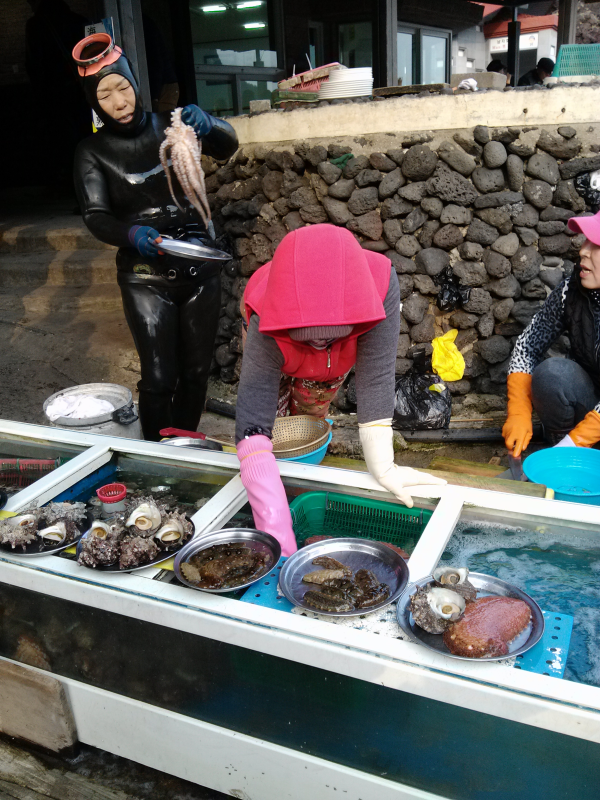 Catches of the day

They all produced a haul of shells, octopus, and other sea creatures. The octopus was the real catch though, and everyone gathered around the tank to bid on it. 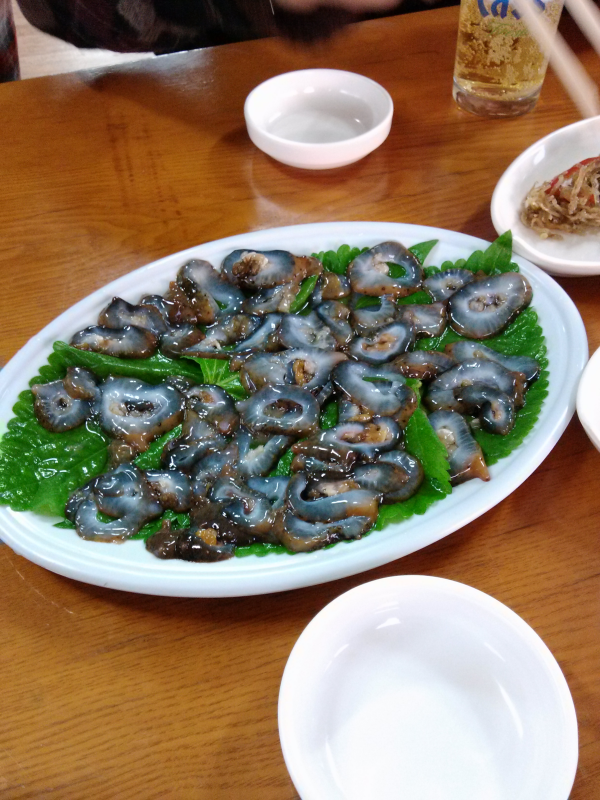 Although we did not win the bid for the octopus, we drove to another seafood restaurant and tried a different sea creature for dinner. We decided to eat raw sea cucumber, and although I thought it was good after dipping it in a sauce, not everyone agreed with the taste. It looked really pretty though! 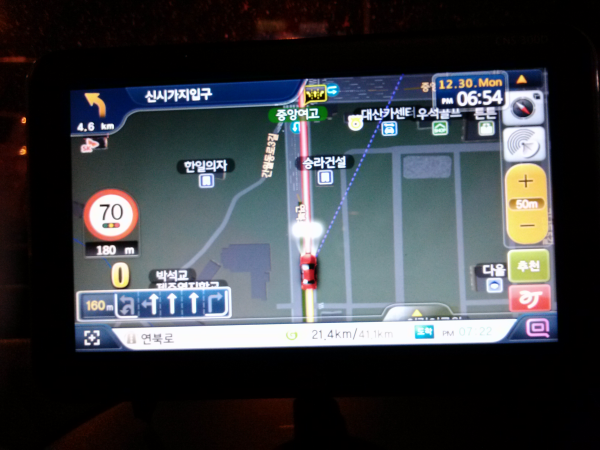 Jeju is pretty big, and we often found ourselves driving from on side of the island all the way to the other side. For this reason, I recommend renting a car with a GPS. There are plenty of car rental agencies you can find at the Jeju Airport, and most GPS's come with an English voice for the directions. However, you'll have to input addresses in Korean, which is a little tricky if you're not sure where you are going. Other than that, getting around was a cinch! See you in Jeju!