Remember the time when internet cafes were a thing? And we had to actually go use them because you didn't have a computer at home or the local library was closed? Well, Korea has taken the idea of an internet cafe and taken it up a few notches in the form of a PC bang, or room. After hearing about PC rooms from my students for years, my boyfriend and I finally ventured into one in our neighborhood, only to be very impressed... 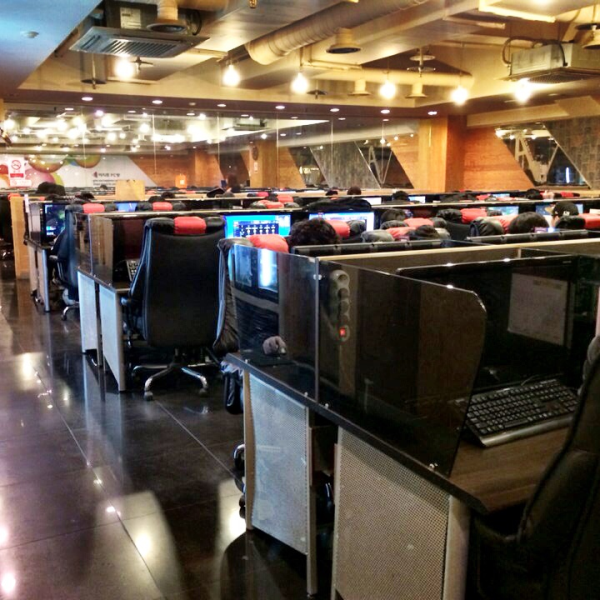 You may be familiar with the concept of "rooms" here in Korea, such as norebang or DVD bang. But even based off of those, I wasn't sure what to expect from a PC room. My students made it sound like a mecca of gaming, joking with me about how they spent hours and hours playing LoL instead of doing homework. Unable to get images of dingy internet cafes out of my head, I was very curious to see why these are so popular in Korea.

One of the many rows.

PC rooms are nearly as common as coffee shops, so all we had to do was scan the signs on the sides of buildings to find one. When we walked in, we were met with bright lights and row after row of computer stations, reminding me of a cross between office cubicles and casino games.

So, here's how it worked at the PC room in our neighborhood. When we went in, we had to grab a card that granted a guest password to log into the computers for the day. Regular customers, on the other hand, can purchase a membership that expedites the log in. Everything is in Korean, including the menu to access different games, so if your Korean skills can't navigate the menus, an employee should be able to assist you. 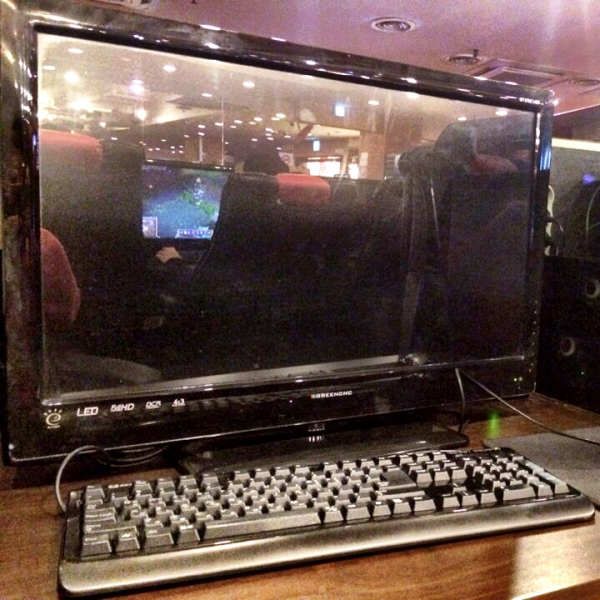 Our computer for the night. 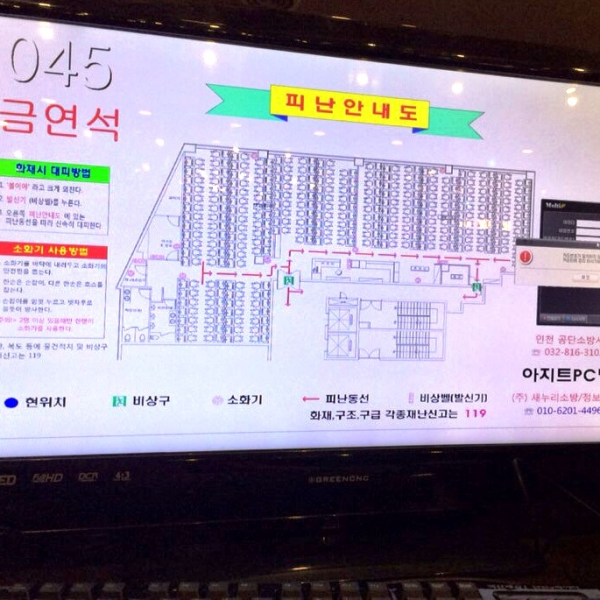 The desktop background, showing a map of the entire place. So many computers!

Even though gaming culture in Korea is quite serious, obviously not everyone in the PC room was playing games. We saw some men hanging out around one computer watching horse racing as well as couples who were just surfing the internet. We noticed there is a wide range in age as well, which immediately dispels images of row after row of hardcore gamers. 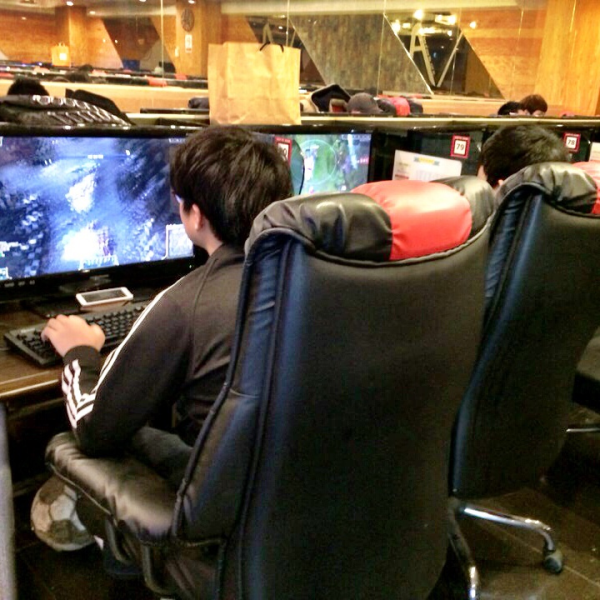 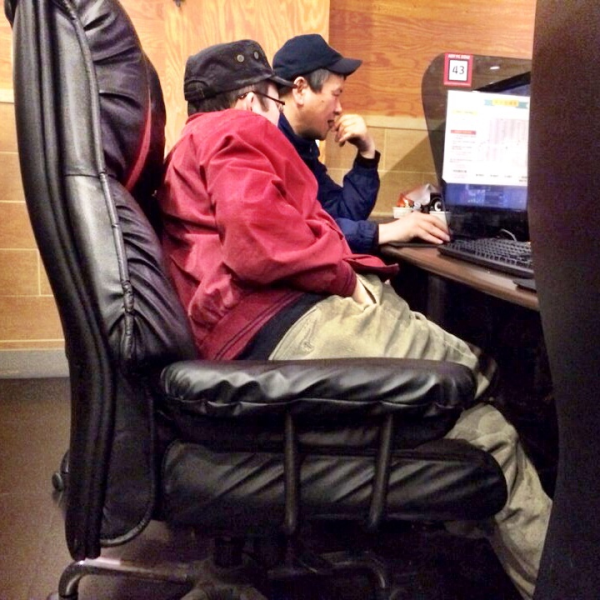 And the horse race watchers.

I was happy to see that there was a snack bar, offering lots and lots of ramen and a variety of drinks. (Including the elusive Dr. Pepper, which is somewhat hard to find in Korea.) Everyone just helped themselves, paying at the snack bar. 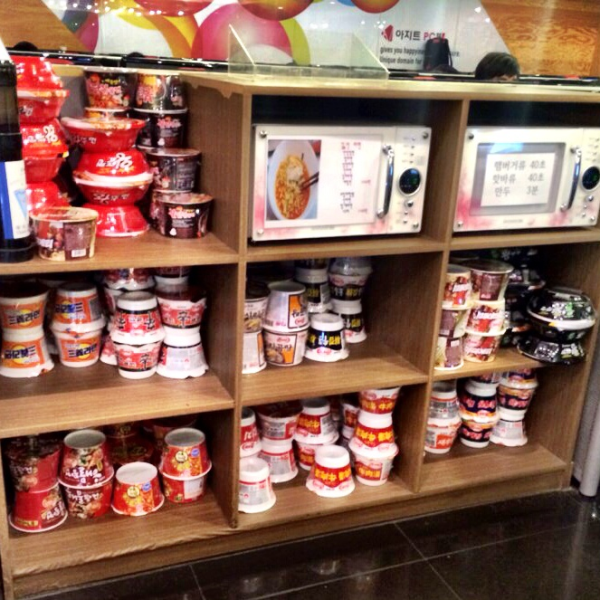 Hungry? Here's a ton of ramen. 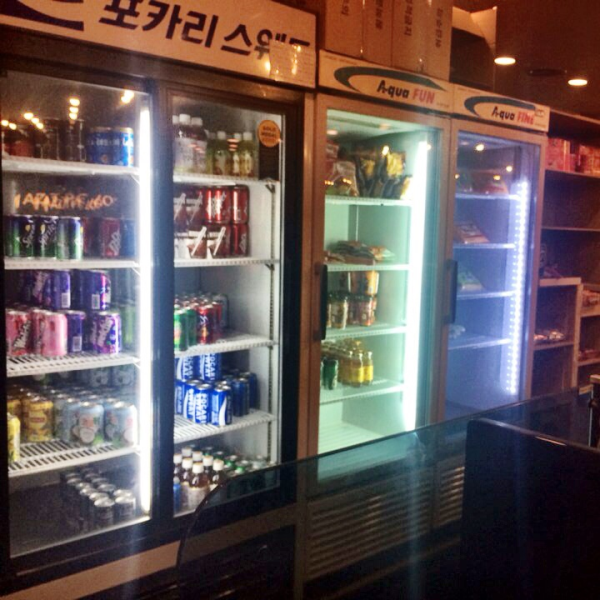 And all the beverages you need.

We were impressed with the cleanliness -- as customers left, employees came over and wiped down everything at that computer station. I'm sure some PC rooms will be sketchier than others, but I've now taken a look into two different ones (there's one above my Chungdahm now!) and both of them are ni-iice.

Because I'm not a gamer, I didn't stay in the PC room as long as my boyfriend did. He reported back, however, that the internet was super fast and the entire experience was awesome. To make it even better, the price was only 1,000 won an hour! With the Dr. Peppers we drank, the grand total was a whopping 4,000 won! Not bad at all!

So, PC rooms in Korea? Pretty cool. In case I ever need a computer while I'm out and about in Korea or suddenly feel like playing a video game with lightning fast internet, I know where to go!

Have you been to any PC rooms in Korea? What was your experience like? Leave a comment below!