Daejeon, known as the unofficial “Silicon Valley” of Asia, is known for its sprawling technological parks and heavy investment in the science and engineering fields. Apparently many of the “nerdy” residents of this city also put on uniforms and play for our local sporting teams, because for the most part the teams’ performances are abysmal to put it nicely. The Hanhwa Eagles, Daejeon’s local baseball team, is perpetually playing at the bottom of the league, and the Daejeon Citizens, our lowly group of lovable losers, recently was demoted to the second league of Korean soccer (or football to all you non-Yanks). But not to fear legions of Daejeon Citizens fans, for hope has risen and a new day is dawning! Like the ashes of the phoenix, we shall rise up and reclaim our rightful place in the K-League! Sorry, I’m getting a little excited here, but I guess I should fill you in on why I carry such enthusiasm for my Citizens.

Sports in Korea are an absolute blast overall, but the Daejeon Citizens games in my humble opinion put all other experiences to shame. From the kickoff of my first game, the atmosphere and the excitement had me hooked and I was soon proudly proclaiming myself a “Daejeonista.” The Citizens are unique, in that they are not sponsored by a huge corporation like the other teams, but are instead owned and operated by the citizens of Daejeon, hence the name. They cannot afford the big name players, so the team embraces a blue-collar attitude that really does make them quite endearing.

Our group of underpaid and underappreciated underdogs works hard, and the fans work even harder. Sitting in the fan section behind the goal is being at the inner sanctum, the “Holy of Holies” of the Daejeon Citizen experience. Sitting is misleading actually, since I have never once actually placed my rear end in a seat. We are constantly jumping up and down, screaming the fight songs at the top of our lungs. There are drummers keeping the beat, with our revered fan leaders at the front, leading us in cheering on our team. When a call goes against our team, the furious screams of protest rise up like a tidal wave, as if the referee had personally insulted each of our mothers. I must say, I have learned 95% of my Korean curse words from these outbursts. Historically, the team has been so consistently dreadful that the casual fans have largely been chased away, but the remaining group of hardcore Daejeonistas is one of the most devoted groups of fans I have ever seen. Considering I know a lot of life-long Red Sox fans, trust me that am certainly a big compliment.

But with our demotion to the second league, the competition level has decreased dramatically, leading to a much welcomed and somewhat confusing string of successes to start the 2014 campaign. After every victory, the fans stream over to the team entrance, where we cheer wildly as our team emerges triumphantly to ride the team bus. Being literally the only foreigner supporters in Daejeon, the team and coaching staff usually recognize us and will take time to shake our hands and take pictures. Ironically, the team’s star Adriano actually refuses Korean requests for autographs until he has greeted us. It is one of the rare times where a foreigner will receive special precedence over a Korean person, which is a small pleasure that I certainly relish. 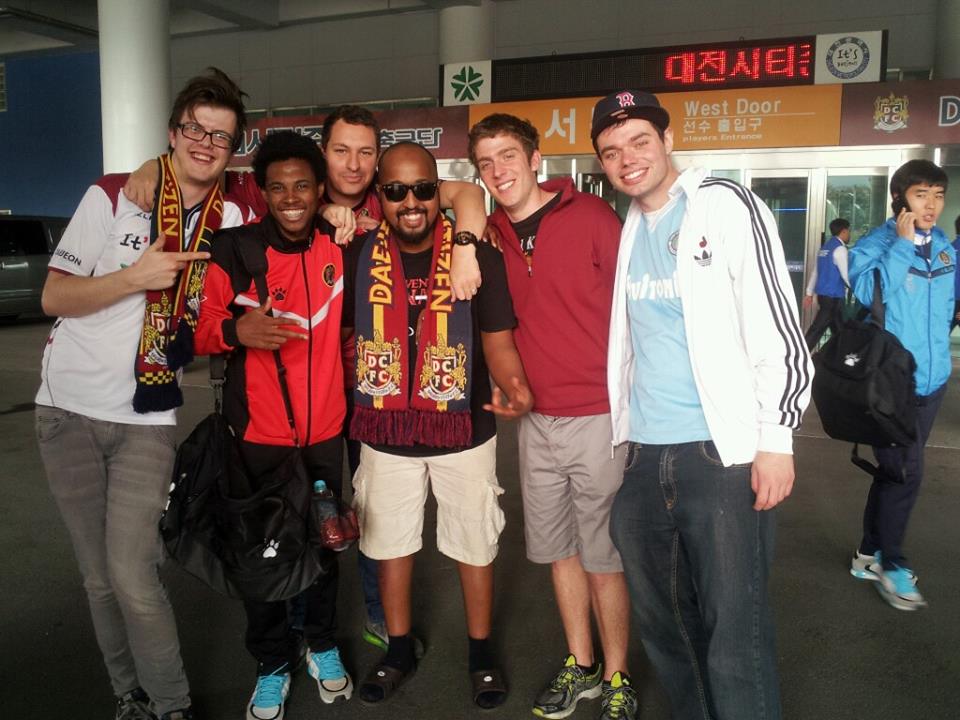 Overall, a Daejeon Citizens game is one of my favorite activities in Korea, and an experience anyone teaching English in Daejeon should check out for themselves.