Conveniently located in Southern Seoul, it can be reached by the pink and purple subway lines (Line 8, Mongchontoseong Station; Line 5 Olympic Park Station respectively). My favorite way to get to the park is using line 8 because line 5 splits into two at Gangdong Station (you can easily get sent the wrong direction if you are not paying attention). Nevertheless, when you come out of Exit 1, you are greeted by the World Peace Gate. This colorful attraction encircles the Olympic flame that represents Seoul’s hosting of the 1988 Summer Olympics. Typically, you can see many tourists gathered there to try and blow out the Olympic flame.

If you decide to go straight, you will see a time capsule that was dedicated during the ’88 games. The participating countries were requested to bring a rock from their homeland to cover the time capsule. Creating a half circle around the time capsule is Flag Plaza, home of all of the flags from the participants of the games. If you decide to take the steps below towards the lake, you will see the ‘Wall of Winners’ of the 1988 Olympics and the country medal count. It is interesting to see how many of countries have changed since the fall of the Berlin Wall in 1989; for example, East and West Germany no longer exist. Check it out here for more Olympic Park history. 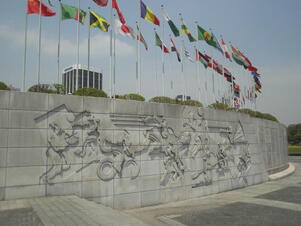 If biking and walking is not your thing, to the right of the lake, you can hop aboard a small train that circles the entire park. If you are getting tired, feel free to take a rest underneath the trees for a small picnic. A Lotteria restaurant, Tous Le Jour bakery, and a number of GS 25 convenient stands can be found around the park. If the sun is getting too hot, why not take in some culture? The Seoul Museum of Art (SOMA) is located on Olympic Park premises. Like any museum, there is a permanent and special collection. Just behind that, is the Seoul Baekje Museum. This is a great place if you want to learn about the foundation of the Baekje Dynasty and how it interacted with China and Japan. The Baekje people were located around the Hangang (Han River) and Olympic Park is on the fortress ground. 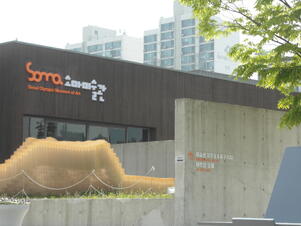 If you still decide to stay outside, you can do your best to locate and take a picture of every artistic sculpture at Olympic Park. Also, there are many mini hills that you can walk up and down of to get your exercise. On top of the hill, behind the lake, is a small outdoor gym. There you can find many ‘ahjussi’s’ (older Korean men) try to maintain their physique. Also, on top of the hills, you can take some great pictures of the stadiums and the Songpa/Jamsil area that is nearby. If you don’t like climbing, there are some basketball courts, a soccer field, jogging and biking courses, and badminton courts located all over the park. One of the best jogging courses is the one located next to the stream. If you jog it going north, you will reach the Han River, but if you jog it south, you will reach its source, a mini-waterfall (located near Geoyeo Station). You may want to take Line 5 back because you have just done some serious jogging.

For times like this, when the weather is just about right, Olympic Park is an awesome place to visit. It is a picture worthy place with lots of culture. One can easily spend hours there without even entering one of the sports stadiums or the musical theater (Woori Hall) located on the premise. Grab some snacks, grab some drinks, and grab some friends and head to Olympic Park for a great time!