The annual CDI Amazing Race was Sunday, 22 June. Twenty teams competed from all over Seoul and its surrounding satellite cities. Each team had to complete as many tasks as possible out of 100 tasks within 4 hours. With teams sprinting like crazy and having a whole lot of fun, Chungdahm Main Branch came in first, completing 67 tasks, with Daechi and Bundang coming in a close second and third. 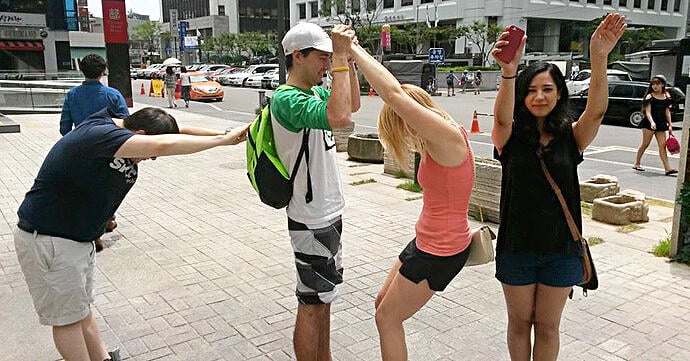 The CDI Amazing Race is similar to a scavenger hunt except you have to complete as many tasks as possible within the allocated time. The tasks are in recommended locations but it is up to the team to decide which spots in Seoul contain the most tasks. The trick is to choose locations on the subway line that are close to one another, limiting the time spent on traveling. Since Seoul is a rather large city, most of the recommended locations are within 20 minutes traveling distance from one another. Another good tip is to be creative with tasks and to interpret the words beyond their literal meaning. 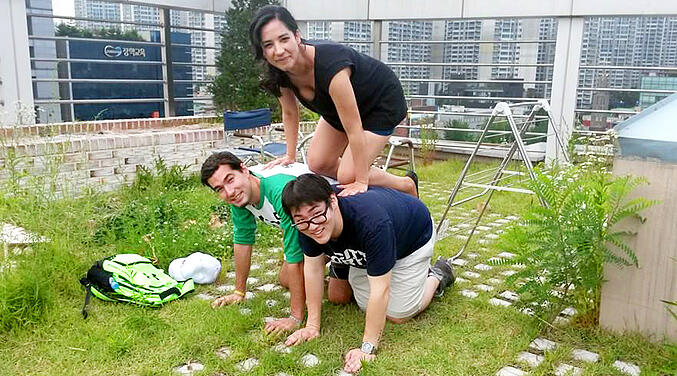 Some tasks are like a scavenger hunt, where you have to find the object, and some tasks require full confidence. You cannot be afraid to approach people and be silly and receive some strange looks. For example, approaching a police car outside of Gyeongbok Palace, knocking on the window and asking a policeman: “Officer, may we sit on the hood of your car and take a photograph?” 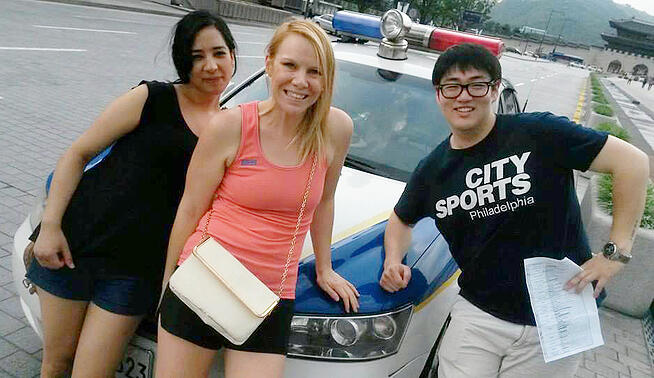 Once you complete a task you have to upload a photograph to your Facebook profile which is then checked by Chungdahm Training Center in Cheongdahm. The photograph will either be accepted or denied, depending on the meaning of the task. You should also remember that every photograph you take must have 2 or more group members in it.

Here are some of my favorite tasks:

Sticker pictures are pretty popular in Korea. You can take sticker pictures at any overly decorated photo studios that kind of look like Japanese anime rooms or Hello Kitty poster signs. Inside you will find an array of ridiculous outfits, different colored wigs, and Korean high school students putting on way too much make-up while getting ready for their shoots. Taking sticker pictures is lot of fun because your group can get silly and have a great time bonding inside the photo booths. I think our team will never forget those brightly colored pink wigs and the sparkling gold and red polka dot jackets! What a fantastic time! 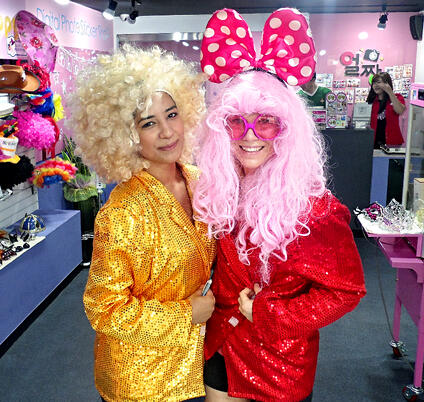 Trying on Ajumma Pants and Hugging the Ederly

If you teach in Korea you will become accustomed to the infamous Ajumma pants. Ajumma pants are worn by elderly Korean grannies; they are baggie and come in all leopard print shapes and sizes. One of the tasks was to find a pair of these pants and try them on. This was a really amusing task, since the elderly women who were selling these pants were so excited to have us try them on! Then we got an extra added bonus of hugging an actual Ajumma (a Korean granny), which was another tick off the task list! Best hug ever! 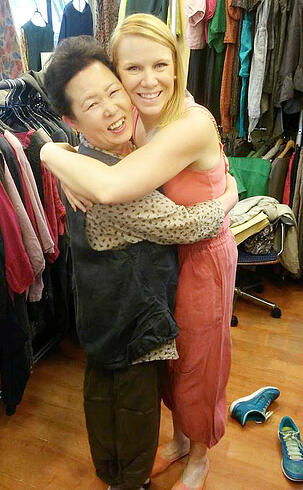 Currently soccer fever is high in Korea. The Koreans are obsessed with soccer and it is the Fifa 2014 World Cup as we speak! Finding soccer fans was not difficult, but finding fans who want to act silly and sing a soccer chant in a video was a completely different story. Lucky for us, our team knew a soccer chant from the previous 2010 Fifa World Cup, and we were able to single out 3 Chinese tourists who were more than happy to sing “Daehanminguk, Fighting!” with us! We even managed to find a cardboard cut out of the Korean team behind us. This was such great fun, and got us into the Fifa spirit. 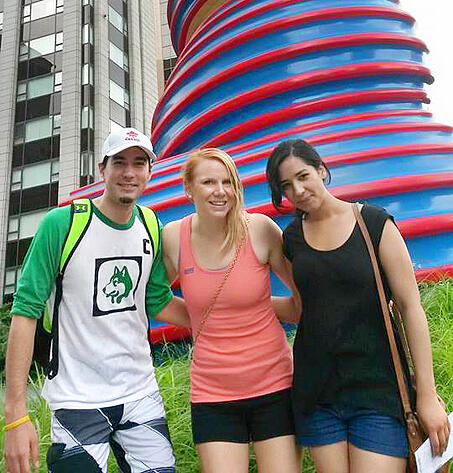 Don’t be fooled by thinking you can find something easily on the day of the Amazing Race. Things you would see everyday in Korea just magically disappear and you cannot find them anywhere! You would think that candy floss, corn dogs, dogs with colored fur and couple t-shirts are easy to come by… these things were nowhere to be seen during our groups franticness. 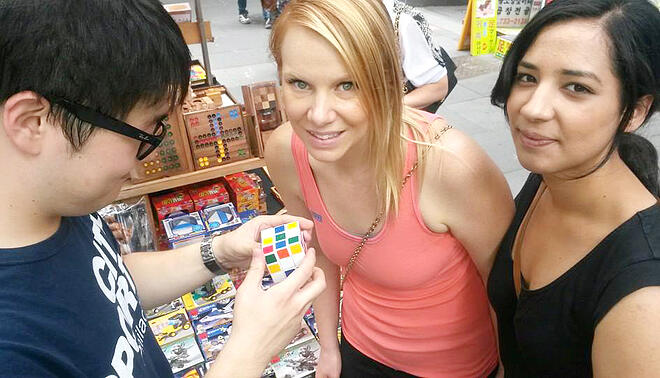 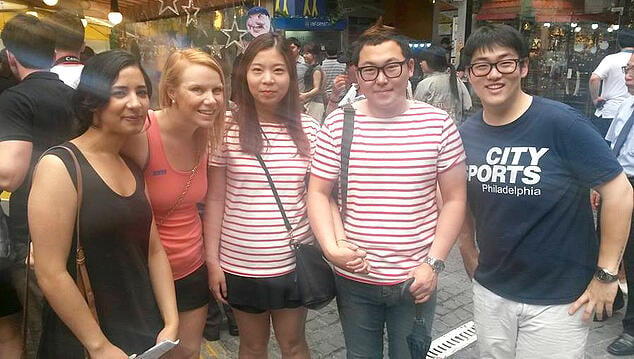 The CDI Amazing Race is highly recommended for all first year teachers and any other faculty members looking to have some crazy fun. You also get to see a lot of Seoul and South Korean culture in one day and additionally can bond with other team mates and share memorable experiences together.  The CDI Amazing Race is another tick on the wanderlust travel list and a day well spent! 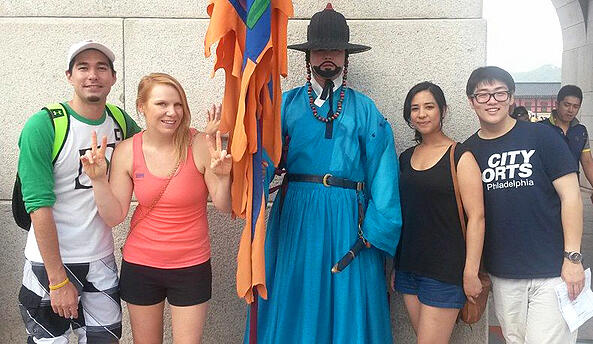 Tags: Amazing race, Teachers, Faculty, Teams, Bonding, seoul, events in Korea, what to do in korea, Activities to do in Korea, teaching at Chungdahm