I’ve mentioned in my previous blogs that I really appreciate the fact that Chungdahm is doing its best to take care of its teachers so that they have a life outside of work. With that being said, over the Chuseok holiday, almost 70 teachers gathered to visit one of the most popular amusement parks in Korea, Lotte World. Lotte World is located in southern Seoul outside of Jamsil Station (Green Subway Line 2, Pink Subway Line 8). 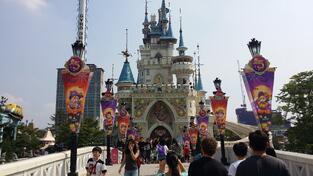 Knowing that a lot of teachers may not have plans over the long weekend, Chungdahm paid the entrance fee for every single teacher who attended the event. Not only that, the first 10 people there got Lotte World towels. Also, there were team challenges to in order for us to win 50,000 Korean won Starbuck gift cards. (I’m happy to say my team qualified!) The team members of Chungdahm headquarters did an amazing job putting this event together doing their best to make sure that 2014 Chuseok would be memorable. 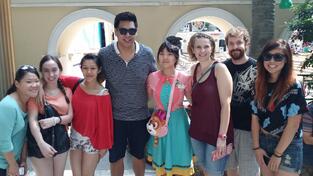 Upon entering Lotte World, the amusement park is divided into two parts, indoors (Adventure Land) and outdoors (Magic Island). Jogging around Seokchon Lake, I always thought Lotte World would be a waste of money. I was completely wrong! I haven’t screamed and laughed like that since I went to 6 Flags Magic Mountain in California. Although some of the rides do look childish, there are plenty of rides that can raise your blood pressure and have you screaming at the top of your lungs. 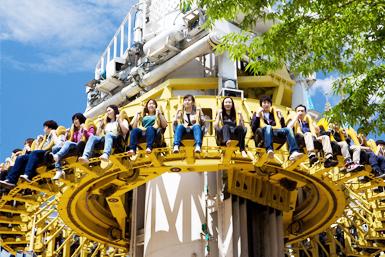 One of my favorite rides was the Gyro Drop. Although it looks like your typical free fall ride, it really isn’t. Once your feet get lifted off the ground, the seats begin to spin allowing all riders to get a 360 degree view of Seokchon Lake. It is a mixture of beauty and fear that made this ride the most memorable for me. As you prepare for the drop, you can hear the ticking of the turns start to slow down and your heart beat with anticipation for the fall. When we dropped, my friends and I screamed only to catch our breath and scream again. It was a pretty long fall from the top of the ride! 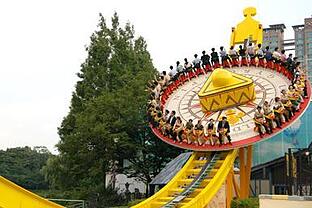 Another one of my favorite rides was the Gyro Spin. It looked simple enough. Imagine a roulette wheel on a slide that goes back and forth. It looked like it would be an easy and enjoyable ride. However, it was not. With only a chair pad pushing your body towards the front of your seat, the ride uses centrifugal force to make sure that riders are safe. It was interesting to see the safety netting over the lake (hopefully it’s there to protect your items from falling over and not you). As the ride slowly begins to swing and turn, it is very relaxing. But as the wheel begins to pick up speed and as you reach the top of slide, it does feel like you are going to fly off. I had never laughed and screamed so much. Once getting off, I was completely dizzy and needed something to drink to cool off my throat.

But you can not go to an amusement park and not try some amazing food. Thankfully, the food prices were much more reasonable than those of the amusement parks that I know back in the United States. One of the foods we had to have was funnel cake. It has been so difficult to find here in Korea, so as soon as we saw it, our group knew it had to be ours. For lunch, since it was Chuseok, we tried some authentic Korean food at the Lotte World Folk Museum. We had some delicious Korean seafood pancakes, Korean sweet potato pancakes, spicy korean noodles, and also a delicious Korean soup made from beef bones.

Overall, I strongly suggest that if you ever come to teach or visit Seoul, you must make a trip to Lotte World to satisfy your urge for a thrill!