I am by no means what you call a ladies’ man. My parents are undoubtedly counting their lucky stars that my older brother has already married and bestowed grandchildren upon them to continue the family name, because they know their second son might not be so generous. It’s hard enough for me to have even a remotely decent conversation with an English-speaking female, so obviously Korean girls have been an even more daunting challenge. To further remind myself of my romantic ineptitude, I attended the wedding of two of my good friends here in Daejeon. While this wedding was a bit more Westernized than a typical Korean wedding, I still figured the experience was unique enough to warrant a blog post.

Before I start, I just want to note that what I am describing is a wedding with no religious affiliation. Obviously, a Christian wedding in South Korea is probably is a bit different, but I have never been to such an event so I cannot really say anything about it. Anyways, this wedding was like every Korean wedding I have attended, in that it takes place at a special hall used just for such ceremonies. If you are expecting the privacy and intimacy of a Western wedding, you are in for a bit of a rude awakening. In this case, our wedding party was allotted about one hour for their entire ceremony, which in itself is not a ridiculous time constraint. But the fact that another wedding is waiting just outside the doors to the hall gave me a bit of an odd feeling. Call me old-fashioned, but I feel that a wedding should not be subject to the prying eyes of complete strangers.

Even so, the ceremony was quite beautiful, with an actual tying of the knot and a duet from the bride and groom followed by a ridiculously smooth dancing exit from the wedding hall (David Tan you are too suave for your own good). They wrote their own vows, and the groom (who is not Korean, even managed to read some of his vows in Korean. I was unfortunately recruited for one of the congratulatory songs at the conclusion of the ceremony, but I will leave the details of that musical disaster to the imagination of my readers. 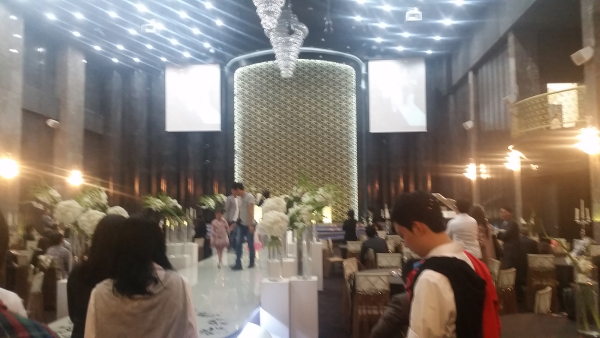 Another different aspect of Korean weddings is the whole idea of gifts for the groom and bride. Sorry if you were hoping to buy something cheap from a registry, because that is not going to fly in this country. It is expected that everyone that attends should give some monetary gift. This is not even remotely subtle, in that there is a special desk with envelopes and pens specifically for this purpose. There is no set rule for a proper amount of money to give, but I gathered that 50,000 won is acceptable. Sorry to totally contradict my fellow blogger, but I was told anything less than that was a bit stingy. This cash gift is essentially your ticket for the buffet following the wedding ceremony. I felt a bit awkward slipping a 50,000 won bill into my envelope, because I could feel the judging eyes of the attendant, weighing my envelope with disapproval.

Overall, the Korean wedding experience is certainly an enjoyable one, but do not expect an all day affair. Last weekend my newlywed friends went the extra mile and booked a restaurant for some post-wedding frivolity, but this is by no means a common practice. Even so, whether it be one hour or six, I was fortunate enough to witness the union of two of my oldest friends here in South Korea. 축하해 데이빗과 김 수 영!