Perhaps one of my favorite aspects of traveling abroad and teaching in South Korea is the diverse range of people that I have been privileged to meet and work with. Currently, my hagwon employs teachers who claim the following cultural designations: Jamaican, Chinese, Korean, Trinidadian, Filipino, African-American, and just boring and plain "White-American" (that would be me). Not to mention, the guy from New Zealand that I met who loves to hike, the Irish boy at the rock-climbing gym, the gorgeous Russian girl who loves to drink vodka, or the sexy Englishman who called me “love” and told me everything I wanted to know about London Bridge, the Prince, and Manchester United’s Wayne Rooney (slight crush).

How about training week, where two of my trainers hailed from New Zealand and Australia, my roommate was South Korean, and I  just happened to stumble across some male opera singers from Poland and Romania who invited me to have breakfast with them and broke into spontaneous song over their cereal and eggs... 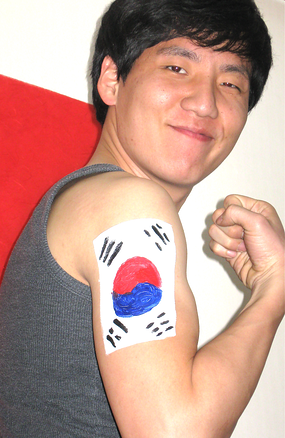 The fun teacher community in South Korea set up a cool body art photoshoot to show off their nation's flags!

But let’s not forget the local Koreans that I have been privileged to meet and whom I will never forget. In fact, some of my best and most memorable experiences have stemmed from befriending the Koreans that I see on a daily, weekly, or bi-weekly basis: Like Mr. Kim at the local Kim-bap shop, who has aspirations of coming to America and always clears a table for us when we walk in for some bi-bim-bap and mondu. Or the lady with the purple eye-shadow at the open air market; though we cannot speak one another’s language, we have built a friendship based on the weekly exchange of my won for her delicious vegetables, not to mention the time that she lovingly and tactfully pulled down my skirt when it was riding up for all of the market to see (Oops). And, my favorite of all, Tailor Joe: My Korean tailor who creates beautiful hand-made silk robes, skirts, dresses, suits, or if you’re feeling frisky, leather bondage lingerie, complete with whips and chains (Didn’t think Koreans knew how to get down? Think again). And a slew of others dotted across my stay in the ROK: The beautiful spa owner who insists that you take off all of your clothes and have a rubdown before you tan, the acupuncturist who plays “Amazing Grace” while he needles your troubles away, or the Korean man on the mountain, who sat with me for two hours as we watched the sun go down and talked about America, movies, hiking, and the fact that I am not yet married. This was very troubling for him and, as such, he offered to let me marry his son. I’m still taking it under consideration.

As an homage to this overwhelming and life-enhancing diversity, I decided to put together a body-painting art project and photo-shoot. I invited my fellow teachers to have their flag of origin painted somewhere on their bodies and to sport them for them cameras. Below is one of my favorite shots, a group photo representing S. Korea, Japan, Jamaica, Trinidad, Nigeria, and Scotland. 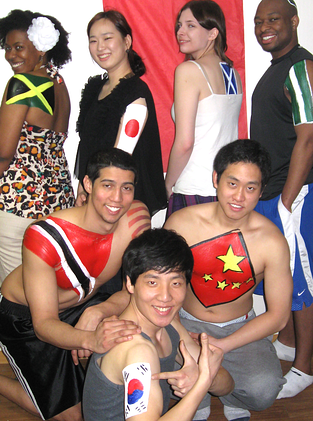 This spirited group represents their various cultural backgrounds, though they're all now living in South Korea!

Though the United States and Canada host a wide variety of people, we often tend to stick with our own crowd, culture, or color. When you’re living in Korea, however, you become the foreigner, along with everyone else who is not Korean by birth. As a result, you get mixed together in a delicious milieu of cultures, backgrounds, dialects, and experiences- learning more about every one’s corner of the world and, perhaps, just a little bit more about yourself.

After receiving her degree in Secondary English Education from Indiana University, Hope Gately wanted to experience Korea's famous educational system, which is currently ranked #2 worldwide. She began teaching at the Pohang-Namgu branch of ChungDahm Learning in Korea last year, after being recruited by Aclipse. Since Hope is an avid hiker, foodie, and fashion enthusiast, she loves living in Korea and enjoys the mountains, cuisine, and "Kill-Heels." Questions about teaching in Korea? Follow Hope on Twitter at www.twitter.com/AclipseHope and email her at Aclipsehope@gmail.com!