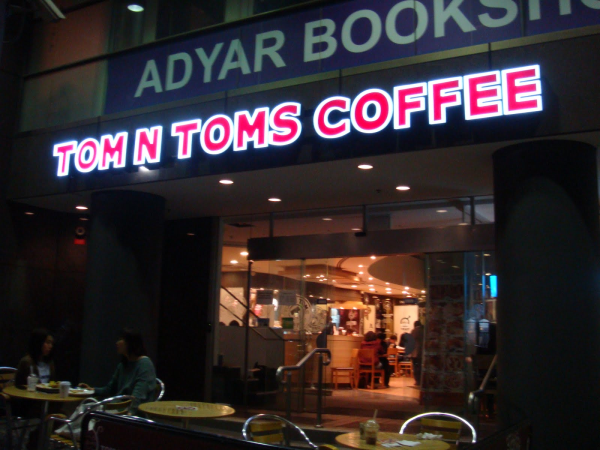 I was amazed at the abundance of cafes when I first came to Korea. In large cities, there seems to be a café (or two or three) on every corner. No matter where I am, I know that I am not far away from getting my latte fix. I love that on my ten-minute walk to work I pass by five cafes (an impressive average of a café every two minutes!). Not only can I get my caffeine fix in the plethora of cafes, but any convenient store offers the widest array of canned coffee drinks that I have ever seen. If there is a type of store more abundant than cafes in Korea, it would have to be the convenient store. (On my walk to work, I pass by six of them!) These stores offer a cheaper, but still delicious, variety of coffee drinks including cappuccinos, lattes, and just plain old coffee.

So why I am amazed by this? Before I came to Korea, I had this preconception that Korea was a tea drinking country only. I did not think they would be as coffee-crazy as the United States. While tea is still very popular, the fast-paced, workaholic Korean lifestyle has led to a boom in the coffee industry. It seems like people need the caffeine to meet the demand of their hectic lives.

With the boom of the coffee industry, several large coffee chains have moved into Korea to meet the demand. This unfortunately has hurt a lot of smaller, ‘mom and pop’ cafes and tea shops. (Although there are some awesome, smaller specialty cafes that are springing up—more about those in a later blog!)  This has obviously happened in the U.S. (thanks Starbucks!), but it seems to be happening on an even grander scale in Korea. To see on how big a scale, check this out. Not only has Starbucks moved into Korea, but there are also several other chains that can be found throughout Korea. Some of the ubiquitous chains are as follows: Tom n Tom’s, DaVinchi Coffee, Caffe Ti-Amo, Angels in Us Coffee, and Caffe Bene. Those are just a few, but I guarantee that if you stood on any street in Seoul, Busan, or Daegu, you would be able to see one of these chains.

Moving on to another point, I am still trying to decide on my favorite chain. Right now, it is a toss up between Tom and Tom’s or Caffe Bene. I like the selection at Tom and Tom’s, but the ambiance at Caffe Bene is hard to beat. I would love to hear what you have to say about your favorite cafes in Korea...feel free to leave a comment!