Since living in Korea, I’ve been asked over and over again what made me decide on becoming a vegetarian.  I too am sometimes bewildered at the exact reason, as it has changed over the years.  When I became a vegetarian in 2010, it was because I’d learned that the animals slaughtered for its meat were somehow harmful as it contained chemicals.  I’d heard this over and over, but found it difficult to change my diet.  It wasn’t until several years later that I was able to make the transition to becoming a pescetarian, vegetarian diet that allows consumption of fish.  Pescetarianism excludes meat, poultry and pork but includes fish and shellfish as well as dairy products.  As part of my indecisiveness on becoming vegetarian, I’ve often switched back and forth between pescetarianism and vegetarianism.  Lately, I’m finding cruelty against animals is the major reason for sticking to my vegetarian diet.

While vegetarianism follows a pretty strict regimen on what can and cannot be eaten, I’ve found that my diet has become more relaxed while living in Korea, especially when eating out.  Although many foods, including kimchi appears to be meatless, I've heard that it actually contains meat byproducts.  The same is true for ramen noodles, an other seemingly Korean vegetable dishes.  I've decided not to let this bother me too much.

I've been lucky to find good food options at the neighborhood supermarket, E-mart.  There are several brands of tofu, lots of vegetable options and of course, fruits in season.  Luckily, I enjoy my own cooking  and so, I often stay in and enjoy a home-cooked meal.  In addition, at E-mart, you will find many American food brands including Skippy peanut butter, El Paso salsa sauce, Ragu spaghetti sauce among many others.  Also, there are a host of websites that ship to Korea, Iherb for example.  The Iherb website offers organic foods, household products and beauty items that are cruelty free.  I'm sure that whatever you may need, you will be sure to find it there.  So far, I've had bought black beans, red beans, lentils and green split peas from the website; the packages are large enough that I don't have to buy often.

As for eating out, there's a vegetarian restaurant walking distance from where I live in E-Dong that offers a buffet style option that's all you can eat for a reasonable 6,000 won.  Options here include a plethora of Korean sides dishes like kimchi , gimbap, and Ddukbokkie.  There are tons of fresh veggies like lettuce, carrots and cucumber.  Also, all of the ingredients are there for bibimbap.  You will also find several soups including miso (bean) soup.  At this restaurant, there are a lot of great food options that make for a balanced diet. 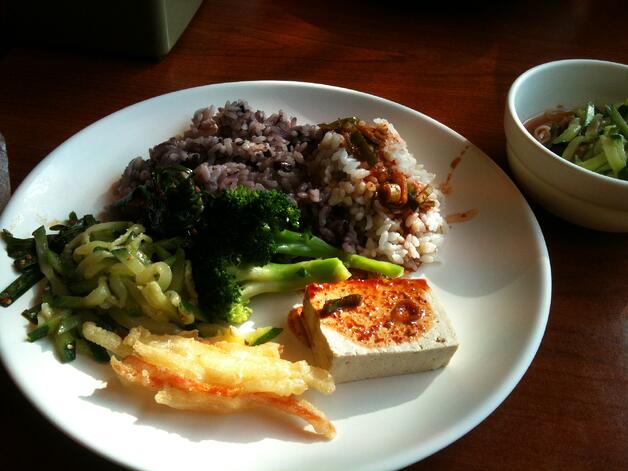 Although you will probably enjoy trying the new Korean foods while teaching in Korea for a year, there will be times that you miss some comfort foods from the USA.  I am excited to tell you that there are several American restaurants here in Korea that have vegetarian food options.  So far, I've been to Bennigans, TGIFridays, OutBack Steakhouse, Butterfingers, PizzaHut and imagine my enthusiasm when I found a Subways Restaurant in Itaewon, Seoul this past weekend.  I thoroughly enjoyed my favorite Subway sandwich, the Veggie Delite and dressed with sweet onion sauce and chipotle southwestern sauce.  Yum! 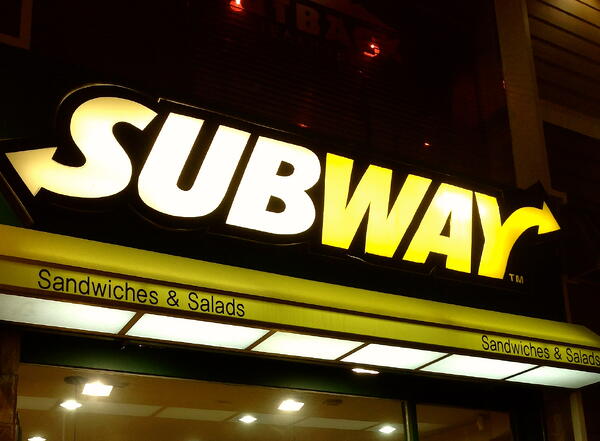 I've seen many people give and put off their vegetarian diet while living and teaching in Korea because of the contamination of foods by meat products.  Personally, I decided that I'd rather deal with some contamination that give up completely.  As an advocate against the cruelty of animals, I hope that you will stick to your vegetarian diet as well as an English teacher in Korea.