During the introduction, Liana's mom busied herself setting the table.  Everything looked incredibly delicious!  I don’t recall ever having someone make this much fuss over me.  I mean, they made sure to include all sorts of Korean foods; there was rice noodles, acorn jelly, tofu with a spicy sauce, pumpkin and bean soup, cabbage kimchi and several foods, I don't know the names of.

During dinner, I was asked several questions about myself.  Can you guess what they wanted to know?  Well, I'll tell you.  I was asked my age; this is a common question from Koreans with whom you're meeting the acquaintance.  Of course they wanted to know where I'm from in the United States.  Liana's mom wanted to know what hobbies I had; of course blogging made the list as well as writing in general.  She seemed impressed when I told her I'd probably write a blog about it.  As the meal progressed, I couldn't help but feel incredibly special to be sharing in this meal.  While dinner is a relativley simple concept, the fuss they made over me and the time they were taking in getting to know me was in fact, gold.  I don't ever recall feeling that special, especially not by people who aside from Liana, were strangers up until that point.

After dinner, the conversation shifted to the piano sitting in the living room.  Liana's younger sister sat at the bench and began playing.  After she was finished, I applauded but Liana was sure to let her know, as she knew as well, that'd she'd made many mistakes.  Liana then sat at the piano and played for me.  That was another special moment for me.  Of course I applauded at the end. 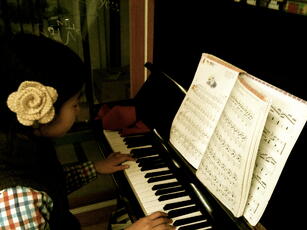 Her mom and dad were sitting at another table with some fresh fruit.  I sat and we conversed more about my coming to Korea and my future plans.  Liana's sister busied herself looking for something.  A shortwhile later, she returned with a book and began reading for me.  This time, we all applauded; her parents were beaming as she read.  Then she showed me a notebook she'd been writing in.  For five years old, I was totally impressed with her.

Liana bought out a game called Blokus, maybe you've heard of it.  I hadn't heard of it, so I listened quietly as they explained it to me.  I wasn't sure what I was doing but I realized that each of them had some sort of strategy. I was just putting pieces down.  As the game progressed, I realized what I was doing and what they were doing to better their chances of winning.  Can you guess who won the first game? 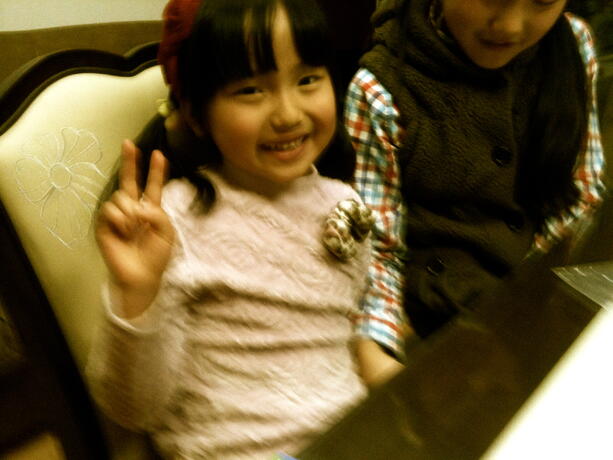 And eveyone cheered!  After learning the strategy, I went on to win the second game.  After more conversation about myself, I realized that they were genuinely interested in knowing more about me and I was invited to come back for dinner again and was told that if I wanted to bring a friend, I could.