Getting Artsy with Anish Kapoor in Seoul, Korea

It's not every day you experience an art exhibit where it all seems to make sense to you. I found one while teaching English in Korea.

Last month on a weekend off from teaching English in Korea, at the Anish Kapoor exhibit at the Leeum Samsung Museum of Art in Seoul, Korea I had a rare 'ah-ha!' art moment. There was no need to whisper to the friend standing next to me, "So what should I be seeing here?" I connected with the art and I found myself imagining Anish to be one pretty awesome person, perhaps someone I might want to get drinks with and discuss the meaning of life. Yeah, he's that cool. And I've never even met him.

Anish was born in India and later moved to England. His art showcases his exposure to ideas of the East and West. He enjoys playing with conflicting elements of nature in different forms. Although his art installations can be found worldwide, when I arrived at the museum I was most familiar with his large permanent installation, Cloud Gate, which is found in the Millennium Park in Chicago. The Leeum Samsung Museum of Art exhibit was his first major museum show in East Asia and boy am I glad he chose Seoul, Korea for this extravaganza.

I have included photographs from my top three favorite pieces. 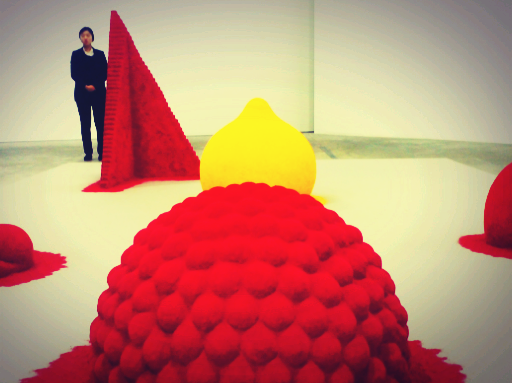 To Reflect an Intimate Part of the Red: I stood cautiously behind the clearly marked line on the floor next to this work. Unlike in my Korean classroom teaching English, I felt as if a sudden cough or loud yell might cause these figures to crumble to the ground. I think the museum worker felt the same way and she eyed patrons as they struggled to get a closer glimpse of the mountains of powder. Piles of colorful pigments from Hindu temples inspired Anish to craft these shapes that seem to spill neatly onto the floor. 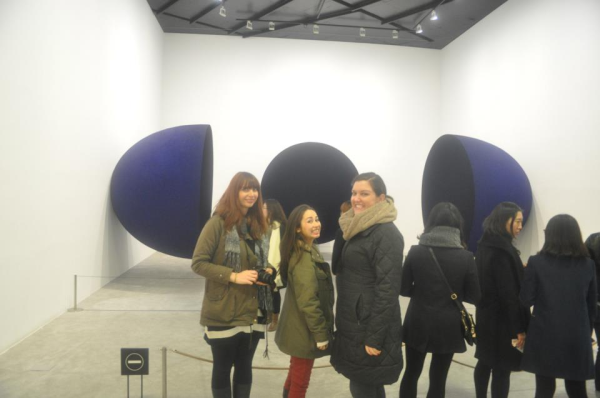 Untitled: At first my English teacher friends and I bypassed this work because there was a long waiting line for viewing. But after talking to a friendly museum worker and noticing the line had decreased, we returned an hour or so later. She told us that this particular piece was an experience and you had to position yourself inside the art to really enjoy it. Because the sculpture is covered with a dark blue powdered pigment, if you stand facing into the sphere it seems as if you're looking into a deep blue abyss. The museum worker also told us to talk loudly (like we do while teaching English) into the art to create a loud and profound echo. I don't think I have ever yelled in an art museum, so this was a nerve wracking first, but it was chilling to hear our voices expanding out into the cavernous blueness of Untitled.

My Red Homeland: This is one of Anish's 'auto-generated' works and a large hammer slowly over time makes one rotation around a mass of red wax. The movement of the hammer signifies a continual state of change - destruction and creation. I walked around this large work a few different times. I remember as a child always being infatuated with the dripping candles my mother reluctantly placed at the dinner table each night. My brother and I would ignore our dinner plates and pick at the hot wax and smooth it between our fingers or let it harden on our skin. My Red Homeland brought me back to my childhood, and I certainly still had that urge to reach out and touch the wax. I kept my hands in my coat pockets and heard my mother's voice in my head, "Leave the candles alone you two, we are trying to have a nice family dinner!"

These are only a few of Anish's many works displayed in Seoul. Did you visit this exhibit? Which works were your favorites?