A New Term Teaching English: How to Encourge a Quiet Class

It’s been quite warm lately. It’s been quite wet. Summer is here. And with a new season comes a new term at Chungdahm branches. There are four terms in a Chungdahm year, and each term brings new opportunities and new challenges. Let me fill you in on what you can expect from a new term, and how you can prepare for one. In this particular post, I’ll focus on how to turn a quiet, perhaps boring class into a lively learning environment. 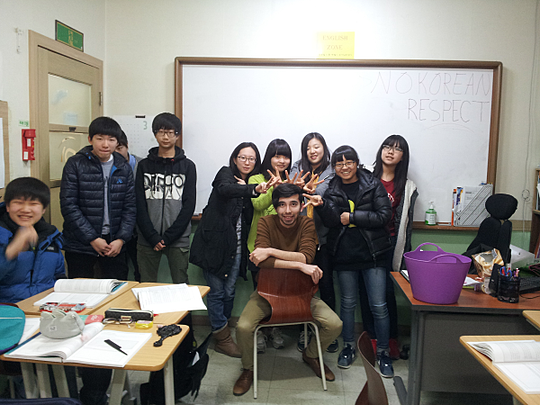 Before we get to a new term, however, let’s talk about the ending of a term. All terms have 13 weeks. The final week of a term is always a bittersweet experience. It’s a time to say farewell to some of your favorite classes. Over 3 months, it’s common to become quite fond of a class. Whether it was filled with your smartest and most respectful students or you had the most fun with them because of their daily surprises and humor, we all have favorite classes. Many teachers attribute the success of a class to the kids in the room. Whereas the kids have a lot to do with it, so does the teacher. Try to remember what made your favorite class so successful and carry those things over into the new classes you’ll be teaching this term.

If you had one class that loved to participate, think critically on the conditions that fostered that environment. Often times, it’s the personalities of the students and the chemistry between them that make or break a class. Teachers, however, have a huge amount of influence on the conditions in the class that encourage great chemistry and allow personalities to flourish.

For example, I had an English Chip level 4 class last term that consisted of eight very creepily quiet children. I pulled out all the stops for these elementary students, and I still got nothing from them. I drew on myself, wore strange props, acted out every scene from the books, threw myself against walls, danced, died, and you name it. At the end of class, I still felt like I had performed in an empty room.

An interesting contrast is the 7 o’clock class of middle schoolers I had immediately after the creepy kids. Middle school kids are notorious for being difficult to motivate. However, this Memory Mega class was filled with some of the most rambunctious kids I’ve ever had. I loved this class. But for the first few weeks, I wondered what the difference was between this Mega class and my creepy EC4 class.

A few things came into play. The first is chemistry. My Mega class consisted of 10 students who had been together in the same class for several months. They had built understandings and friendships with each other. They felt comfortable and safe in each other’s presence. Team building exercises weren’t necessary because this group was a team already. It made my job easy.

Sidenote: If you get one of these classes, it can go well or badly depending on the group’s previous teachers. If the group built their chemistry under a teacher who successfully encouraged positive behavior, then you’ll have a class who is respectful to you and each other. However, if the group bonded under a teacher who lacked strong classroom management, then you may find that the class can quickly mobilize themselves against a new teacher. This may sound dramatic, but what it really means is that when a tight group moves from a teacher with poor management to a teacher with strong expectations, the class can shut itself down. It can be difficult to ingratiate yourself into their group, but over time with the right strategies that I will discuss in a later post, you can do it.

So how do you build chemistry in a quiet EC4 class? First, it’s not something that happens overnight. And it is something that will happen eventually. But if you’d like it to occur sooner than later, try these strategies: Be very overt about treating the class as a team. Use ‘us’ and ‘we’ a lot. Give twice as much effort as you normally would to make them feel special and safe in your class. Allow them to sit where they like. When they become familiar with at least one other person in the class and feel more comfortable in your classroom, force them to work with other students during thinking projects.

Also, tell them it’s OK to have fun. Introduce the idea of fun and teamwork by telling them about your other classes that work together and have fun. Don’t make them feel guilty for being a quiet class. Perhaps as an example of some lesson you’re trying to teach, tell them about a really fun class you previously had. It introduces the idea that fun can be had in your classroom. Most importantly, pretend you’re having a great time in class. There were times when I wanted to shoot myself in the EC4 class, but I could never let it show. Kids feed off you in all respects. If you are having fun, eventually they will too.

The second difference between my Mega and EC4 classes is the kids’ personalities. My EC4 class simply had quieter kids. My Mega class had several students who were naturally more outgoing. There is only one major difference between outgoing children and quiet children: their sense of safety. Inside every child is fun-loving spirit. The way children like to have fun can vary dramatically, but all children have energy and want to express themselves. Your goal is to make the quiet children feel as though they can express themselves in your classroom as much as they do in their homes. You don’t want them to express themselves in the same way as at home but in the same quantity. Make them feel comfortable. Make them feel safe.

Safety is the sense that they will not be rejected or reprimanded for expressing themselves. They can feel free to say what they feel or do what they want. However, if they express themselves in a negative way, then they can be reprimanded. But that is why clear expectations are so important to lay out. If quiet children know what actions to avoid, they are more likely to come out of their shells and express themselves in positive ways.

How do you make a child feel safe in your classroom? First, you must be incredibly encouraging and welcoming. Use open-stance body language. Don’t cross your arms or scowl. Every part of your body should be spread from your face muscles to your feet. Come on strong when they enter the room. Yell “Welcome to EC4!” Spread your arms. Smile. You’ll scare them at first, but that’s ok. After the first or second time, they’ll smile back and feel welcomed. Encourage them in  the old fashion way. Say “you can do it. I know you can.” “Don’t worry, I know you’ll do an excellent job.” “It’s OK. You will do better next time.” Make eye contact. Be sincere. Be personal. Drink coffee or gatorade. You need to have twice as much energy as them.

It’s just as important for the kids to feel as safe around each other as with the teacher. I have a strict no bullying policy. Any negative comment is met with a stern rebuke. I'm more lenient in a class with strong characters, like my Mega class. But a class with quiet kids is a class with fragile kids. Any progress you make on getting them out of their shells can be obliterated by any form of bullying. So lay down the law firmly at the beginning of class. Tell them to be nice, and enforce that rule.

And the last difference between the EC4 creepers and Mega partiers is that the Mega class had several leaders whereas the EC4 class had none. A leader is a student who the others look to when trying to decide how to act. The leader can help set the tone for the class. They aren’t always the most talkative, biggest, or smartest students. They are the kids who the others try to emulate because they either connect well with others or force others to connect with them. It’s either charisma or brawn with these kids, I’ve found.

So what do you do if your class has no natural leaders? You try to groom one. Identify the student who makes the most eye contact or is most willing to talk. Then put them in small positions of power regularly. When you play Popcorn while reading, make this student go first. Cold call this student a little more than the others. Ask the student more challenging questions. Encourage him or her to give his or her opinion. Draw the classes attention to this student regularly. Shower him or her with a little more attention. Don’t overwhelm the student. Try to recognize if the student isn’t fit for the role.

Grooming a leader is the most circumstantial of all the advice I’ve given. Sometimes it’s doable. Sometimes it’s not. Luckily, in my EC4 class, there was one little girl named Lime. She was quiet at first, but after giving her a little power and a lot of attention she came out as a pushy little thing. The other students followed her lead, and soon enough they were all pushy little things. I’d playfully suggest we play a chunk game I know they disliked, and they would all start whining that they want to play their favorite. Whining was better than nothing. Lime started that trend. The others followed.

After four weeks, eight classes, my group of creepily quiet EC4 students became a smiling lot of needy and expressive kids. I almost regretted working hard to get them out of their shells. From then on, I had a full six hours of kids very, very actively learning. I drank a lot of Gatorade on those days. In the end, it was worth it. On the first day of the new term, I walked into their new classroom. It’s always a rewarding feeling to see eight smiling faces turning to look at you when you walk in the door. Good luck. You can do it.