Entrance to BIFF square, a very touristy spot for those visiting for the Busan International Film Festival

The first thing you see in Nampo are vendors under the yellow and red umbrellas. Mostly they sell food, and a lot of them are featured on famous Korean TV shows like Running Man. Some sell socks too though! We bypassed the street snack food for more of a meal though and continued through the umbrellas, then past many small red fortune telling tents, all the way to Meokja Alley. 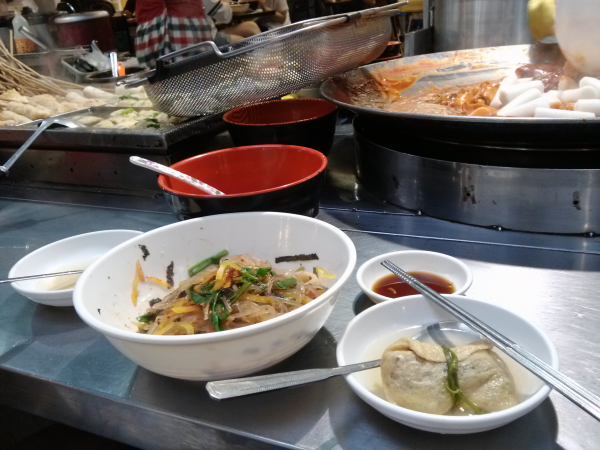 Meokja Alley is literally translated to "Let's Eat Alley," and believe me there was plenty to eat. We decided to sit down and try bibandangmyun, a cold glass noodle wrapped in odeng, a kind of fish cake. This traditional dish is exclusive to Busan. After that appetizer, we decided we needed more seafood, and so traveled down the Nampodong International Market to find the best smelling restaurant. We found one almost immediately, and they specialized in clams. 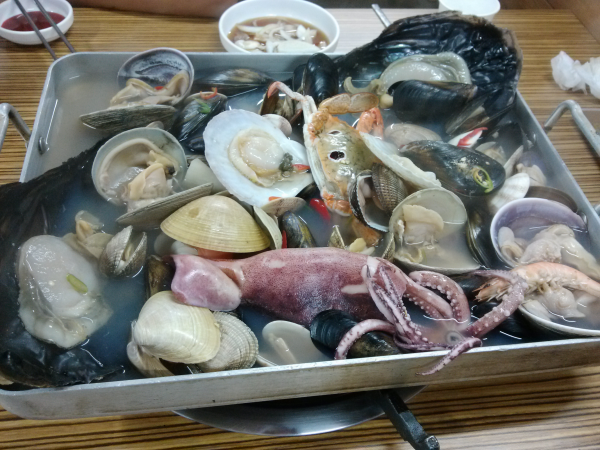 The name of the restaurant I will probably butcher, it sounds like Hea Mul Chaun Zi. There is an adorable cartoon squid logo next to the name, and squid is what they serve. You can get a huge seafood soup platter for two people for 35,000 won, around $34. It is 45,000 for three people and 55,000 for four. For this seafood feast though, it is money well spent.

The large pan of seafood simmers on a stove at your table, and the chef comes around to cut up the squid and the larger mussels. After that, you are on your own! There are a couple sauces to dip the clams in, along with the usual Korean side dishes, and there are a lot of different kinds of clams. 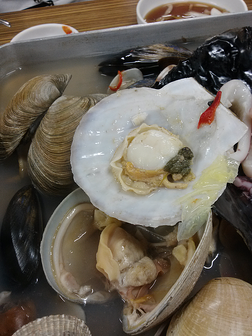 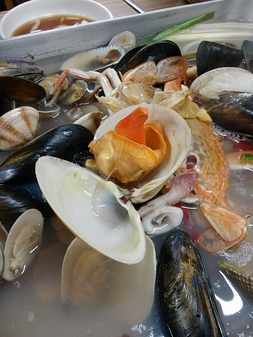 A couple closer shots of the different kinds of clams

There were a ton of clams and mussels, from garibi, which is a clam you can find sometimes barbecued, to the orange bird clam. Underneath all the clams was a king crab! 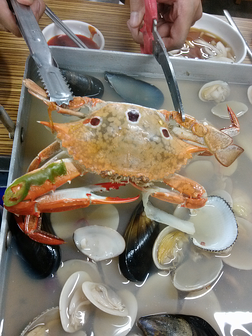 The process of cutting the crab

The chef left behind his scissors and tongs for dissembling all of the rest of the seafood. We got right to it by cutting the crab clean in half and using tongs and chopsticks to get the meat out. It was delicious!

A last glance of the bustling restaurant!

To get to the Nampo area take line 1 of the subway to Nampo-dong and exit either 1 or 2. You are destined to find some amazing food! After consuming said food, consider wandering more around Nampo. There is a lot of shopping, but there is also Yongdusan Park, which is a really nice mountain to check out and relax at. It's also lit up at night!