Taekwondo originated in Korea, so one of the goals I listed for myself before coming to South Korea was taking a straight-from-the-source Taekwondo lesson. I had one of my friends help me find a Taekwondo training center around Jangsan, where I live and work. There were a lot in the area, but the closest was one just a couple blocks away, called Dong-A University. 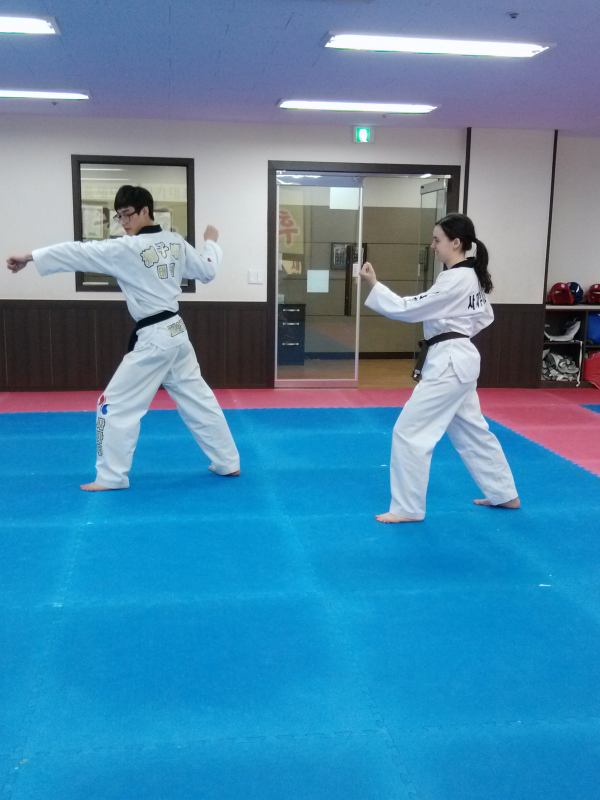 One of the moves in a Poomsae.

Dong-A University offered after-school programs for kids interested in learning Taekwondo, much like my hagwon offered English lessons after school. Since the kid's classes didn't fit with my schedule and might have been a bit embarrassing, we negotiated a private morning class with the Junior Master, who was my age! 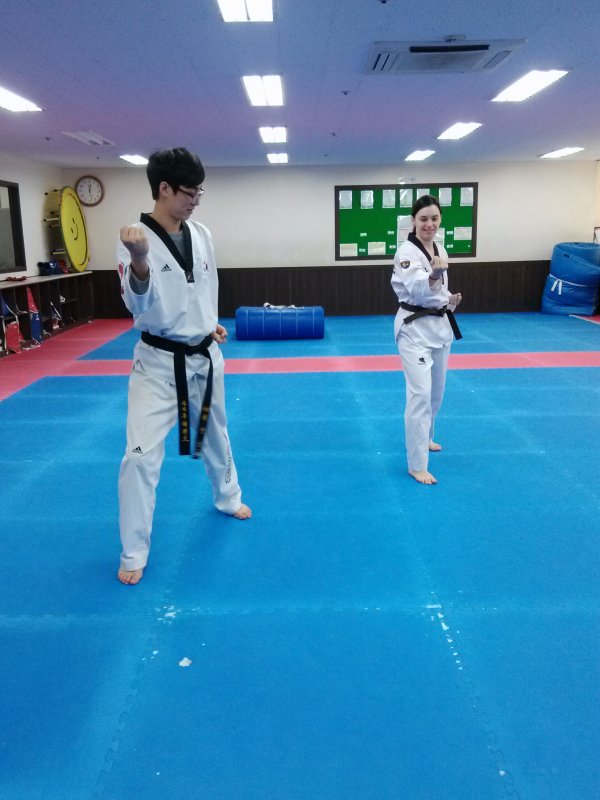 I was able to study Taekwondo from 11:40 am to 12:40 pm Tuesday to Thursday, and I made it all the way to brown belt (although it looks black in the photos) in a couple months. Only one more belt (red) until black belt! 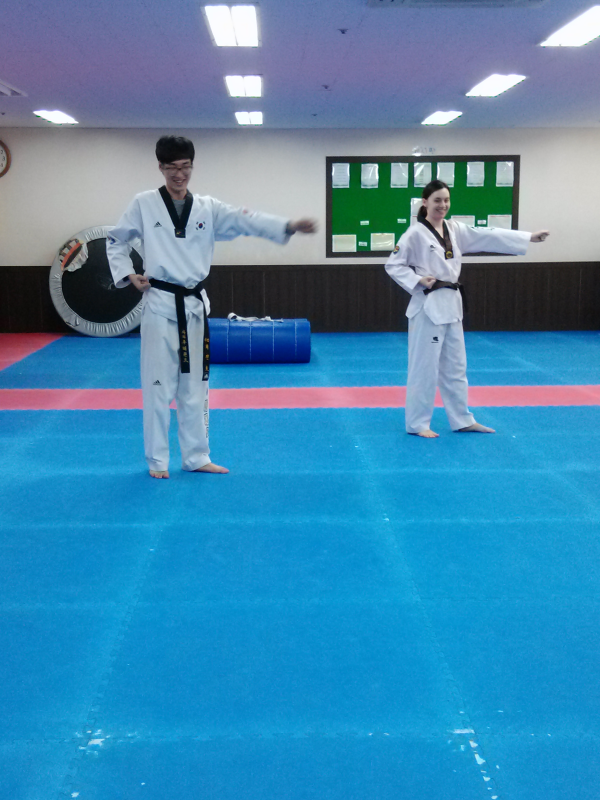 I learned the first five poomsae, which are sequences of kicks and punches. They are kind of like a dance, but with a lot more power and the potential to knock an enemy out. They flow and are pretty fun to learn, but memorizing them is a little tricky as a lot of them start with the same move. The video below shows me trying to learn the first steps of Taegeuk O Jang, which represents the wind. 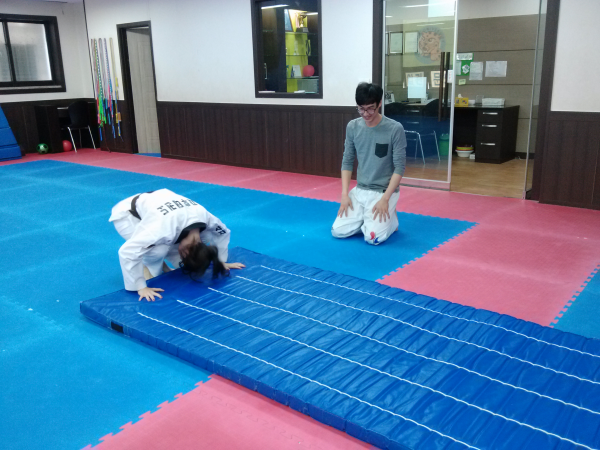 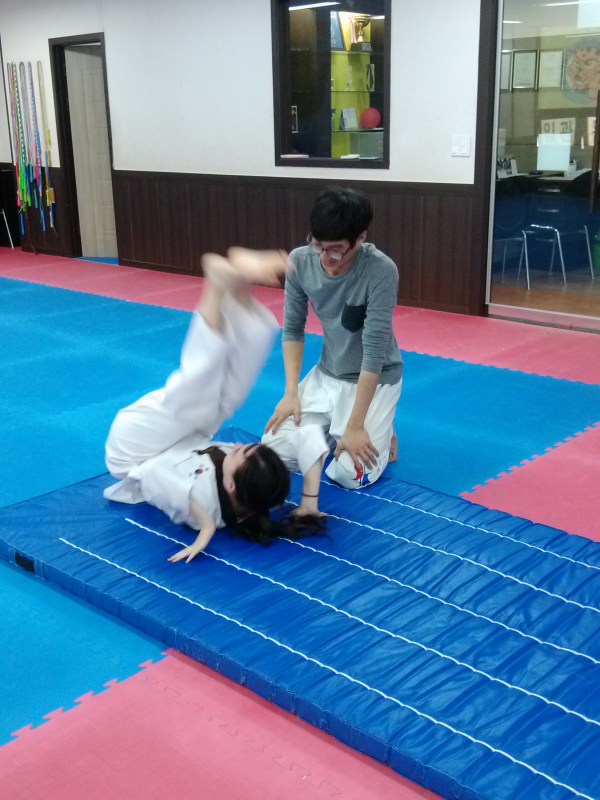 Almost made it through the backwards tumble.

Along with learning the Poomsae, we also practiced tumbling, jumprope, stretches, pushups, crunches, and general fitness activities that woke me up in the morning. I gained a lot of muscle, and discovered some muscles I didn't know existed. 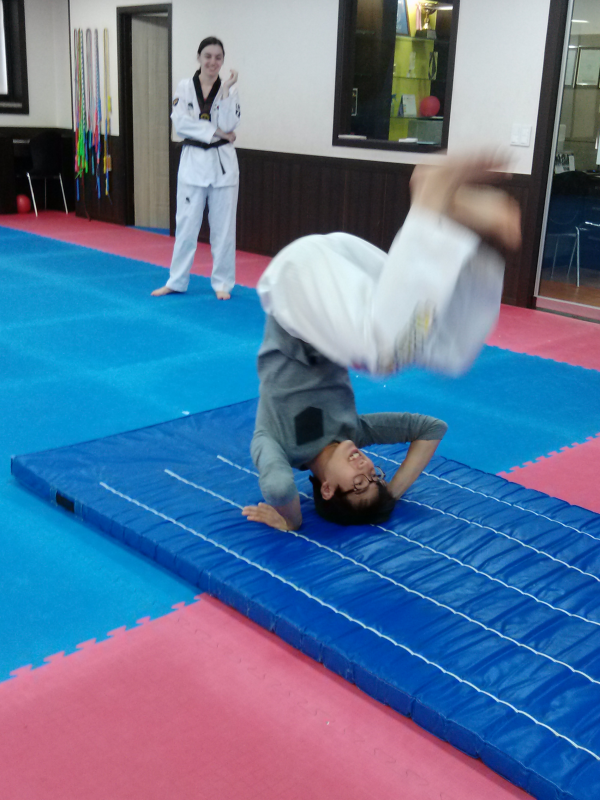 The completion of a backwards tumble.

The Junior Master was clearly a better tumbler than me, and a fantastic mentor. He consistently improved my posture and helped me memorize the poomsae and learn how to jumprope on one foot. I met the Grand Master a bunch of times as well, and both the Junior Master and I gained valuable skills on those days. 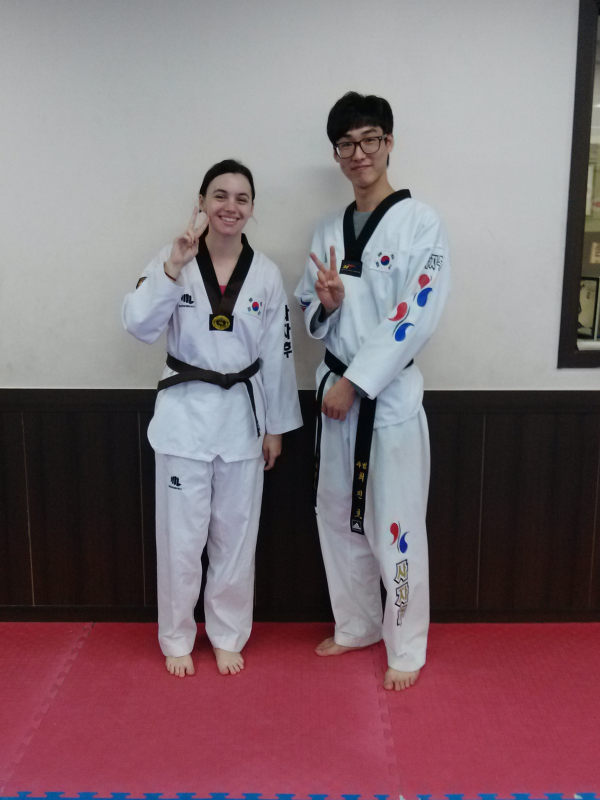 My taekwondo lessons were a wonderful daytime activity before work and I really enjoyed the things I learned and friends I made. Plus, at 50,000 (around $50) a month, it was much cheaper than a gym membership! If you are interested in Taekwondo, look around your area for a location and ask if they offer morning classes for adults. Taekwondo is everywhere in Korea!

Tags: Activities to do in Korea, sports in Korea, taekwondo