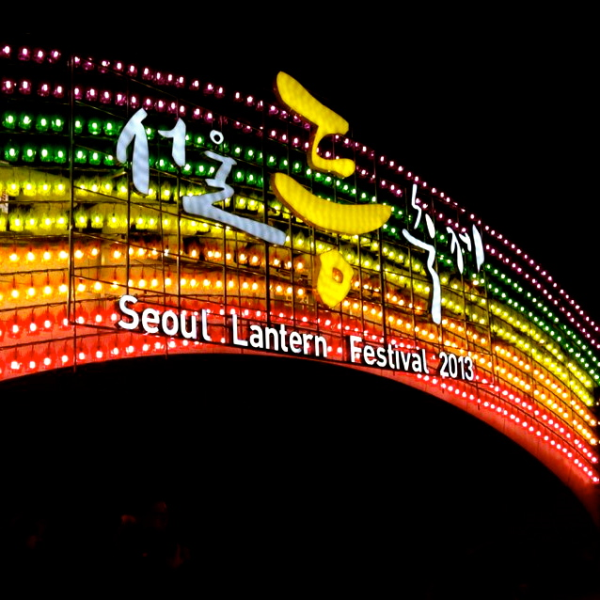 The Seoul Lantern Festival is still new, this being its fifth year, and each year the displays focus on a different theme. This year's theme was "Hanseong Baekje, the Dream of a Thousand Years." The lanterns were designed to recreate different relics and scenes from the ancient kingdom of Baekje, spanning its 700 year history.

We arrived around 9pm on a Sunday night and were pleased so see that it wasn't too busy. Last year I went on a Saturday evening and had to wait in an impossibly long line for about an hour before going in, and then paths along the stream were so congested that it was difficult to get good a good look at the lanterns. Definitely something to be mindful of if you plan to visit this festival in the future.

All of that being said, here's a handful of photos from the festival. I've captioned each with more information about the lanterns and the festival itself, so enjoy!

A view of the lanterns from above the Cheonggyecheon. 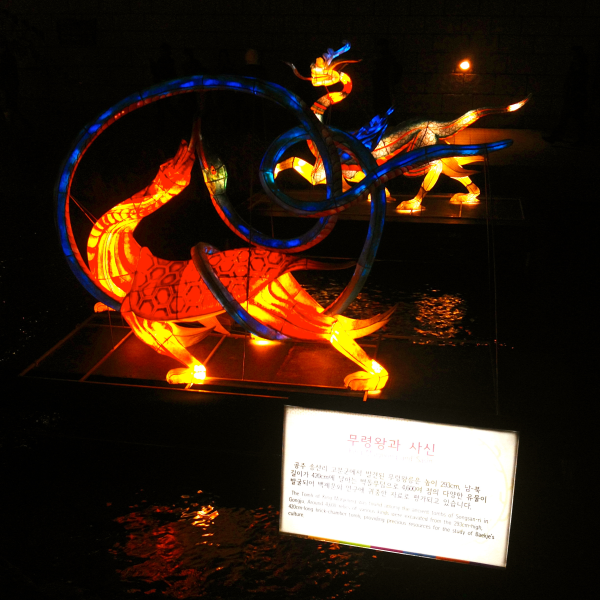 Little signs like the ones pictured were posted near every group of lanterns, explaining what they represented and giving mini-history lessons. This one tells about relics (such as the dragons pictured) that were recovered from King Muryeong's tomb, providing cultural information about Baekje.

The signs gave really valuable information for those of us who may not know all about Korean history. 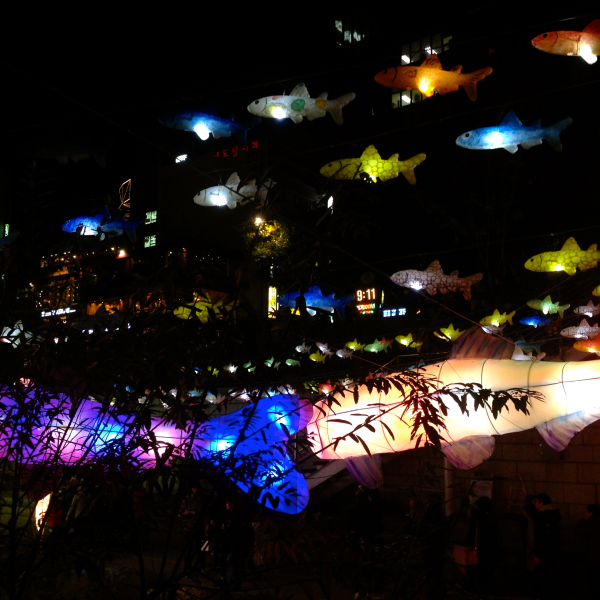 Fish! Inje smelt, specifically. There was a similar display to this last year, and it's still one of my favorites. The placement is just always creative -- walking under the lanterns is always cool. 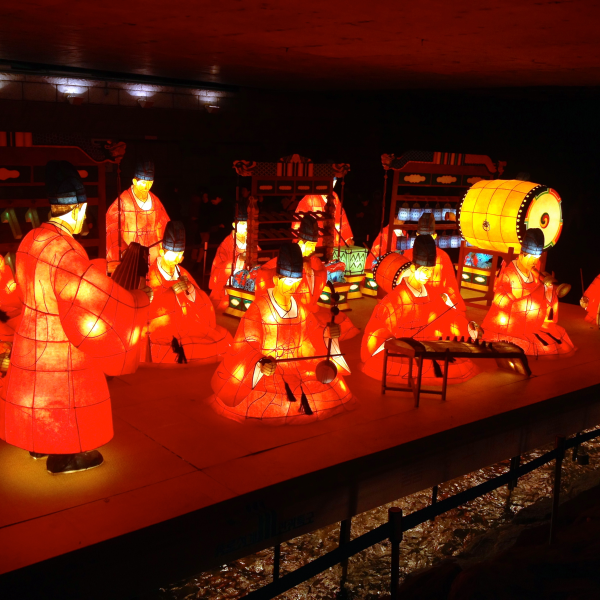 This lantern depicts the music that was played during the commemorative rites at Jongmyo shrine. I remember this lantern (or one very, very similar) from my very first day in Korea in 2011, when I caught the end of that year's festival. Definitely feel a certain amount of nostalgia for that first overwhelming day in Seoul when I see it. 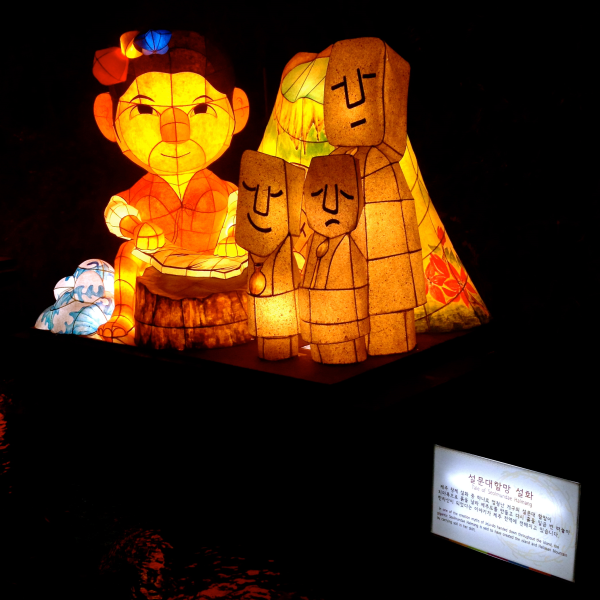 This lantern is called "Tale of Seolmundae Halmang," which the sign says is a creation myth from the people of Jeju-do. "The gigantic Seolmundae Halmang is said to have created the island and Hallasan Mountain by carrying soil in her skirt."

Every year, multiple lanterns are created in the likeness of various kings and queens from Korean history, always beautifully colorful and eye-catching. The royals pictured above are King Danjong and Queen Jeongsun of the Joseon Dynasty. 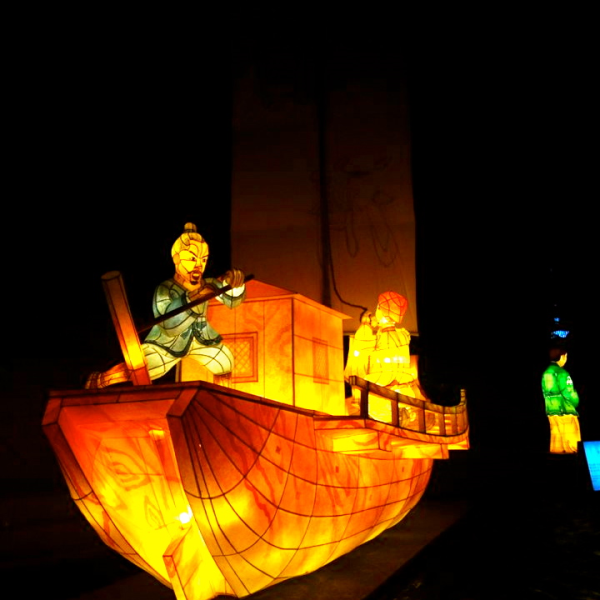 The construction of these lanterns fascinates me, from the frame underneath to the coverings they use. This lantern is of a Baekje ship, which were respected at the time for being sturdy ships. 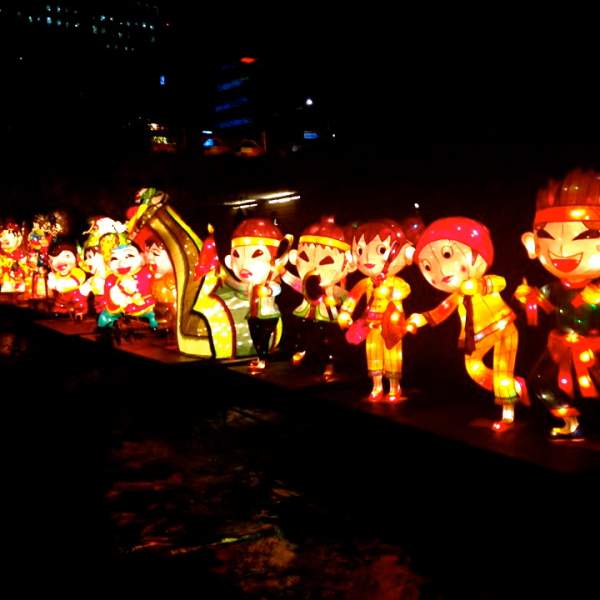 The theme this year also focused on "Baekje's spirit of harmony," which included lanterns representing the cultures of other nearby countries.

Kind of freezing, but still enjoying myself. 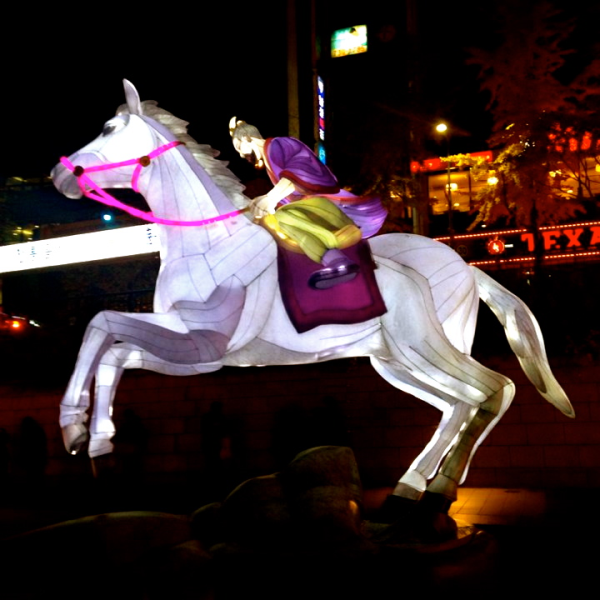 The lanterns this year really upped the ante from previous years -- this year some of them moved! This guy, who happens to be King Onjo and the founder of the Baekje kingdom, leaned back and forth as his horse bucked up and down. Impressive! 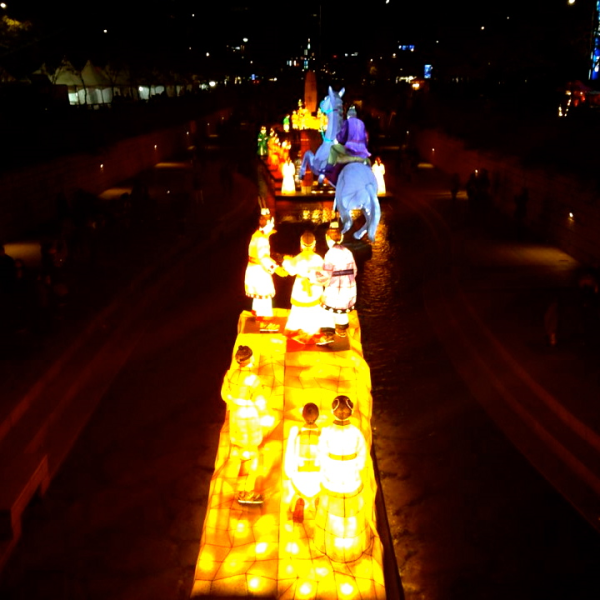 Another aerial shot of the stream. I definitely recommend going late at night -- just look at how empty it is! 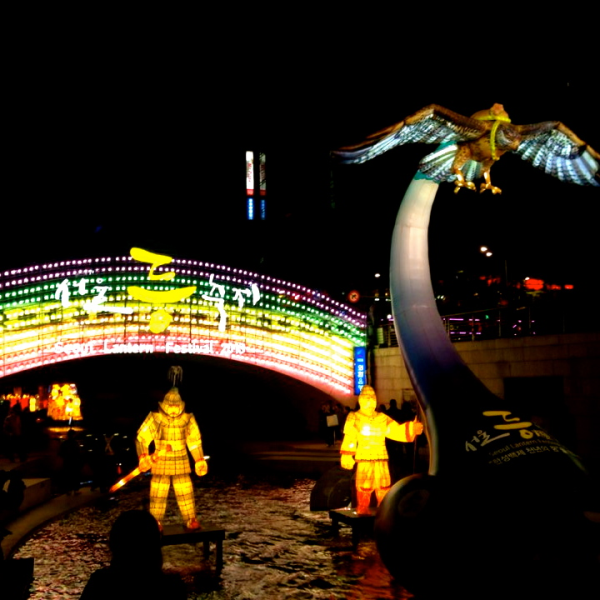 Lantern festivals never disappoint. They're always pretty, colorful, and a nice way to spend an afternoon or evening. I highly recommend making time for one of Korea's many lantern festivals during your time here!

Have you been to the Seoul Lantern Festival? Or any other lantern festivals in Korea? Share your favorite in the comments below!