A Korean Bucket List Part 2: Unique Places to Visit While Teaching in Korea

Living and teaching in Korea is filled with unique experiences. Often opportunities arise that should not be missed! Life in Korea can be filled with adventure if you embrace new challenges and venture outside of your comfort zone.

So what does it take to truly embrace Korea? The only way to see the country and understand the people, is to travel into the countryside or to local areas. Go beyond the tourist spots and find yourself stranded among rice paddies or the mountainside. Rural Korea is where the heart of Korea is. Most people who live in the bigger cities grew up in the countryside. If you want to understand your Korean friends, it is important t understand their upbringing and where they come from. 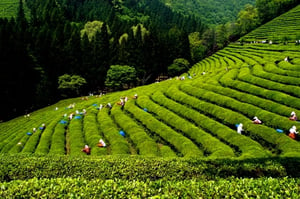 Boseong is in the southern parts of the peninsula and is considered the birthplace of Korean tea. In the summer time the fields are rolling with lush hedges that plenty of tourists venture to see. There is also the annual Boseong Green Tea Festival which is held in the month of May. The festival attracts a large amount of visitors who enjoy walking through the green fields, eating green tea ice-cream, and drinking green tea lattes. Tourists can also pick tea and watch how it is dried and sampled into boxes. 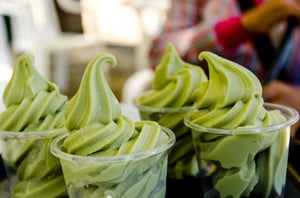 Boseong is the largest commercial tea-selling area in Korea. It is the heart of the green tea industry and most of the green tea you drink in Korea is grown there and the province of Jeollanam-do. The famous Boseong Cedar Road is a spectacular pathway to walk on. It is lined with towering Cedar trees that fill the entire street and you can see the locals working in the tea fields, busy picking leaves and packaging them after drying. 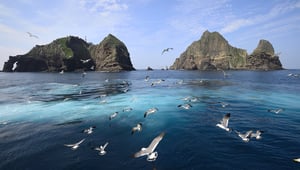 Dokdo Island is probably the most spoken about islet in the peninsula. The island is not only beautiful but also a controversial topic among Koreans. Dokdo has been hotly debated as whether it is Korean or Japanese territory. The two countries dispute about this piece of land often and in recent years petitions and protests against the Japanese government for the true governance of Korea over Dokdo, has created quite a discussion causing it to be a great tourist attraction.

Dokdo Island is formed out of volcanic rock and is nearby the famous Ulleongdo Island, in the East Sea. The island is made up of two islands, Dongdo and Seodo and has two famous caves called Hyeongjegul and Cheonsanggul. From Seoul, you have to catch a bus to Pohang, and then from Pohang harbor you need to catch a ferry to Ulleongdo Island, connecting to Dokdo Island. 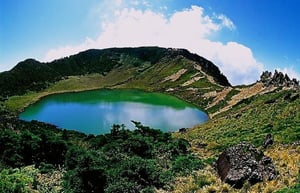 3. A Natural Wonder of the World: Mt. Hallasan Crater

Jeju Island is a must travel to destination while living and teaching in Korea. The island is known for being the 'Hawaii of Korea' and has some of the most superb beaches to relax on in the Summer months. Mt. Hallasan is located on Jeju Island and when traveling around the island it becomes the central point of focus. Mt. Hallasan became one of the Seven Wonders of Nature in recent years and rightly so. It is not only the highest mountain in Korea, but also a dormant volcano. The mountain is comprised of volcanic rock that makes up its magnificent terrain and outer exterior. 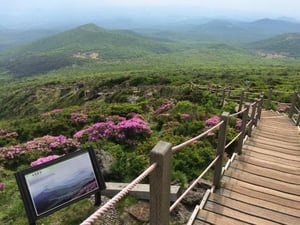 Mt. Hallasan is a great hiking destination all year round, but in the Summer months the mountain is filled with Hallabong oranges that can only be found on Jeju Island because, of its unique soil and climate. There are six hiking trails to venture on, however the most recommended would be the trail that leads you to the famous Hallasan crater called Baekrokdam. You can take Gwaneumsa trail and Seongpanak trail to reach the summit of Hallasan mountain. The crater has been known to boast beautiful scenery all year round, especially in Spring when it is filled with flowers.

How to get there: Fly from Seoul's Gimpo Airport to Jeju International Airport 40mins. Catch a local bus to Mt. Hallasan 2hrs. 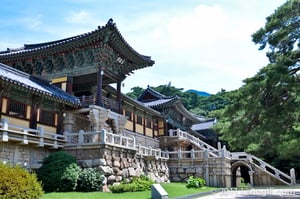 4. The Ancient City of Gyeongju

Gyeongju city is a UNESCO World Heritage site because of all the history and ruins that exist in one region. The city is home to the oldest remains of the ancient Silla Kingdom, which is comprised of five major areas. The city is filled with ancient temples, old hanboks and fortress walls. It is the perfect place for foreigners to experience the ancient Korean lifestyle that has become a very important cultural focus point of modern day Korea. Also, it is one of the few remaining historic sites of this particular era due to Japanese occupation and the destruction of most Korean cities and sites.

Gyeongju is located in the southern parts of the peninsula in Gyeongsang province. The Silla Kingdom ruled two-thirds of Korea during the 7th and 9th centuries and it was a powerful and mighty empire. The Silla Dynasty was a wealthy and prosperous empire that became one of the fourth largest cities in the world. Gyeongju is famous for tourism due to its large vast archaeological excavations and cultural heritage.

How to get there: KTX (speed train) Seoul Station to Dongdaegu Station and transfer on the Mungunghwa (slow train) to Gyeongju Station 4hrs

5. The Best Beaches by Naksan Temple

Naksan Temple is located in the Gangwondo province in the north-eastern parts of Korea. The seaside temple is one of the most magnificent temples in Korea. It is surrounded by the top beaches in Korea with the whitest shoreline. The temple is 1,300 years old and was built by the Silla Dynasty. There is also a giant statue that overlooks the East Sea with a magnificent panorama of the area and the royal blue East Sea. 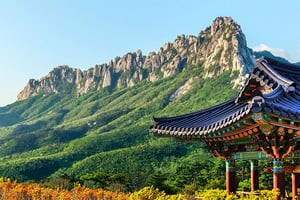 The temple is located on Naksan Beach which is one of the best beaches to visit during the summer months. If you go a little further down the coastline you will find Gyeongpo Beach. Gyeongpo is rated as the best beach in Korea because of its exclusivity and beauty. This part of the coastline is the only region in Korea where you can find white sand beaches that are truly magnificent comparable to beaches back home.

The area is also unique because of its location close to the border and if you venture into Sokcho city you can find a small North Korean community that will offer you some interesting stories. There is also the famous Sorak National Park that is must see.

How to get there: Seoul Express Bus Terminal to Sokcho Bus Terminal 3hrs. Local buses run along the shoreline from Sokcho to Naksan 20mins.