Korean Health Care: One of the Most Efficient Health Care Systems in the World

When you are in a foreign country, whether to travel or to Teach English the last thing you want to do is visit a hospital. Many people that explore the world face getting sick or having an traumatic accident. Thankfully, expats that teach in Korea do not need to worry because  the Korean health care system is one of the best. This is especially true if you are working for Chungdahm and are covered under the national health insurance plan. Below I detail some of my experiences dealing with Korean doctors, from a sprained ankle to a stomach bug, and how each time the service I was given proves how good the Korean health care system is. 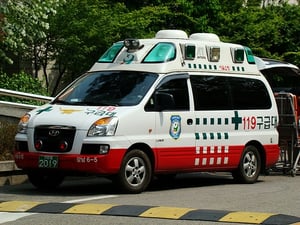 "I had no appointment & I was seen within minutes"

Visiting a Doctor in Korea:

I do not tend to get sick often, however, when I do get sick, I  get very sick – which is why when I became sick suddenly in Korea, I decided to visit my doctor to get some medicine. In Korea you visit the hospital to see a doctor, not an E.R. but a general hospital. These doctors can treat you for a range of illnesses from stomach bugs to fevers to back pains.  Luckily for me, I have only had to visit a Korean hospital four times in my two years here.

My Experience: Gastroenteritis & Flu Care that Was Efficient and Affordable

My first visit to the hospital was a few months after arriving in Korea. Maybe it was the change of environment, or my immune system responding to the classroom environment, either way I felt really bad. I was experiencing flu-like symptoms including a fever, aches and pains. I found a local hospital, which turned out to be my go-to place for any medical treatment. After a 2 minute wait in reception I was sent to the second floor, where a doctor would see me. I love how efficient Korean medical care is: while I waited on the second floor to see a doctor (for only 8 minutes!a) a nurse checked my temperature and blood pressure and relayed the information to the doctor. The doctor prescried medicine upon completing his examination. A nurse then gave me an injection, and a prescription. A few hours after receiving the injection I felt much better. The total time spent at the hospital was 20 minutes from entering to exiting, and it cost only  7,000 KRW or less than $6. Also, my one-week prescription  cost just 4,000 KRW or less than $3.
I had a bad stomach ache the second time I went to see the doctor in Korea. Within two minutes I was directed up to the 2nd floor. While waiting to see the doctor a nurse took my temperature and blood pressure. This time, I had to take three injections and a lot more medication to be filled on my prescription, however, thanks to the national insurance scheme, I only paid 15,000 KRW or less than $14 for the visit.  Also, my prescription was only 7,000 KRW or less than $6. For a week, I took anti-biotics, anti-dehydration fluids, and fever regulators all for $6.

Recently, I fell while running and incurred a bad sprain. I suspected I sprained / fractured my foot so my boss took me to a special hospital which deals with this type of injury. This was more like an E.R. service as it was kind of late in the evening, around 10.30pm but even at this time I did not have to wait long. After 10 minutes in the waiting room, I saw the doctor who ordered an x-ray. After waiting another 10 minutes two x-rays were taken and I was back with the doctor.  I then was asked to come back the next morning to see the specialist.  In the interim I was given a cast and boot to wear. The total for this visit and some pain killers was a total of 30,000 KRW which included the two x-rays, less than $27.
The next morning I went back to the hospital, and after a 10 minute wait, I saw the specialist who recommended the cast and boot for 1 – 4 weeks. This visit only cost another 30,000 KRW which actually included crutches and a new boot and cast. That’s less than $27!
Thanks to national health insurance , if I need medical care while here in Korea, I pay only a small fee, known as a contribution fee.  My employer pays 50% of my medical insurance and I pay the other 50%, which actually amounts to something like only 4% of my salary each month.
Advice: There are many hospitals in South Korea. Some hospitals are general hospitals that will treat most ailments, thers are special hospitals, for broken bones or sports injuries etc. Then you have hospitals for both men and women. Find a hospital that is close to you and that will suit your needs.  Feel free to ask a Korean friend for a recommendation. Once you have a hospital you can go here any time you need to, or even just for a check-up.

John May grew up in Dublin, Ireland where he is from & went to Trinity College – one of Irelands best known universities. He graduated from here in November 2012 with a B.A. (Mod) in Geography & Sociology. John has always had a passion for travelling having been to most of Europe, he decided to explore Asia after Uni. He had always wanted to teach and thought what
better way to travel than teaching English on the way. John is currently teaching English for CDI in Daegu, South Korea a position he found through Aclipse; John has just started his third year here and he loves every minute of it!