Chungdahm Teachers Report at the 2016 World Knowledge Forum in Seoul

One of the perks of teaching in Korea for a company like Chungdahm Learning are the growth opportunities that allow you to grow professionally.  Whether it's advancing within Chungdahm itself, or opportunities outside of school, there are many ways to enhance your resume while teaching abroad.  This past week, I, along with fellow Chungdahm teachers, had the chance to report at the 17th World Knowledge Forum in Seoul. The World Knowledge Forum is Asia's biggest collaboration of knowledge -  with this year’s theme being “Aiming for Great Instauration.” 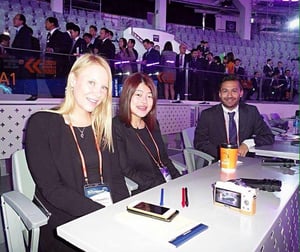 Simply put, ‘great instauration’ was the popular idea of scientist, Francis Bacon, who proposed that the arts and sciences needed to be restored and that a society would reach a great instauration when everyone equipped themselves with knowledge.

Bright minds from all over the world came to collaborate ideas and knowledge, with keynote speakers such as Wendy Sherman (U.S. Department of State Ambassador) , Dick Cheney (Former Vice President of the United States), Gerhard Schroder (Former Chancellor of Germany) and David Rubenstein (The Carlyle Group). 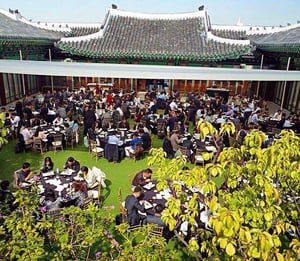 The event took place at Jangjung Stadium and the Shilla Hotel in the Dongguk University area. Chungdahm teachers were selected from various branches to participate as reporters for the Maekyung Media Groups’ - Maeil Business Newspaper. The Maeil Business Newspaper is Korea’s leading newspaper that is read by businessmen and corporate professionals. 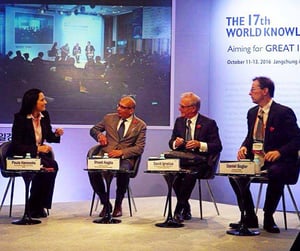 Initially, various branches had to submit resumes of qualifying candidates. Chungdahm was specifically looking for writers who had prior journalism or literary experience and had a background in politics, economics or international relations.

Once human resources had narrowed down the selection, chosen teachers were expected to complete an intensive training week at Chungdahm Main Branch. The training was one week before to the event and was hosted by the previous years’ star writer, Ethan Blonder. Ethan was also the Editor in Chief at the 2016 World Knowledge Forum. 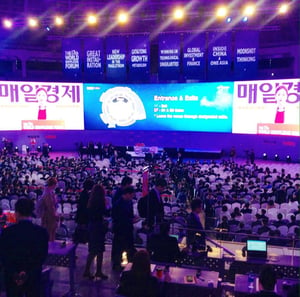 During training week, teachers were expected to learn about what a lead is and how to grab a quote effectively. They were also taught on how to write in AP style and to create a narrative without bias. After each session, teachers were given an hour to write articles, from a mock forum video they had watched.  Every evening, reporters would receive feedback and then be expected to apply that advice to their writing the following day.

The Week of World Knowledge Forum

Nine Chungdahm teachers were selected to attend the 17th World Knowledge Forum. Bright and early on Tuesday October 11th, Grace Nam and I met with Matthew Lee, FHR Manager at Chungdahm, and Ethan Blonder at Jangchung Stadium to report on the first session with Gerhard Shroder about “Brexit and the Future of Europe.”

Everyday reporters had about 3 sessions each and were expected to write an article within one hour afterwards. The schedule was mixed and sometimes there would be two reporters, a lead writer and a quote person, or an individual reporter. We also had to submit five quotes at the end of every session so that Maekyung Media Group could have them immediately. 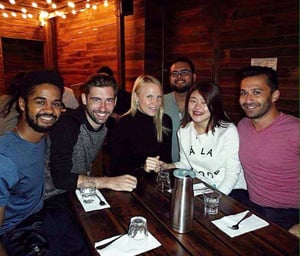 Once our article was completed and edited by our Editor, it would be uploaded onto the official WKF website. Participants could easily read about their session and get a feed from our live-reporting. It was also possible to download the article once it had been uploaded.

Everyday teachers enjoyed the Shilla lunch that was supplied by the fancy Shilla hotel in their temple and courtyard. Also, we got breakfast and delicious dinners consisting of Mexican, Samgyeopsal and Southern BBQ! There was a constant source of snacks and coffee, and all Chungdahm reporters got to stay at the Grand Ambassador hotel every night. 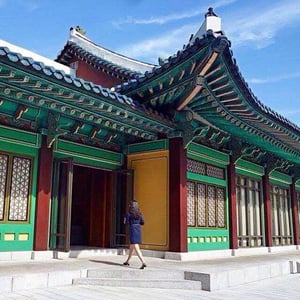 What did I love about this opportunity? 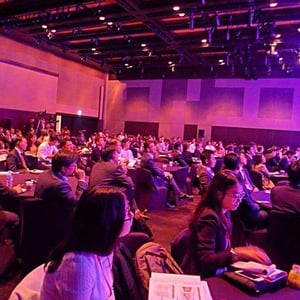 I got to spend the week with bright employees from various Chungdahm branches. We could all experience a different aspect of the company and share a different kind of knowledge. Also, it was exhilarating being in a press room again and feeling the rush of time constraints and pressure. A lot of fun was had by all participants! 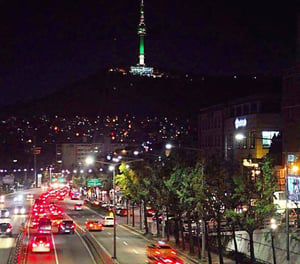 I got to add something new to my resume. Reporting on the WKF was an intensive ‘real-reporting’ situation and every article was a piece of hard-news journalism that has added to my CV and time well-spent in Korea!