Kongnamul Guk or Soybean Sprout Soup is the undisputed champion as Korea’s chicken soup for the soul. This is my go to soup if I feel a cold coming on, or if I actually do have a full blown cold. It is simply flavored with yellow soybean sprouts as the main ingredient and is typically boiled with green onion and garlic to give it some more flavor and nutrients. During the boiling process, the kongnamul's yellow heads remain firm, while the white stems become translucent and plump. Optional additions many people like with this classic soup are anchovy, beef, egg, and red pepper flakes.

Kongnamul Guk is a staple of my diet and many Koreans because it is simple, clean and refreshing and can complement many different foods. It is especially great to balance out spicy, fried and oily food as it is light and soothing to the stomach. Another functional benefit is it aids with brain development of children and can help them fight off the flu and colds during the winter season. 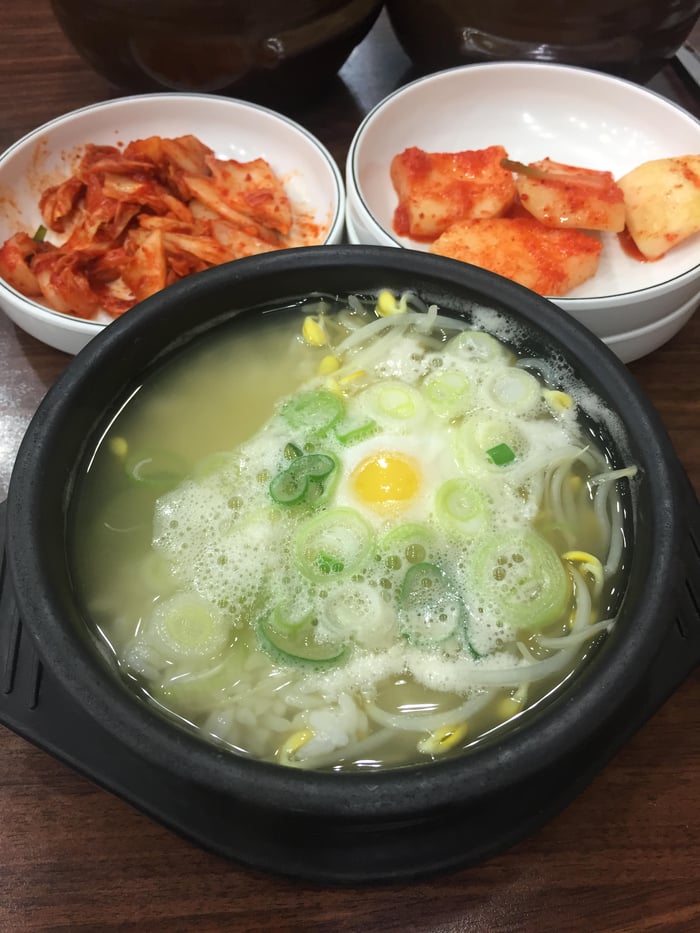 On the other end of the spectrum is a popular soft tofu stew that is hot and spicy and can make even the seasoned spicy food lover sweat during consumption. Sundubu Jjigae is prepared and served with freshly curdled soft tofu, onions, mushrooms, garlic, seafood, soy sauce, and gochujang or red chili paste in a vigorously boiling hot porcelain pot. At many traditional restaurants, you will have the option of adding an additional raw egg that is available on the side, which should be added while the broth is still hot. This stew like most others is eaten with a bowl of rice and several small side dishes known as (반찬 banchan).

Sundubu Jjigae is my favourite Korean stew because it provides a lot of flavour and nutrients. In addition, it is hearty and refreshing especially during the cold winter months. Interesting to note about this hot and spicy stew - records from the Joseon dynasty archives show an early form of sundubu jjigae. If you are a spicy food lover, I recommend this when you arrive in Korea, and you are sure to add this to your favourite foods list. 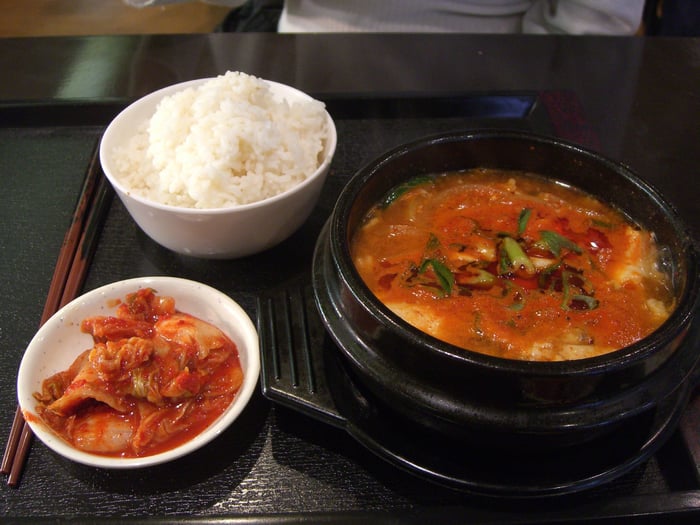 Doenjang Jjigae is another favourite traditional Korean stew that is simultaneously savory, spicy, and sweet. Doenjang is the main attraction of this stew, a fermented miso paste, but it is also loaded with potatoes, onions, garlic, zucchini, mushrooms, tofu, seafood and a hint of gochujang for some spice. The earthy flavor of soybean paste is fused with Korean vegetables and soft tofu. This combination makes this stew a well rounded comfort stew anytime of the year.

I typically like to eat this late at night after work, but many Koreans like to eat this for breakfast and anytime in between. Doenjang Jjigae complements a variety of meat and fish dishes such as bulgogi, kalbi and grilled fish. This is another staple Korean stew I suggest you try as a ChungDahm teacher working and living abroad. 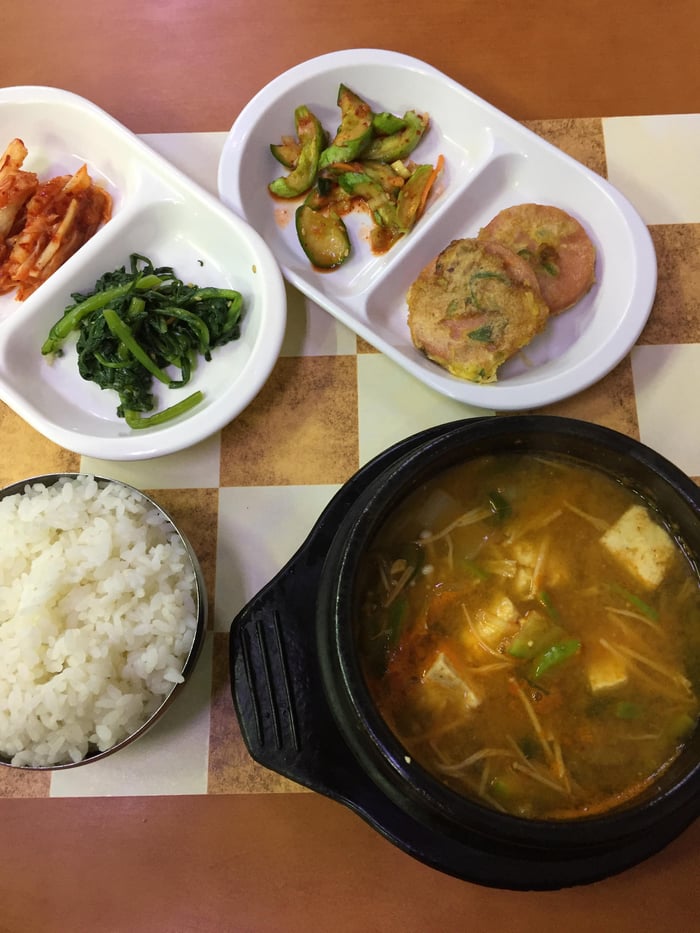 Gomtang or gomguk is a light brown soup boiled with various cuts of meat, onions, green onions, garlic, noodles and requires soy sauce, salt, and pepper to add some taste and flavour. Typically, the leg bones from the cow are boiled in a pot for many hours, sometimes up to and over 10 hours. The longer the soup bones boil, the thicker and creamier the broth will be, producing a deep taste and nutrition from the marrow that adds more flavor to the soup.

This is one of my favourite soups with added meat despite the fact it doesn’t have a distinct taste that can be classified as spicy, sweet, salty, sour, or bitter. Gomtang is still very tasty and nutritious and helps me when I feel tired and need some energy and strength for the rest of the day. If you love meat and soups, this will be the perfect combination for you to enjoy in Korea. 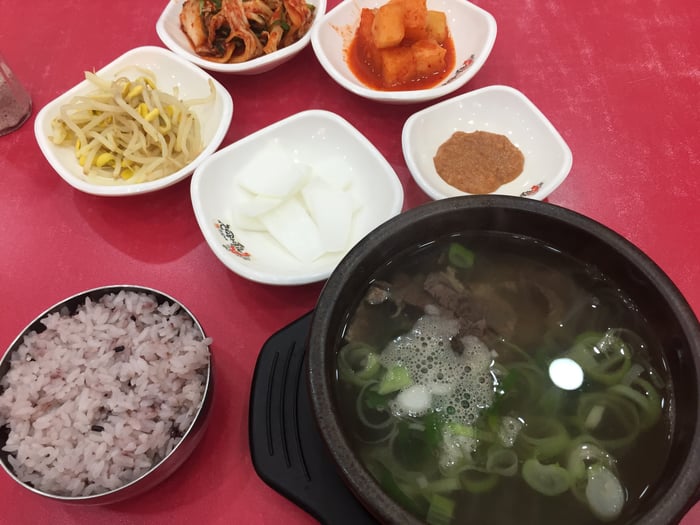 Be sure to enjoy these healthy, nutritious, and tasty soups and stews in Korea. Many restaurants have their own unique version as the taste and quality can differ greatly depending on the restaurant and quality of ingredients used in the cooking process. Other popular soups and stews you can try are Kimchi Stew or Kimchi Jjigae (김치 찌개), Rice Cake Soup or Tteokguk (떡국) traditionally eaten during the celebration of Korean New Year, and Spicy Pork Bone Stew or Gamjatang (감자탕). As a ChungDahm teacher, your stomach will thank you while enjoying these delicious and nutritious soups and stews in Korea.