How I Spent My Chuseok in Thailand!

Chuseok, as mentioned in Melanie's blog last week,  is a Korean national holiday that happens every September. It is a time where families get together, prepare traditional foods, visit the graves of ancestors and enjoy a much needed vacation. It is pretty much the North American equivalent of Thanksgiving. In more recent years, families, along with teachers at ChungDahm, have used the few days off to travel to other countries, and as a result it is one of the most expensive times of the year to travel.

Fortunately, I managed to grab a decently cheap flight, from Expedia.ca  flying with Air China and Air Asia to Thailand a few weeks prior for the 5 days I had off. I had some friends who were back packing through South East Asia at the time and they had already explored the bustling capital, Bangkok, and were heading north for some necessary relaxation amongst the countryside.

After a terrifying layover in Beijing, where the plane took off in a lightning storm, I landed in Chiang Mai, which is one of the biggest cities in Northern Thailand. As soon as I arrived I noticed that drivers drove on the left side of the road, and coming from countries that only ever drove on the right, apart from tractors at home which took up the whole road either way, it was a little getting used to. I arrived at the Bunchun Art Hostel where I met up with my friends. The hostel was decorated by art by local artists and had a very bohemian feel. 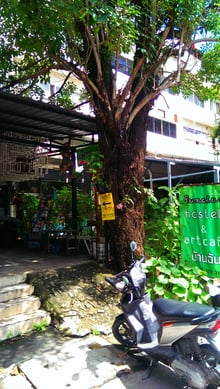 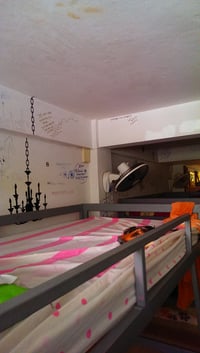 The next morning we grabbed a bus to Pai which was about a 2.5 hour trip north. The trip was winding to say the least. A fellow traveler told me the trip consisted of 762 twists and turns! Many people on the bus heard beforehand and took motion sickness pills before they boarded, we however did not. When we arrived to Pai I was completely enamored. It was such a quaint, friendly, lively town, run by every hippie and free-spirited thinker in Thailand.  Our hostel was called Pai Circus just outside the hub of the town. It was run by foreigners who put on different circus acts throughout the week. We managed to see an impressive fire show! 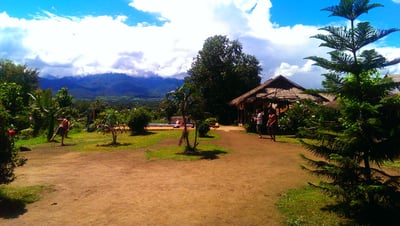 What was great about Pai was that everything was so cheap, especially compared to Korean standards, which are already quite inexpensive. Our first meal was traditional Pad Thai, it cost me 50 baht, which was the equivalent of $2 Canadian. We also rented scooters, which was the most popular form of transportation in town. It cost us 100 baht to rent the scooters for 24 hours. They were surprisingly easy to learn and so simple to drive. 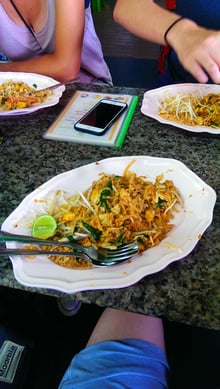 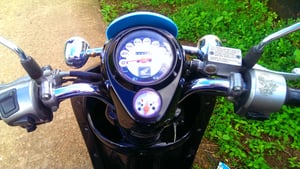 The first day with them we drove through the mountains to a natural hot spring. It was refreshing to see so many Thai families there instead of tourists. The second day we drove them to a look-out spot where you could see the whole town from the top of a mountain; the view was breathtaking. We also managed to find a waterfall! 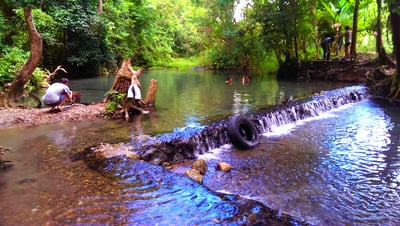 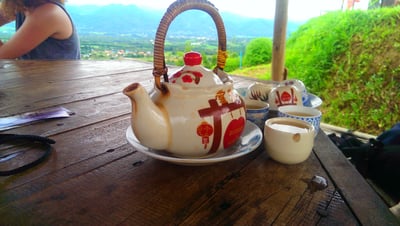 Tea at the Pai lookout spot 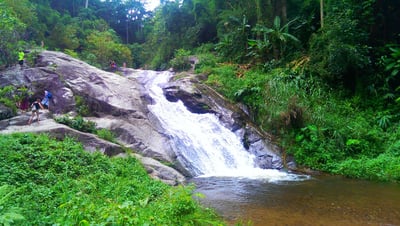 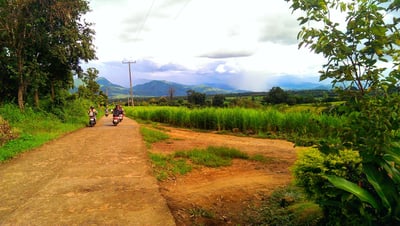 Amazing Views wherever you drove

When we took the minibus back to Chiang Mai, I had one night left. I decided to use it to explore the famous night market! It was there that I found all my souvenirs and even tried the fish tank pedicure, which felt extremely strange! 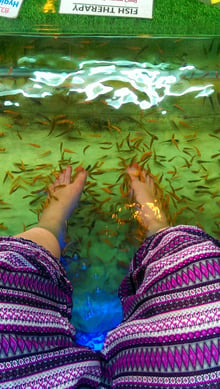 The next morning I took a tuk tuk, which is a 3-wheeled motorcycle with a 2 person seat in the back – very common in Thailand, to the airport. I landed back home in Busan Monday morning and wistfully began work again. 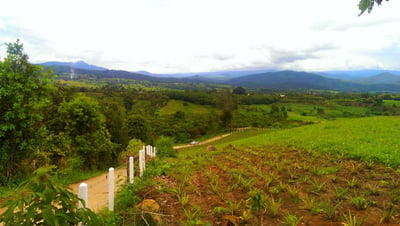 One of the perks of teaching in Korea is that it is so convenient to travel to other countries, even if it is for a brief time.  If you do by chance come to teach in Korea I highly recommend visiting the "Land of Smiles."