As I approach my 6 month anniversary of teaching in Korea, I've been reflecting on my time here thus far. One of the things that amazes me the most is how many things I've managed to do so far, yet I still feel like I've only seen a small fraction of the sights. Korea is huge and so diverse! In 6 months I've been to the all the major tourist attractions in Seoul- from Namsan, to Noryangjin... Gyeongbokgung, Myeongdong and Dongdaemun. I've partied in Itaweon, Gangnam and Hongdae making friends while probably drinking too much soju. Ok... definitely drinking too much soju!

Despite all of these experiences, there are still a vast number of things to do and experience here in Seoul. I find my weekends very busy lately, especially with the spring weather in Korea which is divine (minus the yellow dust!).

This past weekend was one of my favorites thus far. On Saturday I ventured over to Yangjae, which is is Southern Seoul. Yangjae has a large Citizens Park that was created in 1986, for the 1986 Asian Games, as well as the 1988 Olympics in Seoul. It also has a massive flower market (the largest in Korea) that boasts a large variety of plants, flowers, trees, orchids, succulents, cacti- you name it they're there! 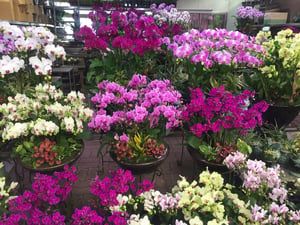 The flower market is very easy to find. From Yangjae Citizen's Forest subway station, take exit 4 and head straight for 200 meters. You are instantly greeted by the smell of fresh flowers, which is very welcoming given the dusty weather lately. There are rows on rows of stunning botanical gems, and one could easily spend an hour wandering through the enormous market. The highlights for me included the adorable succulents that are so tiny, as well as the Venus Flytraps. There is also a wholesale auction that happens early weekday mornings, which I have heard is quite interesting to observe. I definitely will have to go back! 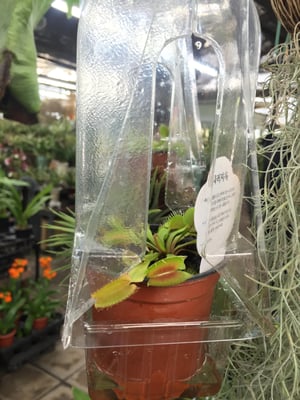 After wandering through the market, I met some friends in the Citizen's Park for a stroll. It is easily accessed from Exit 5 of the Citizens Forest subway station. We all enjoyed strolling through the park, and bumped into some sort of (what we assume to be) Japanese cosplay event! There were a bunch of characters dressed up in elaborate costumes having photo shoots all over the park, so naturally we had to ask for a picture! That's one of my favorite things about Seoul- there's always something unexpected happening, which makes it such a fun place to be. 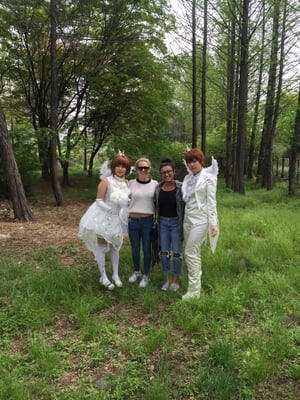 We also stumbled upon an acupuncture path, which was designed to "massage" acupuncture points as you walk barefoot over the stones. We had an interesting time walking over the different sized stones, for about 20 minutes. There was a sign that showed which pressure points on the foot are related to different body parts. Apparently, getting those pressure points massaged (by walking on the stones) could relieve certain symptoms of the associated parts. I'm still unsure about the legitimacy of it all! We ultimately agreed that the process was more painful than relaxing- but after we put our shoes back on we felt relieved. Was that the point? I really don't know... regardless it's worth checking out, maybe you will find it much more healing than we did! 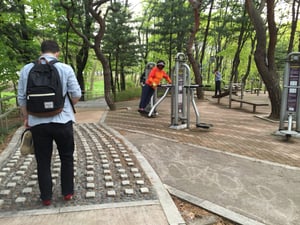 Saturday night was a relatively early night due to a 4:30 Am wake up time! Since moving to Korea to teach for Chungdahm, I have enjoyed being able to maintain an active lifestyle. I live a short walk from the Han river, and have taken up running, almost daily. I never thought running would be something I enjoy doing, but there are so many amazing places to run throughout Seoul, and it's great exercise! For those interested in racing long distances- there are numerous runs during every month of the year in Korea. On Sunday, my friend and I signed up for a 10K, which was easily found by researching online. Many running and race websites are available in English, which makes for a simple sign up process. The race we ran was called the Chosuniblo Seoul Half-Marathon, which offered a 10K as well. 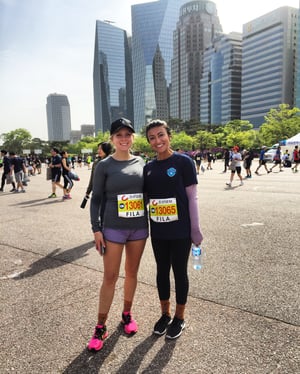 I had no idea just how much FUN running could be! Despite the early morning meeting time (we had to be at Gwanghwamun Square for 6:30 AM), I was filled with energy and adrenaline. Our 10K took us from the city square, to Yeouido Hangnang Park, through city streets and over the Mapo bridge. There was such a positive energy in the crowd, and even though I didn't understand a word of the pre-race chants, I had a massive smile on my face the entire time. The run was tough, but a super pleasant experience. Despite training for about a month now, we managed to finish in 50 minutes, which we were both pretty happy with. Next month we are running the Nike women's half marathon, so this was a good warm up! 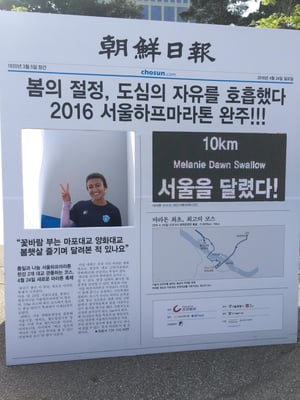 After a quick shower, we headed to Itaewon for brunch at a restaurant that has quickly become one of my favorites! The Flying Pan  offers all day brunch, with organic ingredients and meals that remind me of home. They have a menu with typical American breakfast items- a variety of French toast, pancakes, omelettes, and eggs Benedict. The Flying Pan is located a short walk out of exit 2 at Itaweon station (line 6). I scarfed down an avocado and chicken sand which, and my friend had eggs Benedict. There is nothing better than eating after a race, let me tell you... especially if there are grapefruit Stiegl Radler's involved! 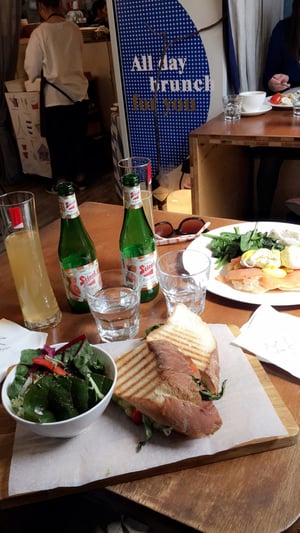 After brunch we wandered around Itaewon, and met up with some friends in Dongdaemun for some walking, before heading home and passing out. I left this weekend feeling super refreshed, and motivated to head back to work. I find the best way to beat the Monday blues is to have really fun weekends planned to look forward to, as well as reflect on. I feel extremely grateful for all the memories I have made already, halfway through my time here. Moreover, I am so excited for everything that is still to come during my year teaching in Korea!