Transition can be a scary thing for people. This is especially so when you are staring down the barrel of moving, not only to a different apartment or city, but an entirely new continent. This inevitably brings us face to face with new culture, language barriers, different foods and different ways to travel. Some people are very excited for all these things; this is what travel means to them. Others view many of these new facets of life with trepidation.

Personally, I think that I fall almost in the middle of this spectrum with a little leaning towards overall excitement. However, it still had its difficult moments when I first transitioned from America to South Korea. The best thing for me to do was to move not just myself, but some of my relaxing and grounding habits over from the States.

I moved from the Rocky Mountains of Colorado and spent a lot of time being outside. I grew to really rely on this time outdoors to center myself. When I moved to Korea, it took me a while, but I finally figured out that this is possible to bring to Korea as well! Camping is very popular here as is hiking and getting to spend time outdoors.

The first thing that I did to facilitate my adventures outdoors was to invest in a bike. There are many for sale from other expats on Facebook groups and the like. If you intend on really utilizing it, you may want to look at bike shops. My bike was a great decision and allowed me to cycle out into the country and to the base of several surrounding mountains. This is also very popular with my friends. They often jump on their bikes and have cycled from Jeonju to Busan as well as other destinations around Korea. Although my gear wasn’t great for this, there are plenty of people selling lightweight gear that works well for taking on a bike.

The next thing I did was buy a tent and sleeping bag from an expat group. There are great camping spots all over Korea. There are specific websites that are pretty straightforward to reserve a spot early in the great national parks. However, if you are looking for a little more peace and quiet, and like I did, don’t know where to find it, then the best thing to do is join a camping or hiking Facebook group. I was late to this bandwagon, but once I caught on, I felt like the Korean hiking group I joined opened up all of Korea for me. Suddenly, I knew of all sorts of spots people were talking about in the woods where it was legal to camp and had beautiful open areas next to happy, burbling streams. 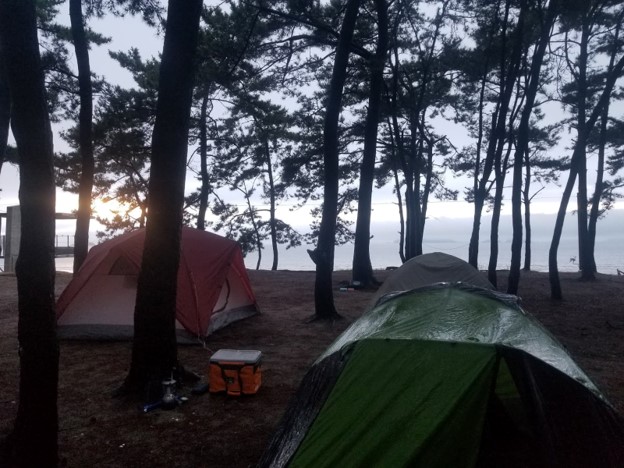 My favorites, though, were those camping spots in pine groves near the ocean. These incredible spots were generally more spacious and spread out, with friendly people as neighbors. Many Koreans that camp don’t camp exactly how many Westerners think of camping, but instead generally are classed as “glampers”. This just means that they come VERY prepared and generally camp in their RVs or with blow up mattresses and a whole kitchen of supplies under their tarps along with karaoke machines! It took me a while to get used to this, but it generally means that they have lots of food and lots of fun! Many times they are also extremely inviting and before you know it, you are having a camping party!

If cycling isn’t an option, or you just don’t want it to be, then the best way I found to reach my camping destinations was actually public transportation. Using the intercity buses to reach the city nearest the area I wanted to camp in was my first step. Then, because of how much Koreans value their camping and outdoor spaces, there was almost always a public bus that would run all the way up to the campsite, or at least the entrance. If not, there was always taxiing, although using the public buses was much cheaper.

Whether you are in a city as busy Seoul or a small village that is coseyed in by mountains all around, making camping and hiking a part of your routine is always a possibility. It may seem like everything changes in life when moving from one continent to another, but in the end there are always enough similarities to help a traveler stay grounded and excited for new opportunities! Sometimes you just have to search the excitement out. In the woods. On a mountain. 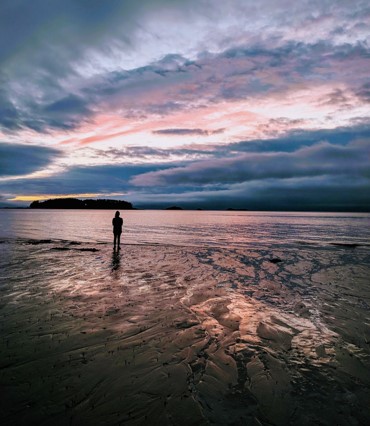 Amanda Williams originally comes from Aberdeen, South Dakota. She graduated from South Dakota State University with degrees in Horticulture and Spanish. She had always dreamed of being able to travel the world. Since leaving Aberdeen, Amanda has had the opportunity to travel to Central America, across Europe and now into Asia. She loves getting the opportunity to live in another country and learn about Korean pizza toppings, driving defensively, and what it’s like to get a hug from every side at once! She can’t wait to find out what else Korea is going to teach her as she continues her year and looks forward to discovering more of Asia.