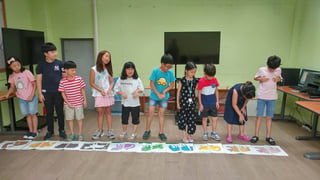 The Hybrid program offers kids a schedule that takes into account their vacation and spans the length of three to four weeks. Students have a fun month where in classes are mixed up and kids get to play more, learn magic tricks, and perform stories, songs, and plays and at the end of the month, the kids get to perform for their family and friends! 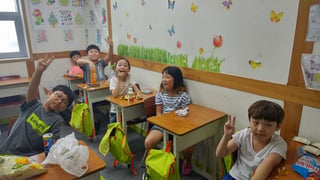 For our summer 2017 Hybrid program, I taught Seedbed 1, Seed 1, and Seed 2 levels. So, the ages ranged from about 7 years old to 10 years old. We had a ton of fun! My Seedbed 1 class performed ‘Brown Bear, Brown Bear, What do You See?’ and each student chose a different animal. My Seed 1 class performed a story called “The Twelve Animals,” which is about a hungry dragon who wants to eat the other animal-inhabitants of the world.  Luckily, the other animals teach Dragon about sharing the world with your friends instead of eating everyone. And lastly, my Seed 2 students hands-down had the best songs and performed an abridged version of “The Lion King.” They had so much fun with the dances and characters and the parents also really got into it. Who doesn’t like ‘Hakuna Matata!?” 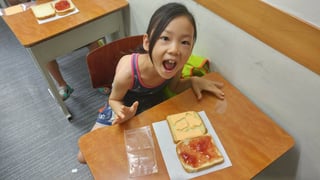 All in all, Summer Hybrid was a huge success and the students and teachers alike enjoy the time well-spent learning English and having fun. Now that the fall term is starting, I will be teaching the same children for the next three months. I teach certain classes/levels of students on a Monday-Wednesday-Friday schedule and other students on Tuesdays and Thursdays. Instead of teaching songs and plays, we’ve resumed regular classes wherein we teach English from ready-prepared online programs. But one of the most significant differences between Hybrid and regular terms: the time. Instead of coming to work at 9am in the morning, we get to sleep in and arrive at 1:00pm…can’t complain about that!  Be on the lookout for Marc's blog later this week where he writes about how to prepare for a new term.