My Five Favorite Parts of Living and Teaching in Korea

Hi, my name is Aleco from Seattle, Washington in the United States and I began teaching in the April Program at Chungdahm's Busan Goeje branch this past June.  I decided to write this blog for potential candidates thinking of teaching abroad so they can get a good idea about some of the perks of living in a country like Korea.

During my last few hours in Seattle before flying to Korea, I sat down next to a table of Korean businessmen to eat an airport hamburger. One of these men, Mr. Kim, was eager to introduce himself when he noticed me eating alone. He became visibly excited when he found out that I was going to be moving to teach English in Korea for the next year, and was more than happy to offer me advice about his home country. When I asked Mr. Kim “how does Korea compare to America?”, his response surprised me.

“Everything there is just better. You’ll see. Everything is faster, and cleaner, and safer, and costs less money. You’ll love it there!”

Though I took Mr. Kim’s words to be patriotic hyperbole, he really wasn’t kidding about everything in Korea being faster, cleaner, safer, and costing less money. No, Mr. Kim, not everything in Korea is better than America, but I’ve truly enjoyed my first month here more than I ever could have hoped for. Even though I had spent my last few months in America eagerly anticipating my move to Korea, this country has lived up to all my expectations and more.

Below are may top five favorite parts about teaching and living in Korea so far.

My biggest concern about my move to Korea was whether or not I would enjoy my job as a teacher. If I was spending 40 hours a week doing something I couldn’t stand, I probably wouldn’t enjoy my stay here no matter how well everything else was coming along.

I can happily report that teaching English at ChungDahm has been much more fun than I expected. Unlike my last couple of jobs, I’m genuinely happy to head into work every day. I am never counting the minutes until I can head home or wake up in the morning, and I honestly look forward to seeing my students every day.

Though I can’t really speak to what teaching is like in America, teaching Korean children is a delight. More than half of my students seem to genuinely enjoy their time in my class – they raise their hands in the air as high as they can for every question they know the answer to, yell with excitement during all of the English learning games we play at the end of class, and bombard with me questions about my personal life and living in America.

Though the majority of my students are very energetic, about a third of them are quite shy. The shy ones neither actively participate in class nor do anything to distract the other students, they politely perform their duties as a student and pray that I don’t call on them during speaking sections.

The rest of the students I have are a mixed bag, ranging from lovable class clowns to the actively uninterested. I’d be lying if I said there weren’t a few students who like to test my patience, but these kids are far outnumbered by the ones I completely adore. My students are the best part of my job, and they’re a big part of the reason that I enjoy teaching English as much as I do.

Korean food is one of the biggest reasons to move to this country – it’s delicious, it’s healthy, and it’s shockingly inexpensive.

Korean cuisine is quite different from the other varieties of Asian food you’ll commonly find in the states (such as Chinese, Thai, and Japanese). Generally speaking, it uses simple ingredients, is much less saucy than other Asian cuisines, is very spicy (which I personally enjoy), and is served unlike anything I’ve encountered before. The best Korean restaurants I’ve been to have special equipment built into your table which is used to cook the food you ordered right in front of you, such as the famous Korean barbecue setup or the shabu shabu table. 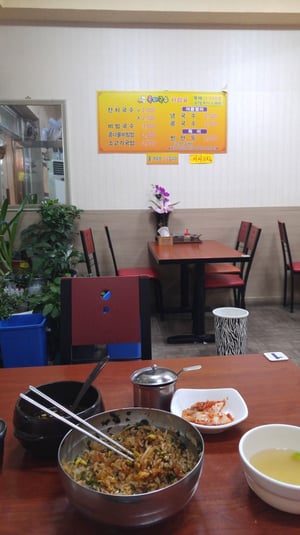 My favorite part about Korean food is its incredible variety. You’ll either be served a number of small dishes along with your main course or provided with a complimentary buffet. There will almost always be Kimchi (the most popular food in all of Korea), pickled radishes (my personal favorite), Miso soup’s Korean cousin, and a wide variety of house specialties. Some meals can be made up entirely of these small, delicious dishes – the Asian equivalent of Tapas. A meal I ate last week came with 12 different small plates, some rice, and a delicious sweet rice drink called “shikke”. The price? Roughly 13 USD for two people (or 6.50 each).

Much to my surprise, the food here is shockingly cheap. It’s actually more expensive to buy ingredients at the market and cook it at home than it is to eat out at a moderately priced restaurant. Pictured above is an order of Bibimbap (meaning stirred rice) at a restaurant near my apartment. It came with complimentary Kimchi, radishes, and Miso. As you can see on the menu, there isn’t a single meal at this restaurant which costs more than 3,000 won (roughly $2.75). You can easily eat two quality meals a day at a restaurant here for 12,000 won or less (roughly 10 dollars).

There are a few downsides to eating in Korea though. Many traditional Korean dishes are made very spicy – if you’re not a fan of spice like I am then you probably won’t get to enjoy a significant number of the best Korean dishes. Its also quite hard to find good food here that isn’t Asian or American. Though you won’t have to look too far to find a Thai or Japanese restaurant, I haven’t seen a single South American or non-Italian European restaurant in my time here. If I want a burrito in the next year I’m probably just going to have to make one myself.

3. The Cost of Living

With few exceptions, the average cost of goods and services here is notably cheaper than in the states. Here are a few examples (I’ve converted everything into USD):

Every restaurant bill and bar tab is also 15% cheaper in Korea, as its the norm not to tip here. They pay their servers and bartenders enough that they don’t need to be tipped, which is a win-win for consumers and service industry workers alike.

Of course, there are a couple of things that cost more in Korea than in America. Their coffee is a little weaker here than it is in the states, but a regular sized Americano at Starbucks will still run you $5.00. Imported American goods (such as designer jeans) are also quite a bit pricier. Rent can get a little high considering the amount of space you’re getting, but I can’t speak to this with too much authority as Chungdahm pays my rent.

Simply put, the amount of technology per square foot in Korea is much higher than it is the US. The average electronic device here is just slightly newer and nicer than a similar one in the US. Every elevator I’ve been in talks to you and has a much sleeker and more modern button panel what you’ll find in America, almost every cheap apartment has a small screen in the wall which is connected to a camera at the front door, and every bus stop in my city has a flat screen TV.

I haven’t sent a single text message my entire time in Korea thanks to an app called Kakao Chat, a third-party messaging application that I hope to bring back with me to the states. After using Kakao for a month I’m honestly shocked that Americans haven’t adopted a third party application as their messenger of choice. The difference between the number of features in your phone’s default messenger app and Kakao is enormous. Though I’m sure there are other apps out there that do the job just as well, the bottom line is that third-party messengers are where it’s at for daily messaging. Though I was skeptical at first, the Koreans really have us beat on this one. 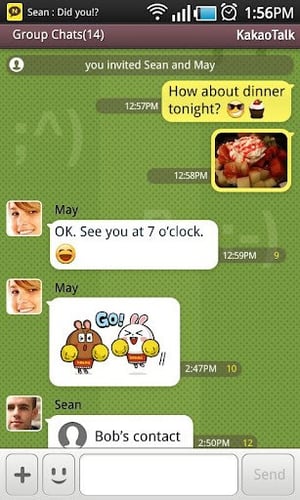 I also have to give a brief nod to the internet service over here. I pay less than half the price for 100 mb/s internet over here than I did for 24 mb/s Comcast internet in America, and I haven’t once had a disconnection of service. Even when I’m outside my house, half of Busan is a wifi hotspot. Every major cell carrier has wifi service available on the metro, and most restaurants and coffee shops have faster internet than I ever dreamed of having at home in Seattle. Shockingly, the download speed for my phone’s data is sometimes faster than my home internet connection. Most websites load faster for me over data connection than they do over wifi.

That said, outside of Korea’s internet there really aren’t any life-changing technological innovations in Korea that you can’t find at all in the states. Their modern infrastructure was simply laid down much more recently than in the US, which means that the average electronic device you’ll encounter in Korea is probably nicer but not fundamentally different from a similar American device.

As a dog lover and total sucker for Corgis, I could barely contain my excitement when I first visited one of Korea’s many pet cafes. For a little more than the price of a coffee, a dog cafe is place you can go to hang out with the employee’s and visitor’s dogs for as long as you like. You’ll be provided with some treats to help you make new friends, and the staff will happily bring you a lapdog if you’re shy about picking up a pooch yourself. Though I’m still missing my dogs back home, dog cafes will go a long way in helping me get my dog fix during my stay here. 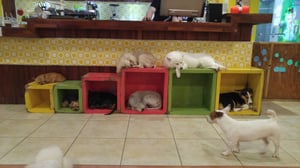 Though I much prefer dogs to cats, it's worth noting that cat cafes are even more popular than their canine counterparts. I’m sure it won’t be too long before I cave in and visit a cat cafe as well. I’ve even heard of racoon cafes as here!

Thanks for reading about my experiences of living and teaching in Korea so far! Until next time, 안녕하세요!