In my first year in Seoul, I left the city approximately five or six times. The city can get a bad rep for being too crowded, too commercial, or too concrete. Call me biased, but I tend to disagree. It’s easy to do so when the Han snakes through the city’s half and Bukhansan plops right in the middle. But don’t get me wrong--leaving Seoul once in a while is good for the spirit and for the lungs. One of my favorite places to venture to is perfect for a day trip. It’s peaceful, expansive, and right off Line 4 on the subway. After a long winter, my friend and I decided to make our way down and it ended up being one of my favorite days of the year. 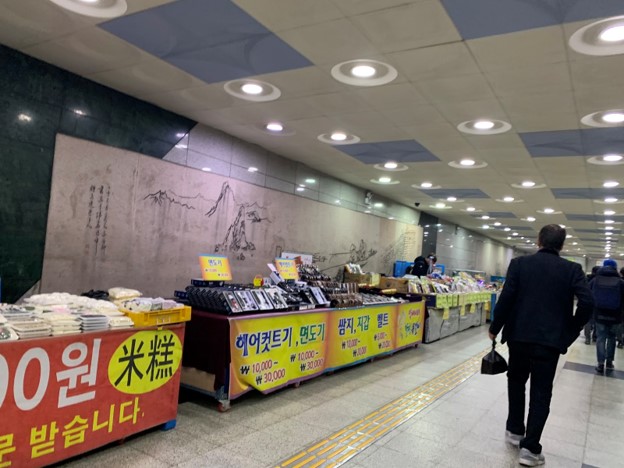 I biked to the green line at Jamsil and then transferred at Sadang going southward. The commute from then on was about fifty minutes. My friend was meeting me from Osan so I blocked that hour to make a dent in my readings. But it was hard to focus as the views outside shifted intensely and beautifully. A few stops out, it’s a stark contrast to the neon and bustle of Seoul. There is still plenty of noise and neon, but spliced by expanses of countryside. I ended up staring out the window for the majority of the time. And anyone who lives in a big city in the country can tell you that the train systems are huge, where you wait on average between four to ten minutes between them. Running into someone, at least as a foreigner, is highly unlikely, but for some reason it happens to me in the most uncanny places. I even recognize and run into students who have face masks on! As I was dozing off, the friend I was going to meet walked right by me. This was even more special because this was way out of the city! We spent the rest of the trip catching each other up on the ongoings of the new term.

We finally reached Ansan and it immediately made me feel at ease. We went to exit one and had to cross the street through the underpass. From the beginning, it reminded me of street markets in Bangkok or Hong Manila rather than Seoul, with the only identifiers being the traditional Korean imagery painted on the cement walls. Vendors were selling dried herbs, electronic accessories, and fried doughnuts, so I knew we were in the right place. When we exited to the other side, the real magic began. 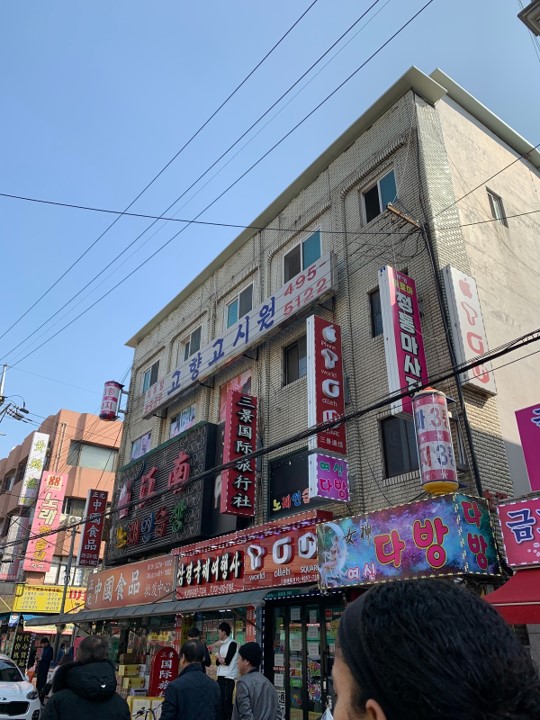 Growing up in Los Angeles and spending lots of time in the Philippines, I am much more comfortable in ethnically diverse communities such as Ansan, with louder folks and busy marketplaces.  All the building complexes in front of me had signs written in very little Korean, replaced by Vietnamese, Bahasa, and Mandarin. Ansan is the enclave for the immigrant community that is often eclipsed by ex-pat heavy Itaewon, which is much more upper class and trendy. Ansan is where many migrant workers live, of people from South and Southeast Asia and the African continent who work many industrial jobs. Seoul and its outskirts also has the biggest Mongolian population outside of Mongolia, and all these experiences intersect in this city. The “multicultural food street” is the beacon of these lived histories, and to me feels like one of the most invisibilized but vital heartbeats of Seoul and of South Korea. 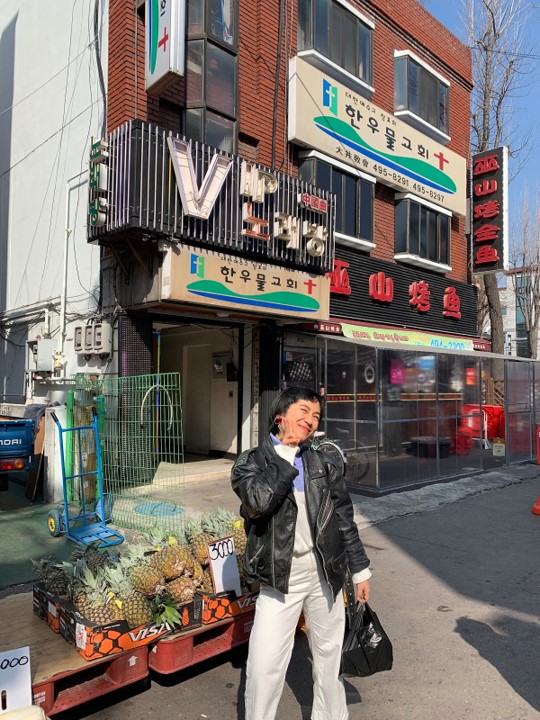 You can walk up and down the entire main strip and not even make a dent in learning about the people and the cultures there. There are countless vendors selling produce imported from tropical countries at a fraction of what they would sell in Lotte Mart. I was able to buy not only plump kumquats and blueberries, but also Manila mangoes and mangosteen. There are a slew of Chinese bakers selling delicious pancakes and street food snacks, tucked behind them traditional apothecaries that smell of menthol and eucalyptus. There are international calling card advertisements left and right, and halal groceries wedged between outdoor supply shops and home cleaning stores. If you veer off into the back alleys, you can find lots of food that you wouldn’t easily find in Itaewon, like Uzbek and Ukrainian, in addition to incredible Vietnamese and Nepali places. My friend and I decided to stop for lunch at an Indonesian place, and we were the only other people there aside from big groups of Indonesian folks, so we knew we were in the right place. We ordered Nasi Goreng to share and were glad we didn’t order more, because it was more than enough for two people. Afterwards, we wandered through the Indonesian grocery store attached to the place, and I bought staples that have been missing in my diet like coconut cream and mung beans for great prices. 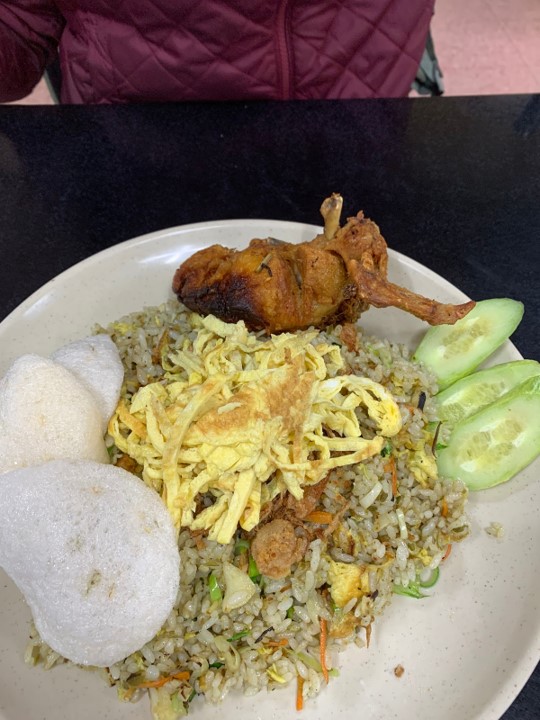 Afterwards, we returned towards the main road and found a bunch of vendors selling clothes on the street. Aside from Dongmyo, I get a majority of my best and most affordable shopping done in Ansan. There are people who sell men’s jackets on the side of the road for about 5,000-8,000KRW a piece. If you’re into baggier, more industrial pieces, this is the place. They even sell good camo and denim pants, and the person was sweet enough this time around to offer to escort me to a tailor where they would hem the sleeves of a jacket for 6,000KRW, and it would be done in 15 minutes. I was so touched by their overarching generosity for us. 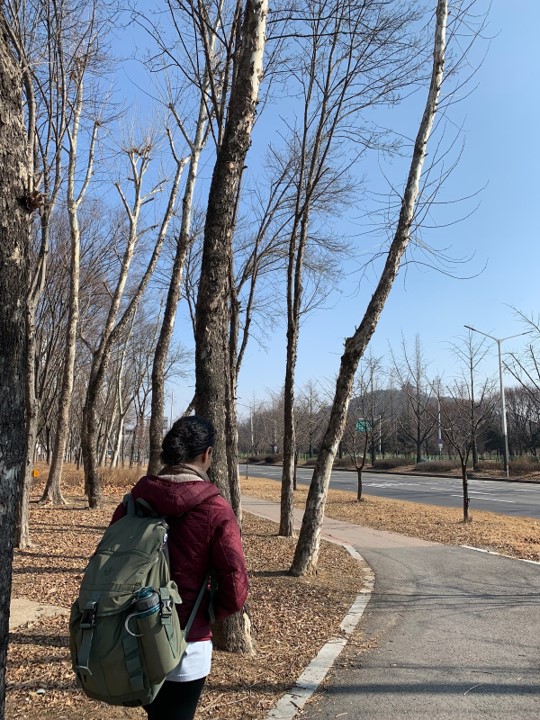 After our bout of eating and shopping, we continued on the main road to the Gyeonggi Museum of Modern Art. It’s pretty much a straight shot the whole way through, but it was so nice seeing neighborhoods that are much more peaceful and small, lined with a path of newly blooming trees. When we arrived, I was surprised by how vast and lush the park was that houses the museum. There are ample exercise gyms, playgrounds, and obviously a convenience store for snacks. What intrigued us most was the giant rock climbing wall, where you can take a  go at it for 2,000 KRW. We sat watching everyone climb for what seemed like hours. We ended up picnicking just outside the museum, because the view is also spectacular, with sculptures dotting the grass. Then afterwards, we walked to the Ansan Botanical Garden, which is a very welcome reprieve, with endless rows of flowers to usher us into spring. After hitting all these spots, we walked to the train and made our way home. As the city became more dense on the subway, it was reassuring to know that I can always come here for some healing, sun, and auntie-certified meals. 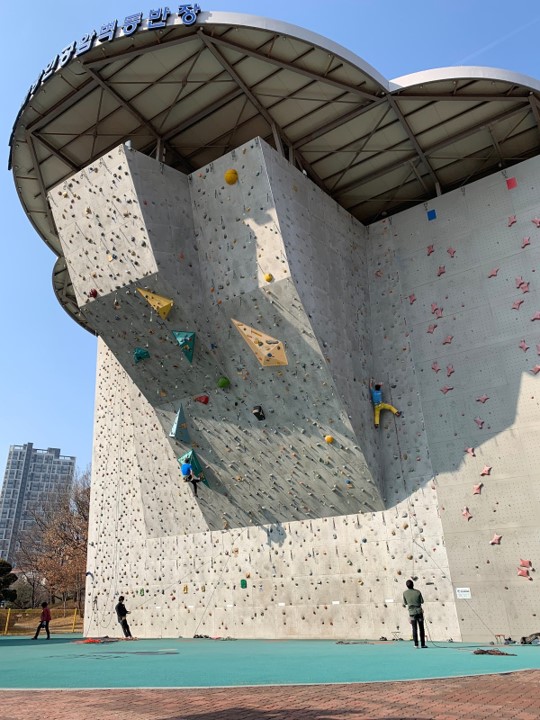 Tags: things to do on the weekends, places to see, Weekend activities in Korea, weekend travel, teaching at CDL, culture