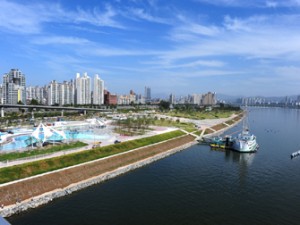 This area is located near the Common Ground Shopping Complex and Konkuk University (Green Subway Line #2). Ttukseom Resort (Olive Subway Line #7) is filled with many activities such as swimming pools, rock climbing, basketball courts and even windsurfing. Prices vary for each activity although the basketball courts are free of charge. Many fitness events come through this important area like marathons and muscle building championships. This place is great for youth, families, and people who love the outdoors.  The Ttukseom Resort location is among my favorite places to hang out in Seoul.

Living all the way out on the Eastern edges of Seoul, if my friends and I want to go for a long bike ride in the middle of the night, we head to Yeouido (Purple Subway Line #5; Brown Subway Line #9). Yeouido is actually an island and it is home to Seoul’s financial district. Many people know this area because of the famous Yeok-sam Building (63 Building), but this part of the river is great because of its lush greens and restaurants on boats. Many Saturdays throughout the warmer months of Seoul, Yeouido is home to one of the city's four Saturday night markets (Seoul Bamdokkaebi Night Market). Popular for artisans who want to buy one of a kind trinkets and foodies who love food trucks, Yeouido may just be the most popular place on the Han River. 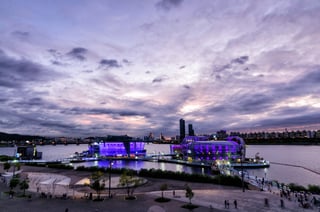 If you have ever seen Captain America: Civil War, America’s Next Top Model or the latest season of the Amazing Race, Banpo’s Some Sevit is the most colorful of all the locations here. Some Sevit is a series of three small man made islands that serves as cultural complex. LED lights cover the island making it a wonderful accompaniment to the world’s longest fountain bridge. The bridge is also filled with LED lights and fountain spouts that coordinate a dance and musical number at night. This area is also one of the longest parts of the Hangang River Park and is a great place for bicyclists as there are ramps to ride on. 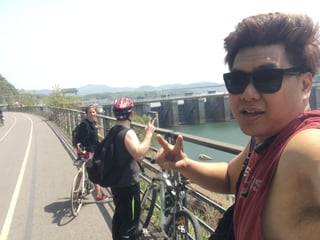 Close to one of Korea’s largest malls, Hanam Starfield, Paldang Dam just passes Seoul’s city limits. Many people who want to begin their trek outside of Seoul will start at Paldang Station and ride it all the way up to area of Chuncheon. I chose this place because there are wonderful cafes and restaurants to eat. One of my favorite restaurants is The Outdoor Kitchen Hangang which has camping and picnic style grilling and seating. Also, this area is famous for duck meat which is really delicious and the area is also very scenic as you can see the Han River begin to meet the mountains. 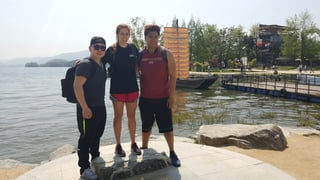 Ddumulmori (translated as two head river) is where the North and South Han River meet. This is the most nature filled place on my list. This is the area of Yangpyeong which is about a two hour bike ride from Seoul, however, you can get here by subway using the Jungang line. This area is famous for lotuses and you can visit the lotus garden or try different foods like lotus ice cream and lotus chips. The area is also famous for the Zeklova trees that are picturesque enough to be used in Korean dramas. You can also see a replica of an ancient Korean boat. Biking towards this area may be long, but it definitely is not that hard as Korea has designed the trail using flat lands.

One of my favorite things about Korea is the Han River. It is a great place to meet friends, go camp, and even have chicken delivered to your tent. As you can see, the Han River is very long so you can pick any of these places near and around Seoul and have a great time!