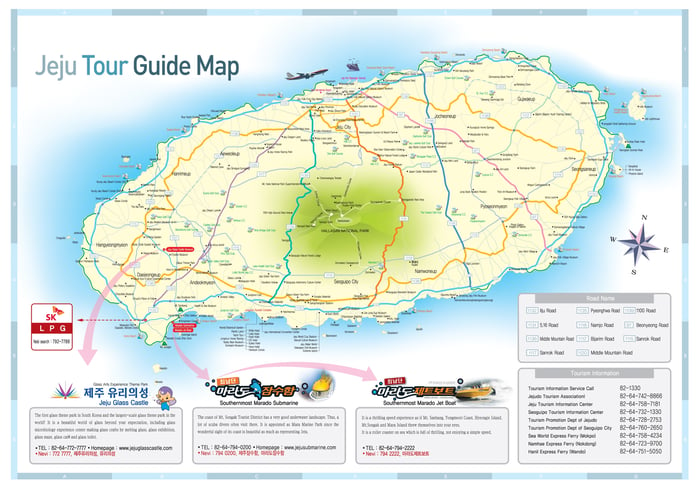 Jeju (Cheju) is Korea’s largest island and is the southernmost point of Korea.  Many people refer to this island as the "Hawaii of Korea." It's an easy place to get to while you are teaching in Korea because there are many flights from Incheon, Gimpo, and Busan Airports. When booking flights, Jeju Air and Air Busan are usually the cheapest airlines to use. The most convenient airport to travel from is Gimpo Airport, as it is only an hour away from Jeju. Also, if you do fly from Gimpo, there are many kiosks regarding what to do in Jeju so make sure you pick up some brochures and maps. For quick price checking in real time, try Skyscanner.com. This has been my go to website ever since I moved to Korea.

Jeju is great for a 3 day trip. When you arrive in Jeju you will land in Jeju City (in the northern part of the island), which is known for its high rises, business centers, and beaches. If you want to work on the island, we do have a ChungDahm Academy Jeju Branch in this area. The southern end of Jeju is Seogwipo. Seogwipo is known for its harbor, waterfalls, and seafood. The richer part of Jeju is called Jungnam Complex which is about a 15 minute taxi ride from central Seogwipo. Jungnam Complex is great area if you really want to relax resort style and have plenty of money to spend. I stayed at the BK Hotel near Seogwipo Harbor which was in between the two waterfalls I wanted to visit.

Below are my are top recommendations of activities and places to visit while in Jeju:

This ‘museum’ is not at all for children. As the title suggests, it is for a mature but adventurous audience. There are so many different statutes and exhibitions regarding ‘love’ that are ridiculously funny. What’s even more hilarious was when a group of older Korean women asked me to take their picture around a certain statue in the middle of the outdoor museum. I’ve never experienced a place like this in the U.S. so this was definitely worth checking out. 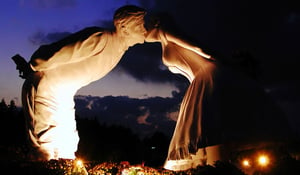 Jeju is famous for its volcanic rock sculptures around the island. Manjanggul Cave is the world’s largest known lava tube created by volcanic activity. Arriving there can be a bit difficult so it’s best to travel by taxi. Also since it is underground, make sure to bring a light jacket. Even in the middle of summer the inside of the cave can be 11-21 degrees Celsius. If you’ve never been to a UNESCO heritage site, this one is worth checking out. 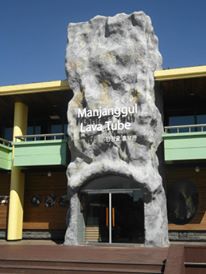 This is one of the most popular beaches in Jeju. Many tourists visit here because of the sand's therapeutic healing powers. People love to just dig themselves under the sand to see if this therapeutic power is legit. If this isn’t your thing, there are many other beaches that you can visit to relax. 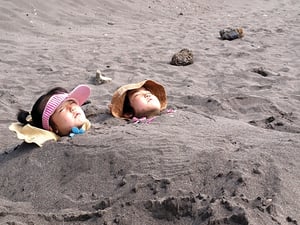 From Jeju City Bus Terminal, take the bus that heads towards Dongilju. When I went, I was at the tail-end of a hurricane so it was still raining quite hard. Even during the rain, there were so many tourist from around the world walking up its stairs. Seongsan Ilchulbong is another UNESCO Natural Heritage Site. UNESCO is part of the United Nations’ commitment to protecting sites that have historical, cultural, or scientific importance. This crater was created over 100,000 years ago from an underwater volcanic eruption. This was the main reason why I wanted to visit Jeju the second time around and the scene from the top did not disappoint. When walking down the crater, try to catch one of the Korean mermaid shows where elderly Korean women have been fishing for their meals for hundreds of years. This has been a dying art so try to catch the show while you can. Udo Island is also nearby, so if you have a few hours, you can jump on a quick 10-15 minute ferry island to what locals call ‘Cow Island’. 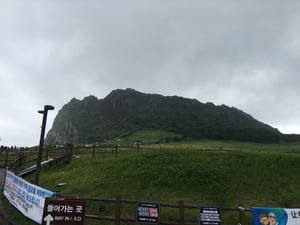 This area is famous for its three waterfalls. The first one is Cheonjeyeon Falls near Jungmun Complex. If you want to see impressive feats of nature, Cheonjeyeon Falls is a 3-tier waterfall. The other two waterfalls are walking distance from each other. Cheonjiyeon Falls is full of different flora and fauna so it makes it seem like you are walking through Disney’s The Jungle Book. The other is Jeongbang Falls about 2 kilometers away and it is the only waterfall in Asia that falls directly into the ocean. 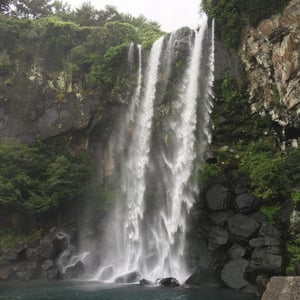 Located next to Cheonjiyeon Falls, it is a great place to unwind. Here I was able to meet other expats and Koreans who were just starting their night off. It is kind of like a convenience store where you can just grab beers from the fridge, but they also offer traditional Korean snacks and ramyeon to accompany your alcohol. There is plenty of seating both indoors and outside as it overlooks Seogwipo Harbor.

Jungman Resort Complex is full of high end resorts, beaches, and casinos. There are also a lot of  interesting museums like Ripley’s Believe It or Not, Teddy Bear Museum, ChocolateLand, and Play K-Pop Museum. From Jeju City to Jungnam Resort Complex and Seogwipo it takes about 1 hour using Airport Bus No. 600. 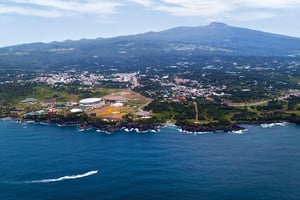 If you want to do the fun touristy stuff, three days in Jeju is more than enough. There is plenty to do there to keep you entertained (especially if you climb Hallasan, Korea’s tallest mountain). Even though I did everything I wanted to do, I would still go and do it all again. Jeju is a fantastic place if you want to get out of one of the big cities and enjoy nature.