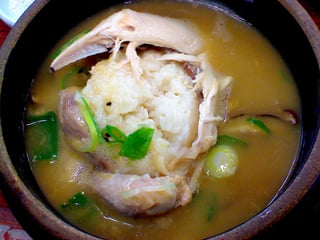 1. Samgyetang (삼계탕) – For many people, it would seem counterproductive to eat hot soup during the middle of summer. But Koreans have this idea down. Samgyetang is ginseng-chicken soup which is stuffed with rice and jujubes. I didn’t know what a jujube was, but I quickly learned that they are red dates usually added to increase the flavor of the soup. This is definitely a hearty meal and worth trying when living in Korea. Located in central Seoul, Tosokchon Samgyetang Restaurant is one of the most famous restaurants that serve this kind of soup. Located near the President’s House, past presidents would go and take their enclave for this delicious soup. Make sure to get there early because the lines can be ridiculously long. 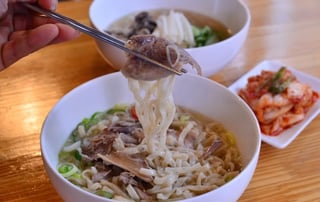 2. Chogye-guksu (초계국수)– Instead of having a warm soup like samgyetang, you may want to opt for this soup. Chogye-guksu means vinegar chicken. At times, it is made of shredded chicken, medicinal herbs, noodles, and a variety of vegetables. This dish originally was popular in North Korea, but those of us here in the South can enjoy it too. If you want more of a spicy kick, make sure to add more vinegar and hot mustard. That should do the trick! Located on the outskirts of Seoul, 밀빛초계국수 near Paldang Dam, many bikers and visitors of this area make sure to stop at this famous location.

3. Naegmyeon (냉면) – Naegmyeon is another cold dish that can be found in many Korean restaurant chains like Kimbap Heaven or Noodle Tree. This too is made of noodles with broth mixed with crushed ice. At first, I couldn’t understand the concept of crushed ice in soup, but now I can really enjoy this during the summer time. The soup also contains mixed vegetables and a hard-boiled egg. For you to make it a bit spicy, feel free to add some vinegar and extra gochujang sauce. This dish is quite affordable and normally costs less than 7000 won. 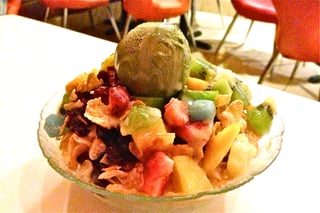 4. Patbingsu (팥빙수) – It wouldn’t be summer without some traditional Korean dessert! This is one of Korea’s favorites called patbingsu. The traditional form of this is made of ice shavings, red bean paste, condensed milk and some type of fruit but nowadays, there is a new Korean wave of different types of patbingsu like mango-coconut, honeydew melon, and chocolate cheesecake. Many small dessert cafes are opening up in Korea, but the famous chain Sulbing (설빙 Dessert Café)설빙 Dessert Café) is bringing it into its limelight. Make sure to bring some friends and share these delicious desserts.

In the event that there is no more food that you can handle, I suggest that you try these 2 drinks to cool you down during this humid weather. 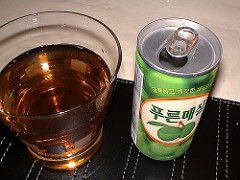 1. Mae-Shil (매실) – Mae-shil is plum juice that is used to finish off a royal traditional Korean meal. This is perfect for summertime. I could drink 4-5 of these drinks in one sitting; it is that good! The juice is sweet and tangy. You can also find Mae-shil alcohol if you need a drink after a long day of work.

2. Flavored soju – Since the beginning of last year, flavored soju has been one of the hot trends in Korea. Korean companies thought by adding flavored soju to their marketing mix, more women would start drinking it too. It’s not only women that drink it but increasingly men are doing it too. Starting with citrus flavored soju, different varieties have been added including blueberry, pomegranate, pineapple, grapefruit, and my favorite – apple. Be careful drinking too much of these flavored soju though. It is packed with sugar and can leave you with a nasty hangover in the morning.

Hopefully, this blog has made you hungry. So if you want to live like a Korean, these 4 dishes are amongst the most popular to try while you are here. Don’t forget to try these drinks too!