Make Sure To Visit Beautiful Hwaseong Fortress While Teaching in Korea

There are a number of wonderful, cultural, and historical places to visit in Korea. Having already written about Namsan Tower, I would like to tell you about another one of my favorite places that I have enjoyed visiting during my time teaching in Korea.  This place is Hwaseong Fortress. Having been to Hwaseong Fortress on four separate occasions, I felt inspired to write a blog to let readers know about one the most beautiful places to visit within the Seoul area limits. If you’re ready for a hike, and to see something of historical and cultural significance to Koreans, Hwaseong is the place to go.

Hwaseong Fortress is located an hour south of central Seoul, in Suwon. Suwon is on the dark blue line, and is a highly populated city. There are a number of foreigners in this area as it is near the headquarters for Samsung. Having lived in Yeongtong for a year, while working for Chungdahm, I have been to this area quite a bit. The two biggest attractions for this area, are the large AK Plaza mall, located above the subway station, and the Hwaseong Fortress. 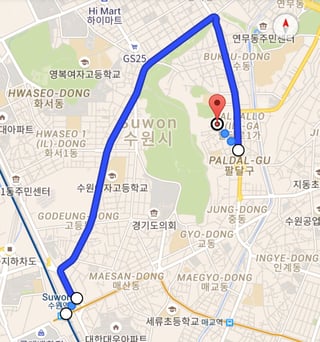 To get to Hwaseong Fortress, it can be a bit of a walk from the subway station. Because of the amount of walking you will want to do at the fortress, I would encourage taking a bus to the fortress. To take a bus, go to the bus station across the street from the mall, within in the half circle, and then hop on bus number 66. It’s not too long of a bus ride, and you can’t really miss the fortress as it is very large. But, when in doubt, use google maps! It takes around 23 minutes by bus. Once again, while it is possible to walk to the fortress, it is a long way, and it is a bit difficult to navigate.

Hwaseong Fortress was built from 1794 to 1796 during the Joseon Dynasty period and is roughly 3.5 miles (5.5 km) in length. It is riddled with strategic military defenses and posts from which Korea’s enemies could be spotted if there were ever an attack during that period. There are all sorts of holes in the walls, allowing for guns, arrows, or spears to be used. The Fortress is also considered incredibly culturally valuable because it shows the early sophistication of Korea, as it was built using the most advanced technology of that time. The Fortress has had numerous repairs over the past thirty years, primarily due to damage caused from the Korean war. Suwon was reportedly a place of heavy fighting during that time, and the city had changed hands four times. 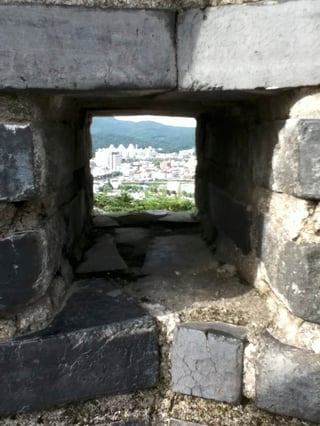 The best part of Hwaseong Fortress is the view from the top. It is absolutely stunning to see Suwon from so high up! Outside of the fortress, you can’t really see how tall it is, but it is breathtakingly beautiful to be able to see nearly all of Suwon at once. It is also a great spot for a picnic.

While you are at the top, definitely take pictures of the Pavilion, and Paldalmun Dongjong, a large bell. The bell is not too far from the Pavilion at the top. If you pay 1000-2000 won you can actually ring the bell, which may seem silly to pay money to do, but it is totally worth it. There is a large wooden beam, that you pull away from the bell, and simply let go. Very fun, and the sound is actually very peaceful.

Walking around the whole fortress could easily take an entire day to do. There are also a lot of buildings inside of the fortress to see as well.  I hope that you get to enjoy the Hwaseong Fortress as it makes for a great way to have an active day, all while being able to learn about some Korean history.

Tags: Activities to do in Korea, Weekend activities in Korea, korea history