Wine and Dine at the Daejeon International Food and Wine Festival

One of the best ways to fully experience the Korean culture is by attending the numerous festivals that are held throughout the country. The Daejeon International Food and Wine Festival has been a must-attend festival during my three years teaching in Korea. If you love food and wine, then this festival is a cost-effective way to indulge in both! 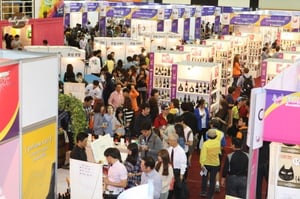 Daejeon is located roughly in the center of Korea, making it accessible from all parts of the country. As one of Korea's largest cities, Daejeon offers something for everyone from hiking to shopping to strolling in one of the city's many parks. One reason I love living in Daejeon is the numerous festivals held throughout the year, including the Gyejoksan Barefoot Festival, the Ppuri Culture Festival, the Geum River Lohas Festival and the International Food and Wine Festival.

The Daejeon International Food and Wine Festival is held at Expo Park, next to the Gapcheon River and the beautiful (and creatively named) Expo Bridge. The festivities are divided predominantly in two main sections:  the inside tent focuses on wine while the outside booths focus on food. 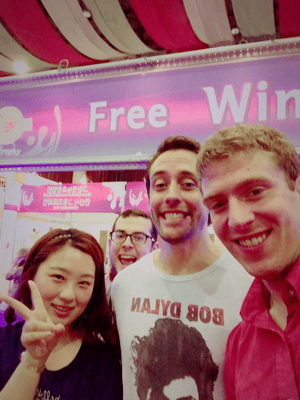 The cost of attending the festival is ten dollars. An admission ticket includes a wine glass and unlimited access to all the wine-related delights inside the tent.  Upon entering the tent you will notice tables covered in hundreds of bottles of wine. Most wine comes from outside of Korea, especially Western Europe, but if you are feeling adventurous there are a few traditional Korean liquors to try as well. The ginseng wine in particular is a rather interesting choice, but I only recommend it if your stomach can handle a curveball! Cheese and cracker booths are interspersed with the wine tables to ensure you don’t drink on an empty stomach. First-time attendees beware; every thirty minutes the wine vendors gather a crowd around them and unleash a shower of sparkling wine. If you value your clothing, I suggest you avoid falling for this trap.

The food offerings outside the tent range from Chinese and Japanese to Pakistani and Vietnamese. My friends and I settled for a simple dish of various fried chicken dishes, but if you want to get a bit more adventurous, they have booths offering many different Asian cuisines. The vendors come from restaurants all across Daejeon, and it is a great way to experience the diversity of food within the city. The pad thai was quite excellent, and I personally am always a sucker for a good ol' Korean seafood pancake (pajeon).  The festival also has many musical acts which are awesome to watch while you are nibbling on your food and sipping on a glass of vino. They are generally amateur performances by locals, oftem kids or maybe aspiring K-pop idol groups, but they are entertaining nonetheless.

The perfect end to the festivities comes after the sun goes down, and the Daejeon sky lights up with a spectacular fireworks display.  Overall, the Daejeon Food and Wine Festival lived up to its expectations yet again. It is a great way to spend a day with friends, all while trying copious amounts of wine and delicious food. If you come to Daejeon in early September, you have no choice but to check it out!

Patrick Sheridan grew up in a quiet suburb of Boston but always knew he wanted to explore the world. Studying abroad in Denmark while attending Elon University did not completely quench this desire, so after graduating in 2012 he decided to join Chungdahm Learning and teach English in South Korea. He loves wandering through the various neighborhoods of his city Daejeon, sampling random back-alley restaurants and attempting to communicate with the locals in his horribly broken Korean. He embraces everything Korean and looks forward to seeing everything South Korea has to offer.