I've recently decided that I am on a mission to explore all the odd and quirky cafes that Korea has to offer. (Luckily, there are lots and lots of them.) Since the weather isn't terribly out-of-doors-friendly right now, it seems like a good time to start checking them off my list. Right at the top of that list for my friends and I was a board game cafe, which we easily found in the Gangnam area of Seoul. 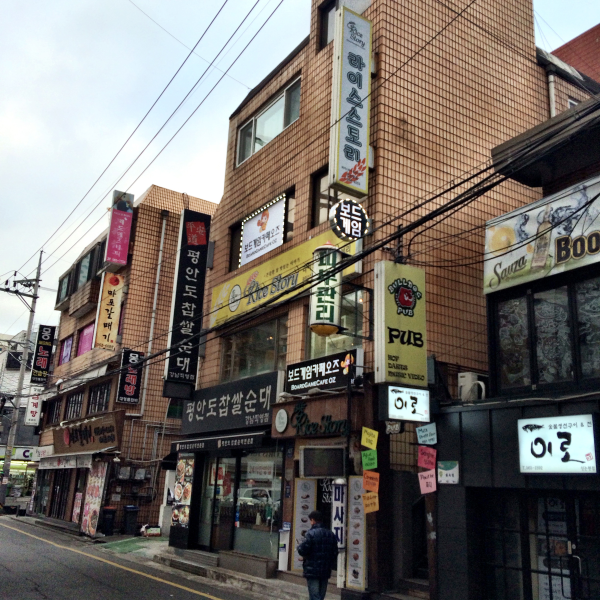 Board Game Cafe Oz, on the third floor, above Rice Story.

It was a bit of a trek through the neighborhood to find Cafe Oz (see the end of the post for directions!), but we were immediately impressed -- they have a huge selection of games, many of which are in English. As we sat down in the cafe, we were presented with a giant binder that was essentially a menu of possible games.

Flipping through, we noticed that each game had a description, some basic information about the number of players, and an estimate of the time needed to play. Most of this info was in Korean, but we were still able to easily spot the games that were in English.

Sooo many games that I have never heard of.

After settling on a game, we also ordered drinks. While the game cafe is quite affordable, you get a discount on the hourly rate if you also order a drink. The drink menu was the standard cafe fare, and though slightly pricey, it all evens out with the discount on the game rental.

Empty and quiet when we first got there...

...But the quiet didn't last very long once this huge group came in.

The cafe is a decent size and able to accomodate large groups of people. It was fairly low key when we first arrived, with only a few other occupied tables. About halfway through our game, a group of about 20+ college aged kids came in, and they were going crazy playing games. Being loud and noisy, as many of us are wont to do while playing a competitive game, seems to be completely okay in these cafes -- the tables of college kids all had giant plastic hammers and kept hitting each other over the head when a mistake was made in the game they were playing. If anything, our more reserved game play was actually unusual compared to those around us. 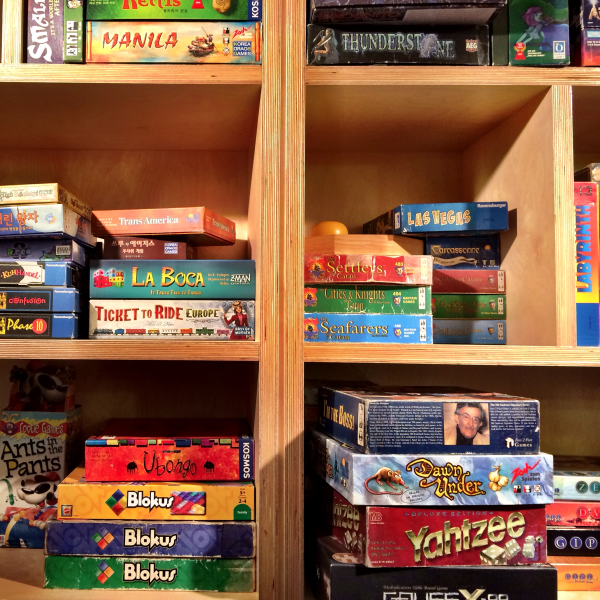 Just a small section of the shelves filled with games.

We played for an hour or so, and when it was time to leave, I was happy to see that the total for each of us was somewhere between 7,000-9,000 won. After the cost of the drink, it was only a couple more bucks for the game play. The hourly rate was 3,000 won per hour, with a discounted rate for each hour after that. When split between a group, it ends up being really cheap!

For more information about the board game cafe, such as a map of how to get there, here's their business card!

The red building is the cafe!

I recommend spending an afternoon in Cafe Oz, whether you're looking for an indoors activity to escape the last of winter or if you just need a break from shopping your way around Gangnam. If you go, definitely check out some of the weirder games -- I'm curious to go back and try to figure some of them out myself!