Just a short jaunt from my favorite area of Seoul, Insadong, is a neighborhood that's vying for the number two spot. Nestled between two palaces and overlooking hip Samcheongdong is the Bukchon Hanok Village -- narrow winding streets flanked with gorgeous hanok houses. I've taken a stroll through this neighborhood several times now and it just never gets old. Not only is this area ridiculously photogenic, but it also offers a variety of cultural activities and history lessons! 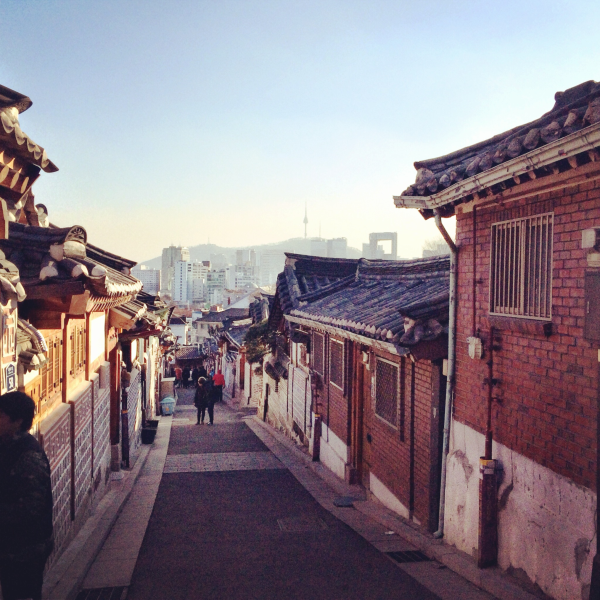 Here's the basic history of the area: During the Joseon Dynasty, when the surrounding palaces, Gyeongbokgung and Changdeokgung, were actually inhabited, the Bukchon area served as the residential quarters for the upper class, such as nobility and high-ranking government officials. Urbanization, naturally, harmed these neighborhoods, as did the years of Japanese occupation and subsequent war.

In the years after the Korean war, Seoul's rapid modernization lead to the demolition of even more hanok houses. It wasn't until the 2000s that the Seoul Metropolitan Government created new policies to beautify and preserve what was left of the hanok houses. 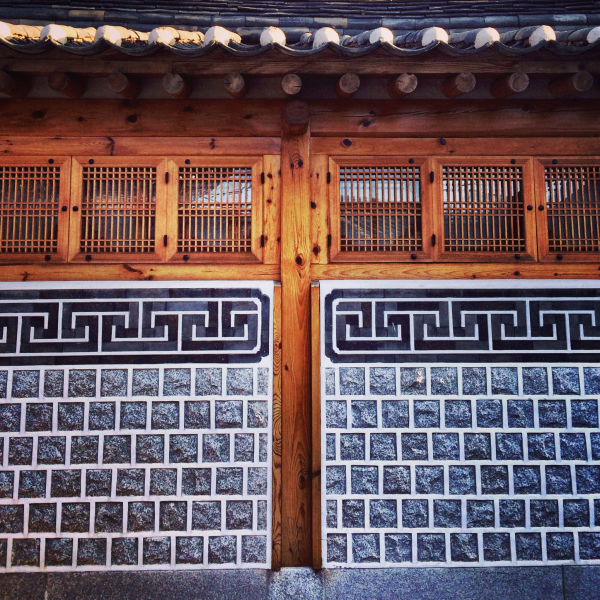 The hanok houses themselves are works of art. The slope of the rooftops is just aesthetically pleasing, and all the intricate patterns on the walls, windows, and doors will keep any photo-happy tourist busy for hours.

In addition to being a touristy, gorgeous neighborhood, it's actually still just that -- a neighborhood. As you walk around, you'll see signs about the neighborhood's curfew as well as a reminder to respect the privacy of the residents. 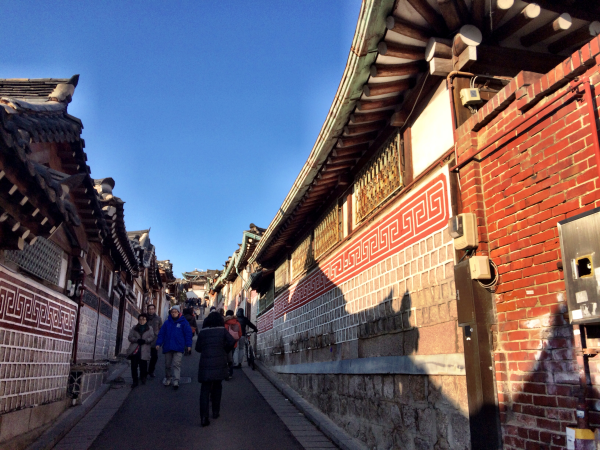 If you're hoping to get a glimpse inside the hanok houses, don't worry. They aren't all residential. In fact, many have been turned into mini-museums, showcasing artifacts and "intangible" cultural heritage.

My first visit to Bukchon, I was completely unaware that these types of activities existed. Arriving shortly before closing time 5pm, we realized we were missing out on a ton of cultural workshops. I then vowed to go back and try to start exploring what the different hanok houses had to offer. 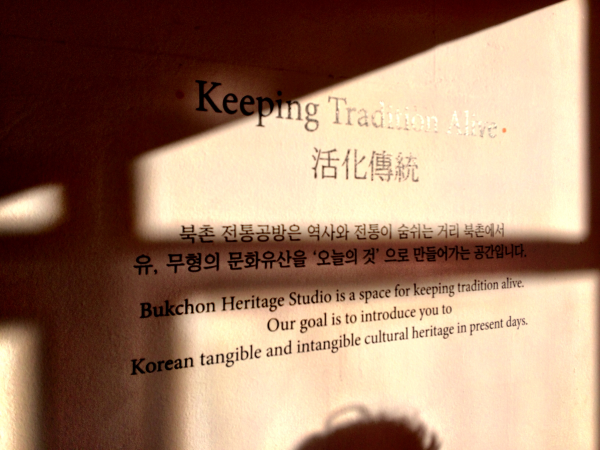 Just look for signs like this outside some of the hanok houses -- it means there's something cool inside!

When I was in Bukchon most recently, we wandered into a hanok house that had a sign outside advertising different kinds of alcohol. When we walked in, we were immediately greeted by an older gentleman who worked there and spoke excellent English. He told us about the history of the neighborhood, the house we were in, and led us through the different gallery rooms with display cases full of beautiful folk crafts. 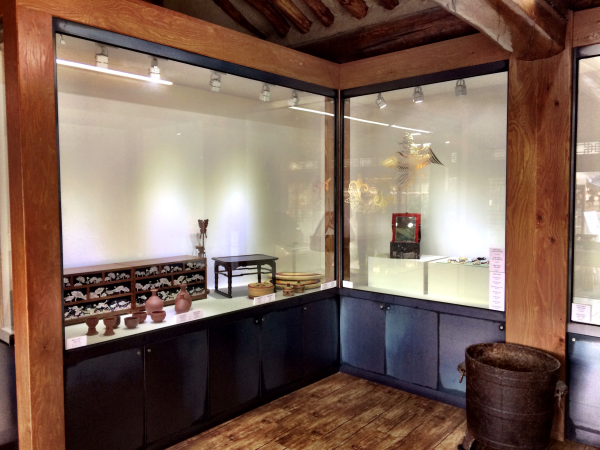 After we looked all around, our host told us about what this particular hanok house offered: soju tasting. We all grimaced, as it was around noon, but he assured us that it was just tiny samples. 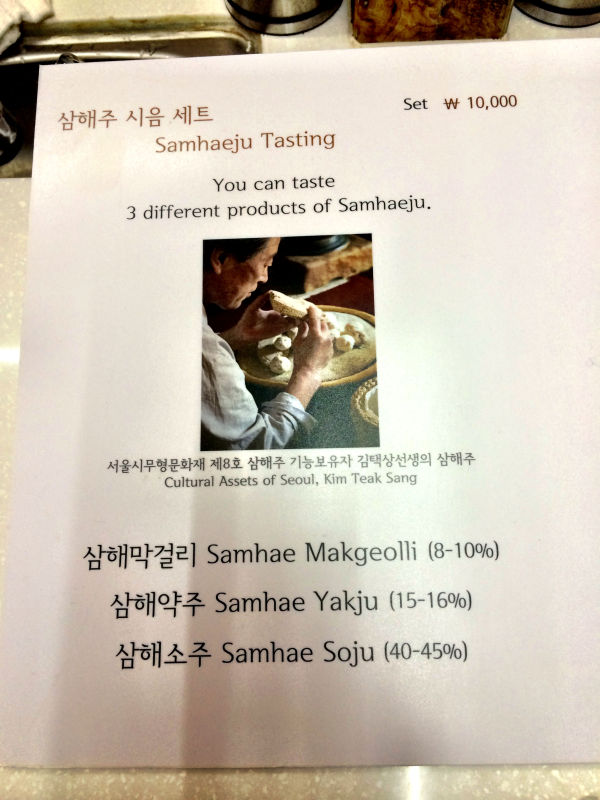 Only three of our party decided to do the alcohol tasting, and the price listed above provided enough for us to split it. 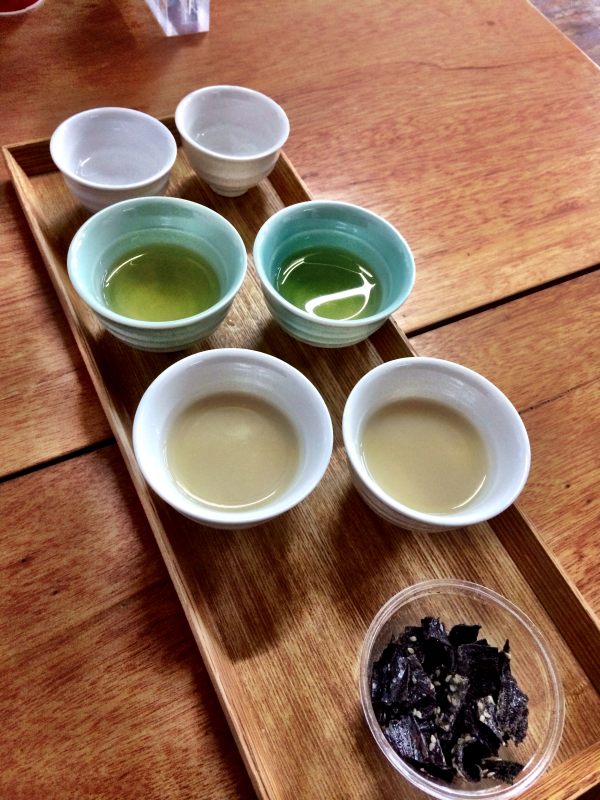 From top to bottom: the (very strong) soju, the yakju, and the makgeolli. The makgeolli and yakju were my favorites!

After sampling the drinks, we made more conversation with our host and were brought free samples of moju, which I had never had before. It's a "folk" liquor that's made from boiling down makgeolli and mixing it with medicinal herbs. It was sweet and warm and delicious -- also with a very low alcohol content. Our host told us that it's thought of as a drink served by Korean moms since it's full of herbs and spices!

We didn't have time to check out any of the other hanok houses on this particular visit, which I suppose just means I'll have to be making another weekend trip over there sometime soon. No complaints here -- I saw signs on other hanok houses for embroidery and pottery museums, which might even include some kind of workshop! 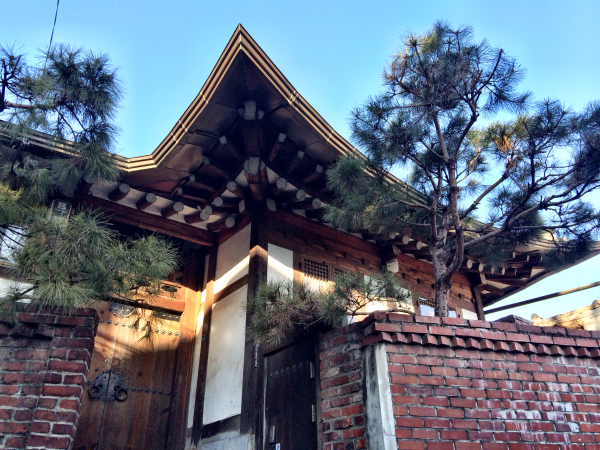 For more information about the attractions of Bukchon, check out this excellent website by the Seoul Metropolitan Government. You can read more about the history as well as getting a preview of the museums, cultural workshop experiences, and a map for a walking tour. As you walk around, keep an eye out for information guides -- they'll have red aprons and are always happy to hand you a map and suggest the best route.

Walk straight for about 300m, keeping an eye out for signs/Tourist Information Center.

I highly recommend spending an afternoon (or four) in the Bukchon Hanok Village. Between the photo opportunities and all the activities, it's definitely a neat, culturally infused way to learn more about Korea's past.

Have you been to the Bukchon Hanok Village or any other hanok villages in Korea? Leave a comment below to share your experiences or thoughts!