When I came to South Korea to teach English for a year, I was really excited. Not only for the food or the culture or the amazing hiking, but also for the theme parks. South Korea has some of Asia's best theme parks, from Lotte world in Seoul to E-world in Daegu, where I live. Little did I realize, however, just how close my apartment and job would be to one of those Theme Parks. E-world is a Theme Park in Daegu, Korea's third largest city. It is open all year round and depending on seasons it is half water park, ski park and theme park. Not only that, but at night it transforms into a light show, with every tree, every statue, every building covered in illuminations. The other English Teachers and I decided to visit E-world last Sunday:

(E-World & Daegu Tower, all lit up at night)

We had an amazing time that day. We left for E-world at 11am and we didn't leave until 8pm. Thanks to my BC Discount Card, it was only $12 for the day. What's also pretty cool is that the entry fee also included a visit up to the top of Daegu tower. The views of the sunset in the evening were amazing. 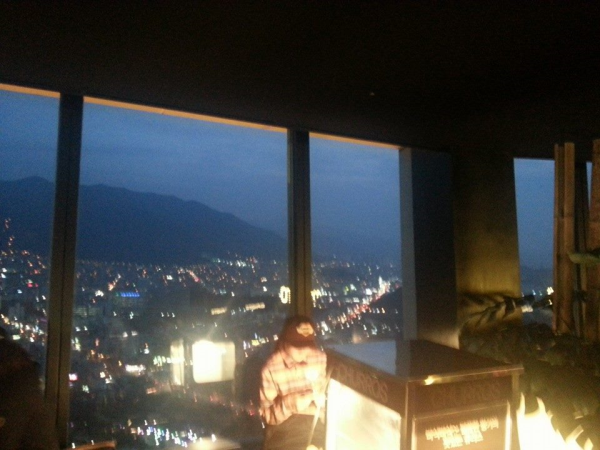 (The view from atop of Daegu Tower)

It was a great trip, and I recommend it!

John May grew up in Dublin, Ireland where he is from & went to Trinity College – one of Irelands best known universities. He graduated from here in November 2012 with a B.A. (Mod) in Geography & Sociology. John has always had a passion for travelling having been to most of Europe, he decided to explore Asia after Uni. He had always wanted to teach and thought whatbetter way to travel than teaching English on the way. John is currently teaching English for CDI in Daegu, South Korea a position he found through Aclipse; and loves every minute of it!