With the start of the spring term, my Chungdahm branch moved locations, opening up in a brand new building in the fancy area of Songdo, Incheon. Only a fifteen minute bus ride away from the area I live in, Songdo claims to be the up-and-coming area for international business in Korea, hoping to take over as the new "it" area. 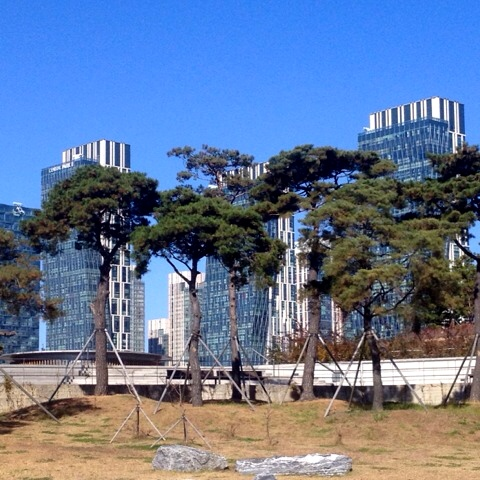 Before beginning to work in Songdo, I'd only been there a handful of times. My neighborhood has always kept me plenty busy, so I just haven't gone out to explore Songdo. Now that I'm there nearly every day of the week, I'm realizing that I should've spent more time in this area of my city.

Built on 1,500 acres of reclaimed land beginning in 1994, the Songdo International Business District opened on August 7, 2009 and claims to be the "first new sustainable city in the world designed to be an international business district." Songdo is also part of the Incheon Free Economic Zone, which means businesses receive special incentives like tax reductions. The development set to span ten years, focusing on infrastructure, project development, and then project completion. 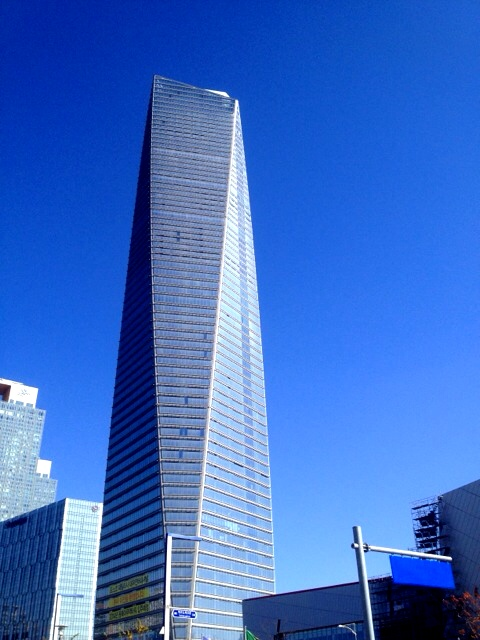 The Northeast Asia Trade Tower, which is Korea's tallest building.

In addition to all the fancy businesses and international appeal, Songdo is also visually quite cool. Fancy architecture seems to be something that was specifically taken into account as Songdo was being planned and built. They have also tried to incorporate landmarks and features that pay homage to other famous cities. In the middle of Songdo is a 100-acre New York-like Central Park with Venice-inspired canals. Walking around, you can spot various little references to other landmarks, like this miniature Louvre glass pyramid: 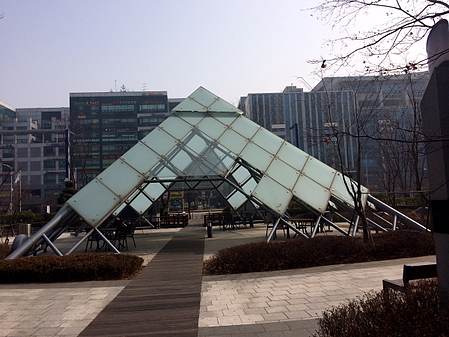 Looking at these pictures of Songdo makes me really excited to explore as the weather warms up. This blog entry is just a first look at the area -- there's so much more to check out! Central Park in particular is an area that I want to get to know well. My students, who largely live in the Songdo area, have told me there's an island with rabbits?! Little pedal-boats are available to rent for the canal, so as soon as the nip is gone from the air, I'm going to spend a weekend afternoon soaking up the sun and exploring this huge park. 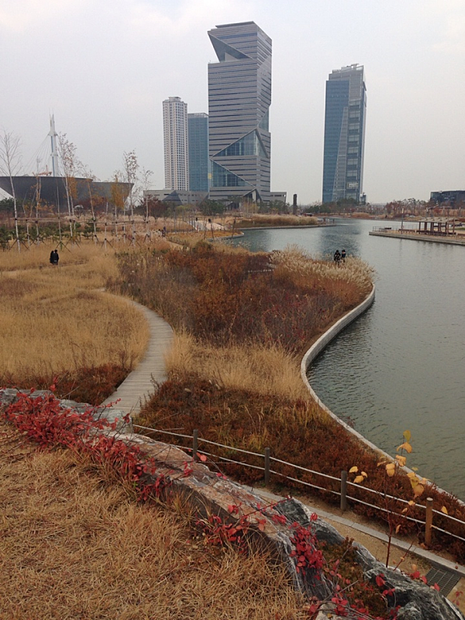 Really looking forward to seeing this green and lush.

Even the sidewalks are fancy! Landscaping details like this are everywhere in Songdo.

The little bit of exploring I've done so far has yielded excellent results. For example, there's a Thai restaurant that we have tried that was basically life changing, as well as a more recent discovery of a Mexican spot that's legit. (And I have high standards for my Mexican food.) Spots like those are a huge draw for making your way out here to Incheon. The whole area seems to be so internationally diverse that I'm always on the lookout for another shop or restaurant to check out.

After being in Korea so long, it's refreshing to have a brand new area to explore, especially when it's right next door to where I live. In general, Incheon tends to be overlooked. The airport is here, but other than that, it seems to stay in the shadow of Seoul. However, there's so much to do here, with Songdo being the newest draw. And the best part about Songdo is that it's constantly changing and developing! There will be definitely more to come about this new hot spot, so stay tuned! When you're in Korea, definitely keep Incheon, and Songdo, in mind as tourist destinations!

Tags: a year in Korea, Korea, life in Korea, incheon, what to see, songdo, neighborhood