Next to Dongdaemun Gate is an area of Seoul famous for its countless markets, ranging from clothing to textiles to craft supplies. Now, in the middle of these more traditional markets and hip shopping malls, a structure that looks like something out of a futuristic landscape has finally been unveiled. This spaceship-like building is the new Dongdaemun Design Plaza, and not only is it really, really cool, but possibly one of my new favorite spots to visit in Seoul. 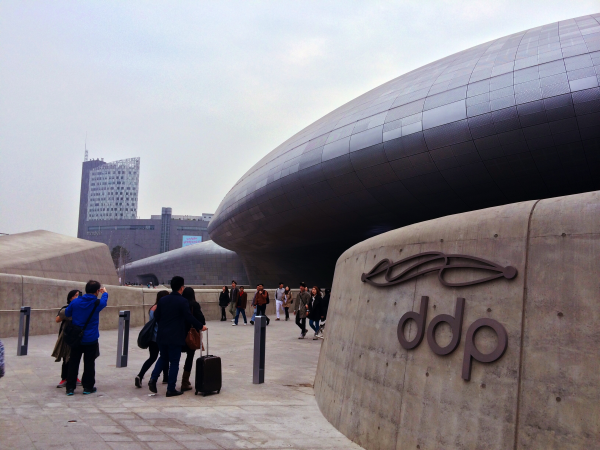 The Dongdaemun Design Plaza, or DDP, opened its doors on March 21st of this year after being under construction for years. According to the Seoul Design Foundation's website, the DDP is "the biggest three-dimensional atypical building in the world." Just looking at it from the outside is a trip -- all the curves and silvery panels are so aesthetically pleasing. I'd noticed it being built during previous trips into Dongdaemun, wondering what on earth the giant alien structure was going to be, so I was quite eager to finally take a look around.

The idea behind the DDP is that it will be a center for everything creative in the design community, ideally becoming a hub for artists. Not only is it set up to feature exhibits from artists all over the world in its museum and exhibition halls, but it's full of little spots for artists to sell their products. We were a little overwhelmed by the structure and didn't know where to start exactly with exploring the inside, so we just picked a door at random. Technically, it's kind of three buildings, which have been connected into one giant, curvy structure. Here's the guide we found that was immensely helpful: 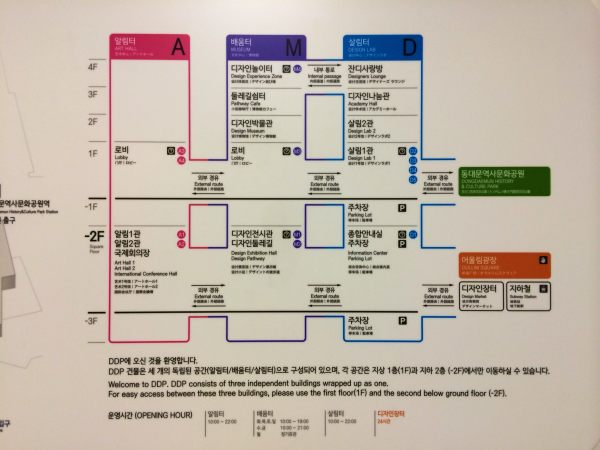 Keep an eye out for these on the walls by all the doors!

The DDP is divided into different sections and zones that cover six floors. To help explain some of what we saw, I'll use the following pictures and their captions:

This is a photo from the Design Market, which features various retail shops, many of which are chains that you'll see elsewhere in Korea, and a decent selection of restaurants in a food court. This area in particular is open 24 hours a day! Which is pretty perfect if you happen to be in the area to see Dongdaemun's night markets. 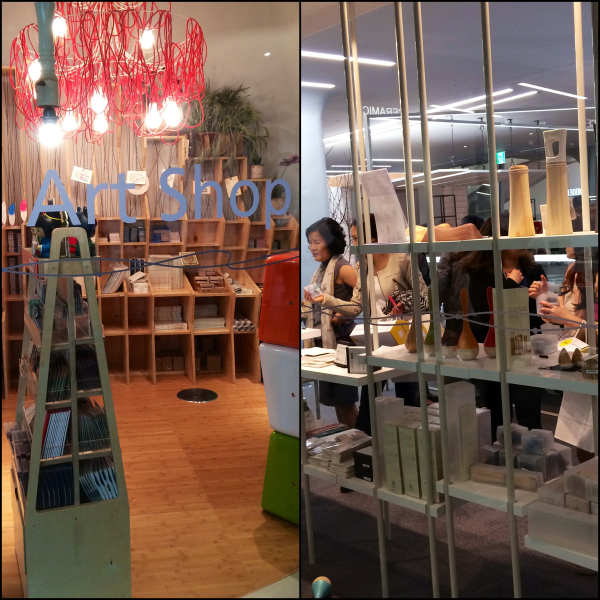 A couple shops in the Design Lab section. This was my favorite -- so many cool little stores selling products featuring up and coming designers. I feel like this would be a really, really good gift shopping spot. A lot of stationery items, gorgeous art prints, and other decorative items. 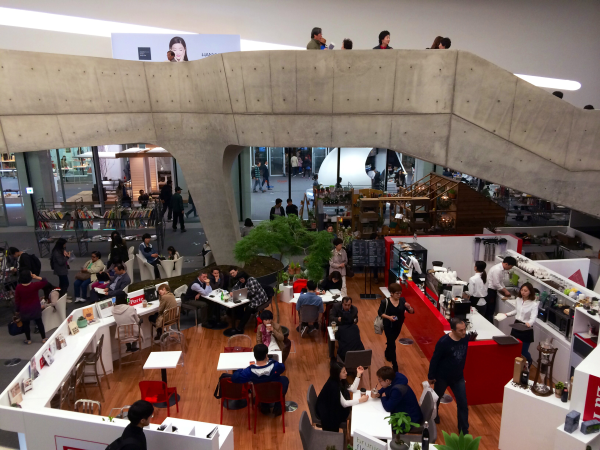 Aerial shot of a different part of the Design Lab. 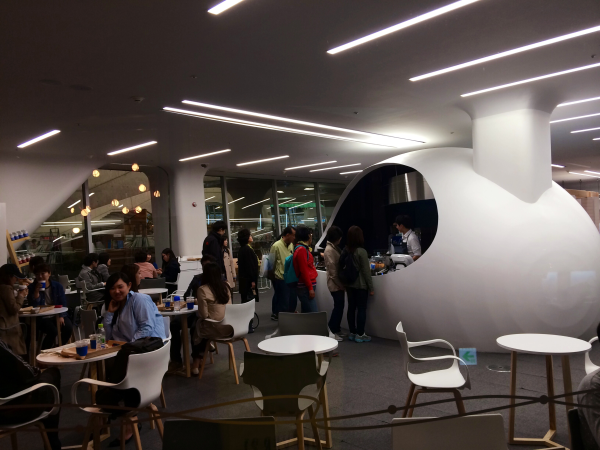 Even the coffee shop looks all space age! The information desks scattered throughout the building also have bizarre designs, but this little pod cafe was my favorite. 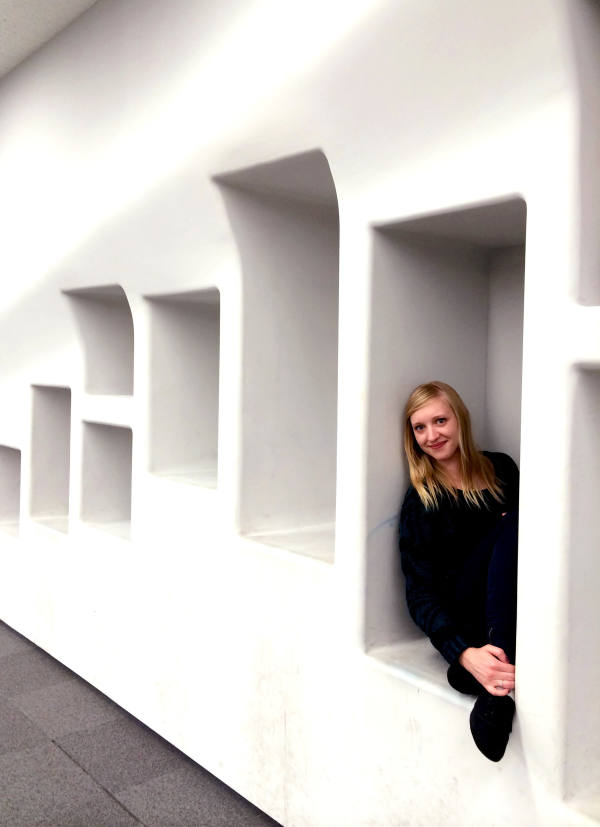 We found little cubby holes! Perfect for children, and us, because we couldn't resist. Nearly everyone was stopping to take photos sitting in these little holes. 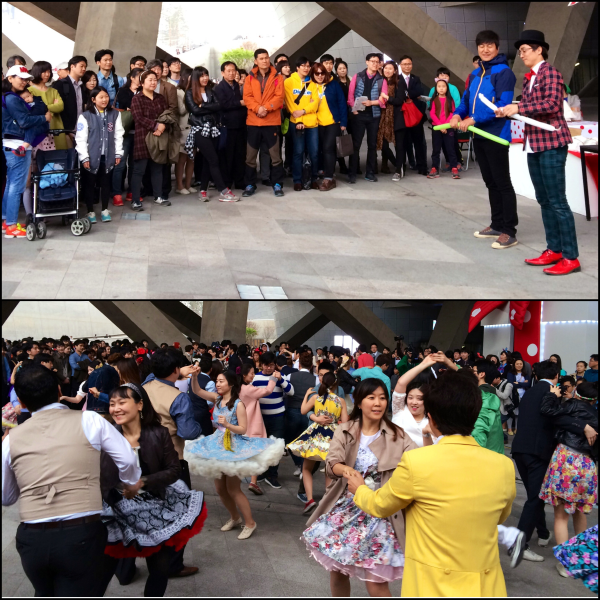 Outside (and under?) the building is a large park area, called Oullim Square. While we were walking around, we caught sight of a suspicious number of girls in poofy-skirted dresses. Wondering if we might catch a flashmob, we stuck around, only to see not only an impromptu dance performance but also a magic show!

From its stunning architecture to everything it offers inside, you could easily spend hours upon hours wandering around. In fact, despite the hours we spent there, we didn't see everything! I'm looking forward to going back soon to explore it more and see the building at night. As impressive as it looks during the day, in the evenings the panels light up, making it look even more like a spaceship from another world.

So, after a day of wandering around the markets, or if you're looking to kill time before going to the late night markets, definitely make a stop by the Dongdaemun Design Plaza. Great shopping, random performances, lots of restaurants, and countless photo ops! What more could you want? 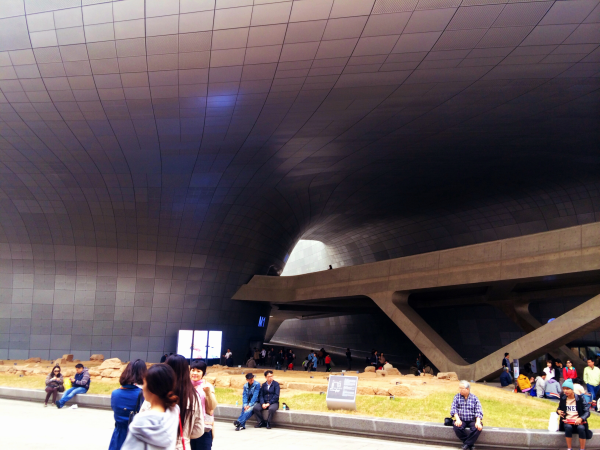