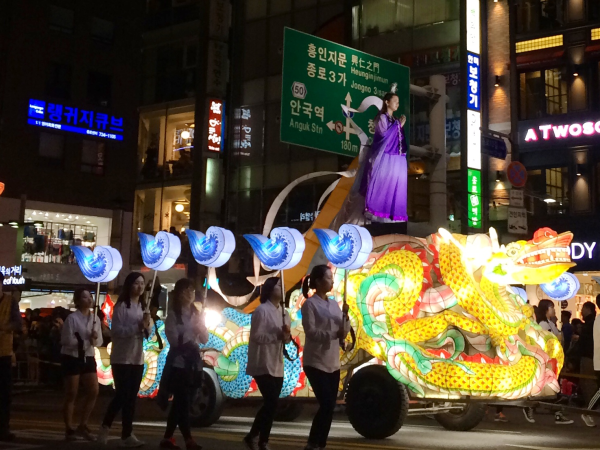 The parade's route runs from Dongdaemun Gate and ends at Jogyesa, so prime viewing spots are along Jongno street. I've been to this parade before and I highly recommend getting there at least an hour early.

Pro tip: They set up plastic lawn chairs along the street for the parade, and the earlier you get there, the easier it'll be to get a good spot. We staked out our spots a little after 5pm (the parade began at 7pm) and then took shifts wandering away to check out everything else in the area, such as the lantern display at Jogyesa. 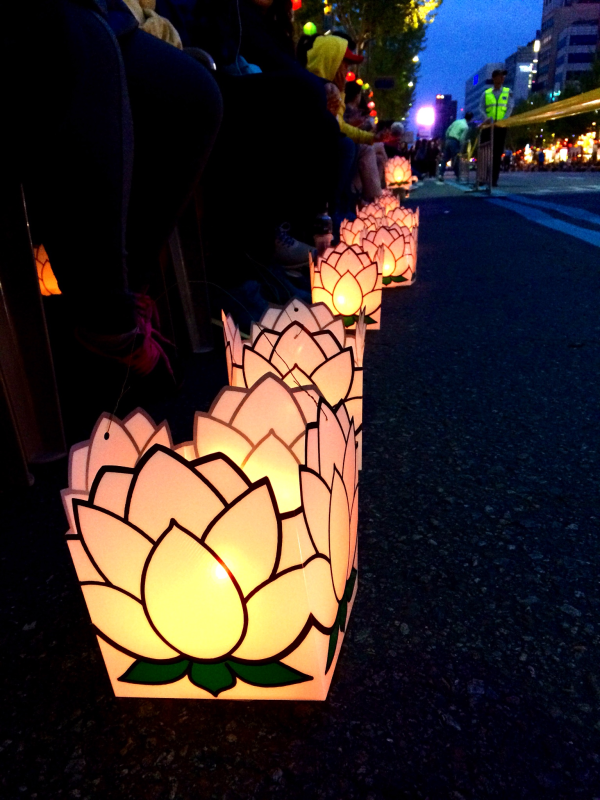 The parade's volunteer staff passed these out to everyone in the crowd before the parade began! Great souvenirs that also added to the atmosphere of the parade.

This year, the overall vibe of the parade was very different from the boisterous celebration of music and dancing that I've seen in the past. Due to the tragedy of the Sewol, the parade was changed into one of mourning to pay respects to the deceased and missing. The lanterns everyone carried were adorned with yellow ribbons, which has become the symbol of remembrance for the terrible ferry accident. 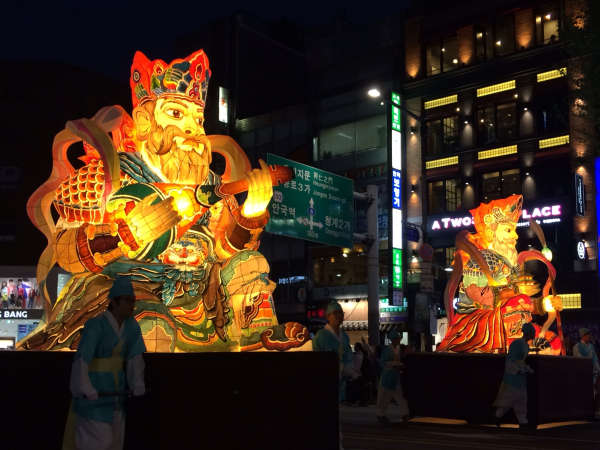 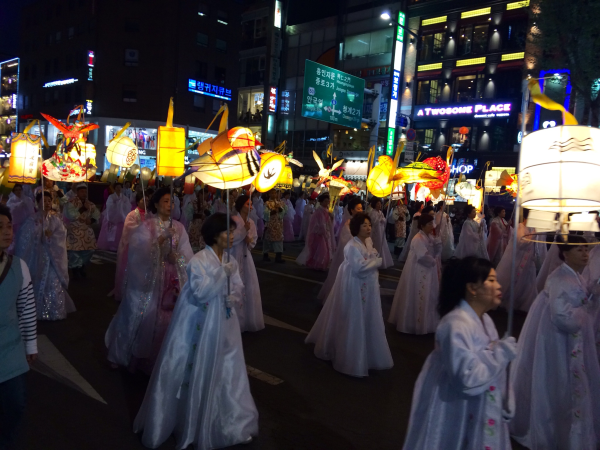 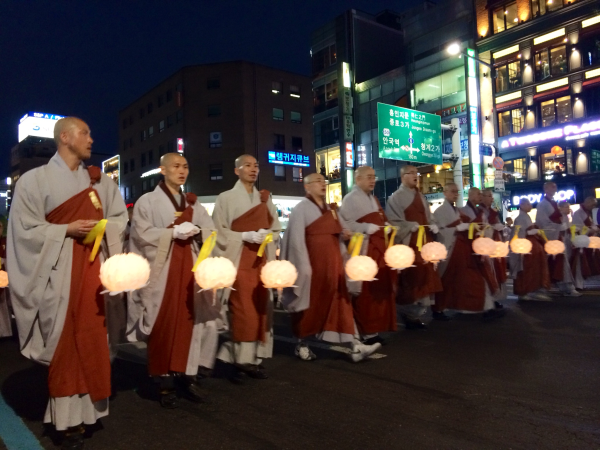 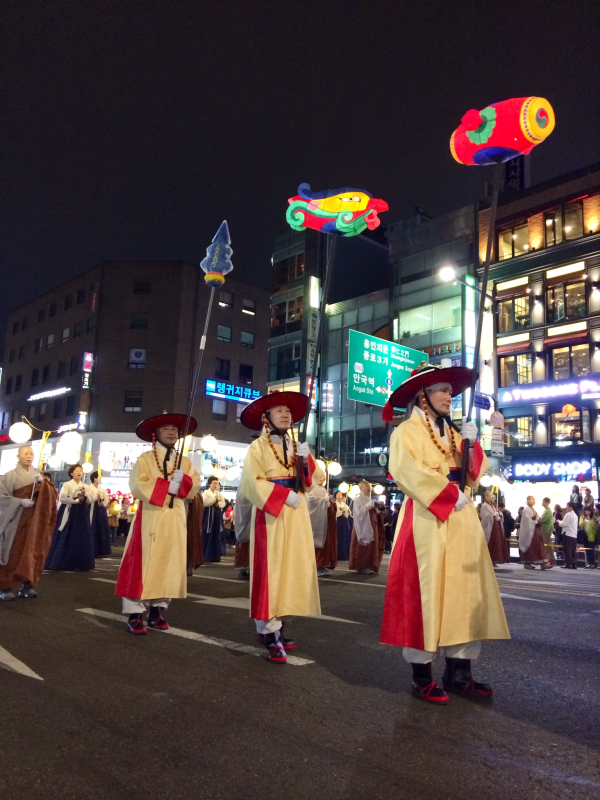 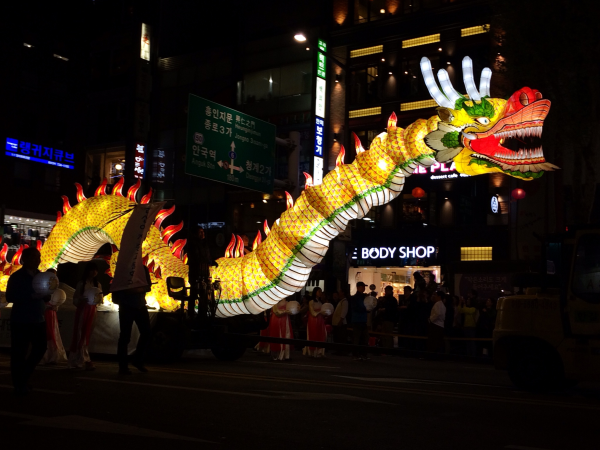 As you can see from the last of the photos above, there was still a little smiling and waving. Many people looked very sad while they walked, but would return a smile when met with one.

This year's parade, while much more serious, also still including parade participants approaching the crowds along the street to hand out the lanterns they carried. As we were sitting near the end of the parade route, we had quite a few lanterns passed to us from the people in the parade. I've ended up with an absurd amount of lanterns each time I've attended this parade, and I have to say, they make excellent (free!) apartment decorations! Here's the lantern haul my group pulled in this year: 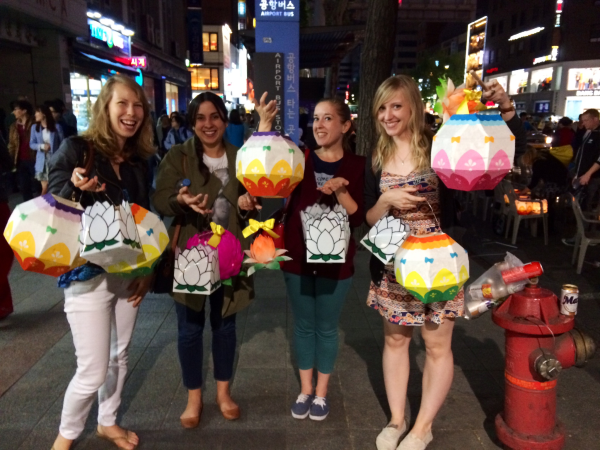 I believe that's a total of thirteen lanterns, thank you very much.

After the end of the parade, a big dance celebration usually happens in the streets, but following in the same vein as the parade, it was instead a tearful service. Monks chanted and sang, readings were given, and everyone bowed their heads in somber reverence for the ferry's victims. Crowds sat closely together in front of the stage and on the surrounding sidewalks, quietly grieving the loss of life together.

The Lotus Lantern festival for Buddha's Birthday continues to be one of my favorite festivals that I've attended in Korea. The display of lanterns at the temples and in the parade are always just beautiful and this year, although it had a different tone, was no exception. Definitely a must-see for anyone visiting or thinking of teaching English in Korea!