I am weak. I can't do it. I just can't. I'll grant you, I've never tried. But I just know, you know? I could never go a week without a good piece of meat. Or even a bad piece would be fine. I am, however, incredibly proud and in awe of those who can live the vegetarian life. To all you strong souls, thank you for doing what you feel is right. Maybe I can help in some small way by shedding some light on what it is like being vegetarian as a teacher in South Korea. How? By asking a few of my vegetarian friends 5 questions about their experience as a meatless-one in South Korea. Here we go. Enjoy the advice! 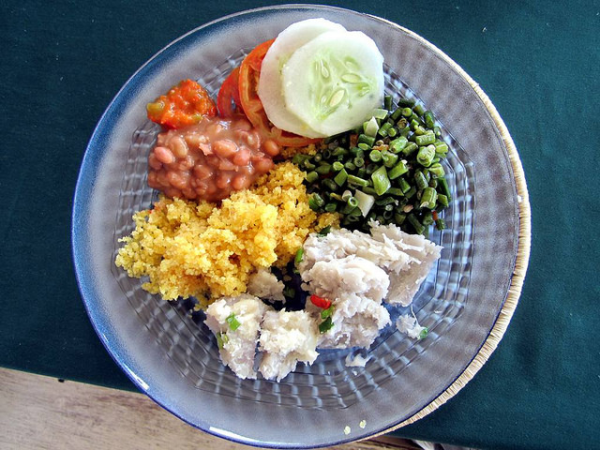 1) What's the hardest part about being vegetarian in SK?

Nombulelo: The biggest challenge was that Koreans don't even seem to understand what vegetarianism is. They always think you're confused when you request no meat. They always think that maybe you want a tiny amount of meat, and sometimes you find out when it's too late that your food actually has meat in it. Things like the black soup, where you can't see the pork were very tricky. I got pretty sick from that soup and the pork cutlets. Also, Korean restaurants have a specialty and they stick to it 100%. Pork restaurants put pork in everything. It's not like home where you can find an odd veg meal, even if you're eating at a steak house. Sometimes your friends feel like chicken but they start reconsidering because of you. I always felt like a burden when that happened

Trevor: The hardest part is not going out for meals with friends. If you go, you don't eat much except part of the bill. Most traditional Korean places offer next to nothing for a lacto-ovo vegetarian. That's the kind of vegetarian I technically am because I will eat eggs and cheese. Anyway, they have limited vegetable options (kimchi has fish AND is not a meal anyway,) and the tofu is usually served plain and cold as a side. Gross.

Jil: The hardest part of being vegetarian in Korea is having to walk by every dirty, awesome bbq place knowing you can never fully enjoy the full experience of it. When I first came to South Korea I stared in the windows of many places, knowing I'd never enjoy the beauty within. I guess, in short, the hardest part of being a vegetarian in Korea is voluntarily missing out on some experiences...but it gets far easier after a few months.

Priya: The hardest part about being a vegetarian in South Korea is that there a very few foods that are entirely meat free. Usually something has a fish base to it at least, so sometimes you do have to be willing to pick things out which is not an ideal scenario. The nice thing is that for the most part the people in restaurants are perfectly nice about taking meat out of things, which is awesome because it is considered rude to make a bunch of alterations to your food

2) What's the most important thing you've learned about being veg in SK?

Nombulelo: I've learned to be more careful, to double check and triple check, especially if I'm eating a new meal I'm not familiar with.

Trevor: I learned that going out on an empty stomach and ordering steamed rice and soju is a way to get very drunk, very quickly. I also learned to cook more dishes. I was already somewhat of a chef before I left for SK, but cooking 2-3 meals in an average day will make you expand your repertoire.

Jil: Affordable produce is everywhere! It's an awesome place to explore new vegetables. Now, daikon rocks my freakin' world. Also, it's tough. Deal with it. If you're committed to this lifestyle, you'll understand it's a sacrifice you're making voluntarily.

Priya: I cook a lot during the week, and I try and balance my protein sources. Though the majority of it is eggs and tofu. You can get lentils at some foreign markets, and it makes a nice change sometimes. Though I cook a lot, I still go out to eat with groups, and I am usually able to find stuff.

3) What tips or tricks did you learn in SK?

Nombulelo: It's better to lie and say you are allergic to meat, than to try and explain the whole vegetarian thing. They don't always get it. They are way more careful if you say it's an allergy. Don't get too upset when errors are made, it happens and it happens a lot. You'll just be miserable if you throw a fit every time. Be calm, explain you can't finish or eat the food because it has meat. They feel very bad when they mess up and they start giving you service and so on. Plus you learn that next time, I can't order this.

Trevor: I learned to be very skeptical of anything I ordered. I remember many instances of thinking I had made myself clear, and being served something I couldn't eat. One time in Seoul, I ordered a soup. I told the waitress (in English and Korean) that I "only eat vegetables" and she indicated that she understood. The soup came, and I ate it until I noticed all the shrimp at the bottom. Very frustrating, to say the least.

That said, using the Korean language is the best way to ensure you get no meat if that's what you want. Most servers don't have enough English to understand what "no meat" means. So that could be a trick. Write down a few handy phrases like "che shik jue ee-ja" (I eat only vegetables) or "ya-che" (vegetable) and have them handy. Work on pronunciation with a bi-lingual Korean friend or co-worker.

Jil: One can enjoy a beautiful dinner with friends while picking at rice and sipping soju. In truth, at first it can be difficult to think about dinner at a bbq place as a veg, but I've learned to LOVE the experience of dining with friends rather than the experience of shoving food down my gullet. Again, it's a drag missing out on the local cuisine, but one can still experience the prep and delivery of the cuisine, without ingesting it. Also, for those that don't eat fish, kimchi is out of the question. Sorry folks! Explore markets aside from the big-brand stores. You will find produce, cheap produce, and never go back. You know what they say about eggplant...once you go purple you'll never go...eff.

Priya: The banchaan side dishes are always delicious, and I am a sucker for the steamed egg. I could easily demolish three of those on my own. Add a little rice and soybean soup on the side too and I'm perfectly happy to leave the bbq to the meat eaters. A handy thing is getting people to grill the mushrooms, onions, and garlic BEFORE they grill the meat

4) How would you better prepare for SK as a vegetarian if you could go back a year?

Nombulelo: Doing your research beforehand helps. A quick google search of a meal tells you everything you need to know. Make google your friend. And when you order and ask for no meat, try to repeat yourself more than once, until you're sure they understand what you are saying.

Trevor: I'd have my parents mail me some herbs earlier because they are expensive and hard to find. Be prepared to cook a lot or make sandwiches to bring with you or something.

Jil: You know I LOVE faux meat but cannot find good faux meat anywhere except in Seoul I wish that I knew about iherb.com nine months ago because they have vegetable protein so you can make your own nuggets! Oooh and Loving Hut's restaurant food sucks, but you can buy faux meat there that knocks my socks off. Also, Cook! Never again will you have the opportunity to try out these uniquely Korean ingredients. Have fun with them!

Priya: I don't know if I could have prepared myself any differently. I had visited Korea previously in 2011, and it was a lot harder then compared to when I moved here a year later. I suppose part of it is also the fact that I can communicate in Korean now. But I am noticing that little pockets of veggie awareness are starting to spring up. For instance the restaurant in Hongdae, Plant, is an all vegan veggie restaurant and a little bit closer to me is a vegan buffet in Cheonan that I have been wanting to try.

5) What did your normal diet consist of in SK?

Trevor: I found a special brand of ramen at a health food store that was delicious and vegetarian. I went to costco for acai berries so I could make acai smoothie bowls for breakfast. I watered down a rice drink to make a kind of rice milk. I got creative with lots of curries and stir-fry dishes. Unfortunately, I also sometimes resorted to junk food because it's so easy and quick. And finally, the tiny dorm-style fridges with the leeeetle freezer up top that are in most apartments were absolutely horrible. I tried to freeze my leftover fresh veggies, but I was always running out of room.

Jil: I make a rice blend and vegetables or a vegetable soup every week. Under no circumstance would I serve this to others, but it is just fine for me. I'm not vegan so eggs are a pretty big part of my diet (though I struggle with knowing they probably aren't cage-free). Whatever veggie mix I've prepped for the week does me just fine for the rest of the day. Darn, I don't really cook so I am not a great resource: I actually think I could survive on mud. Anywho, tofu is everywhere and super versatile. And I'd say this: 1) Don't be a punk or a proselytizer; seriously, everyone gets that you're a vegetarian and will be super cool about it. Check out aliensdayout.com. Awesome resource.

Priya: At the end of the day the most important thing I have learned was what I already knew. Being vegetarian in SK isn't easy. I have a less varied diet then I ever did at home, and I go through stages where I do get tired of not being able to eat almost everything on a menu, especially because I am an adventurous eater. But I really believe in my veggie lifestyle, so on most days I handle it just fine. Also in restaurants, I am usually the one to get my food first! Win!

And that concludes the interview. It seems to be the consensus that being vegetarian in South Korea isn't the easiest thing to do. I will add that two of the four vegetarians here extended their contracts at least once. But you'll have to decide for yourself. Good luck!