Day Trip to the DMZ

Sometimes it is good to escape the Daejeon bubble and head up to Seoul. But last weekend, I decided to go even farther north. In my case, I literally went as far north as I can possibly go. Yes, that’s right, I am talking about the Korean DMZ. For all of you who do not know, that stands for the De-Militarized Zone, which essentially is the border between North and South Korea, established after the Korean War cease-fire in 1953.

So after a 5 A.M wake-up on Saturday, we made that familiar journey up to Seoul, meeting up with the Tour DMZ group at the Lotte Hotel, right near the Euljiro subway stop. I can’t speak for all tour groups, but this one required you to reserve your place 3 days in advance. Surprisingly, there actually is a dress code, so if you were planning on wearing anything with a military style or even a tank-top, then you should probably reconsider. Essentially, my advice is just do not dress like a total slob and you will be perfectly fine. 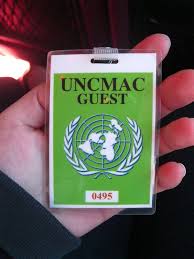 Our tour guide was an enthusiastic middle-aged Korean woman with adorably broken English, who provided a cheery narrative in a tense atmosphere that one would not describe as particularly festive. Our bus snaked its way along the Imjinjang River up to the JSA (Joint Security Area, which is also known as Panmunjom. Yes, I know that Panmunjom is actually the name of a village and that the JSA and Panmunjom are not exactly the same thing, but for the sake of this blog, I will just refer to them interchangeably.

At the JSA, after signing a rather ominous and intimidating waiver clearing South Korea of all wrongdoing if I were to get killed in a flare-up of border violence, we headed over to the military demarcation line, which is a physical boundary separating the two countries. There are blue buildings all along this line, with stern looking South Korean soldiers standing guard, eyes hidden by large sunglasses as they stare across the border at the North Korean soldier on the other side. They all wear sunglasses as to avoid any provocation whatsoever, even from something we would consider harmless such as an overly aggressive stare or a roll of the eyes. We were explicitly told to avoid any gestures at all, and were told exactly when we were allowed to take pictures. Also, the identification badge you have must be worn on the upper left part of your body, because apparently wearing it anywhere else on your body is a dead giveaway that you are a North Korean spy? 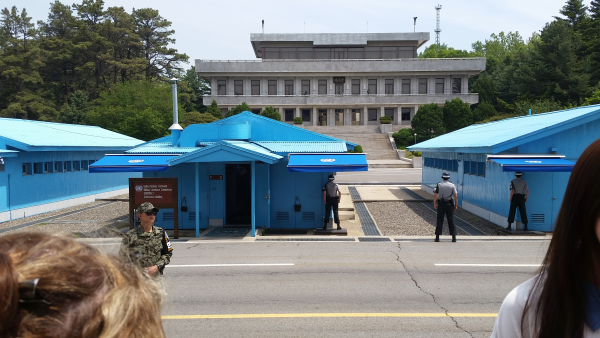 Do all these restrictions sound perhaps a bit like overkill? Perhaps, but you need to remember this border is the most heavily militarized and one of the most tense places on the planet. If you know anything about North Korea’s rather eccentric and notoriously unpredictable and volatile political leadership, then you realize that South Korea will not take any chances at all when it comes to preserving the uneasy peace.

Technically, I actually even stepped foot in North Korea. In one of the conference rooms, which sits atop the demarcation line, if you walk to the far side of the building, you are technically in North Korean territory. Here I took the opportunity to snag a quick picture with the motionless South Korea soldier standing guard (think the British guards at Buckingham Palace, sans flamboyant clothing and poofy hat). Since for obvious reasons the military wants to limit civilian access time to the JSA, we only had a few minutes at the actual demarcation line, but it was still more than enough time to soak up the unique atmosphere, and even see a real-life North Korean! 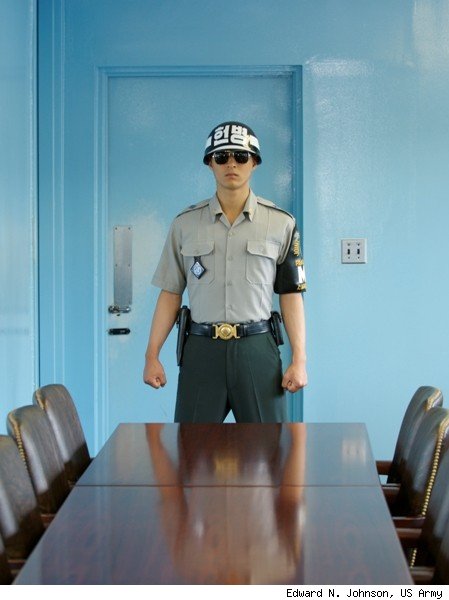 The gift shop at the JSA is filled with many of the familiar trappings of any tourist store, with t-shirts, hats, mugs, magnets, and other items of that nature. But it also sold North Korean money, which I thought was a rather interesting souvenir to show off to friends. Even the T-shirts were surprisingly affordable, so I even splurged for one of those as well.

So, although spending time at a border between two countries may not strike many of you as a particularly thrilling venture, I really did enjoy the trip. The entire trip, including lunch and travel time to and from the DMZ, took less than 6 hours so it really is something worth your while. Just leave the fireworks at home, since no one wants to be that guy that started World War 3.