I am currently teaching in Bundang just south of Seoul and the place is full of many areas to run. I frequently run on the Tan Chan (the path that follows the river). It is flat and soft running surface that goes for miles and miles. (Pretty much every city has paths like this. They are very common and frequently used by all runners.) When I get bored of running on that, I have found trails in the mountains as well.

However, the best experience I have had here as a runner was joining the Seoul Flyers Running Club. Fortunately, I just happened to see the group on Facebook and looked through the group and saw that they meet together 4 times a week to run. You can find their schedule on their Facebook page. 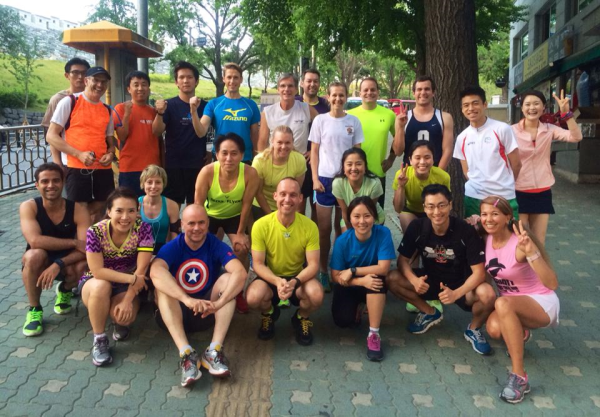 The group is full of friendly people from all over the world including: America, Australia, Canada, England, France, Ireland, Korea, Poland, Germany, Russia, New Zealand, and South Africa. Also, there is a wide range of experience and abilities. Some people are former college athletes, while others just started training for just a few months. It is a really fun and social group. For example, every Friday there is a Karaoke challenge in order to fully become a member. (I still have yet to complete the task, but am willing to do it.)

My favorite day of the week is Wednesdays because that is the day we run up Namsan Mountain. Namsan Mountain is famous for the N. Seoul Tower. It is a pretty steep climb, but definitely a great workout. The top is a beautiful view that is full of bus tours and people from all over the world looking to check out the tower. When we are finished running the mountain, we rally at the base of “Overachiever’s Hill,” where we do hill intervals and pushups and sit ups at the top. It is really funny because I never thought in my life I would be doing a workout with people from Australia, Ireland, Canada, and Korea on Namsan Mountain. It’s moments like these where I am really happy that I am teaching in Korea. What an experience! 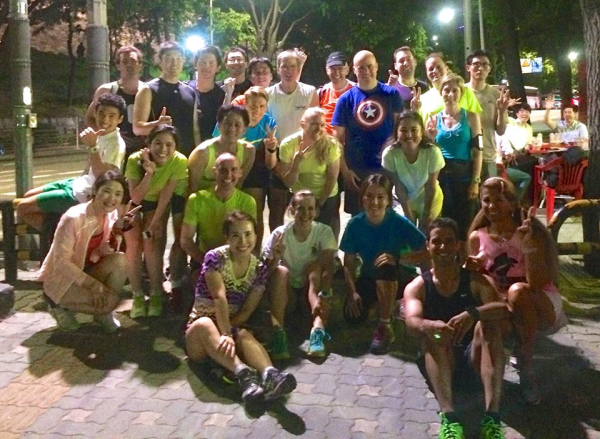 After the run, we head to the local Uncle Cho’s Restaurant for some Bibimbap and other local Korean dishes. It’s usually a time, where we are “peaking” or when the runners high kicks in and we talk about various things like the World Cup, traveling, or other running experiences. All the people in the group are so friendly, so it’s been an awesome experience as a new member with the Seoul Flyers. 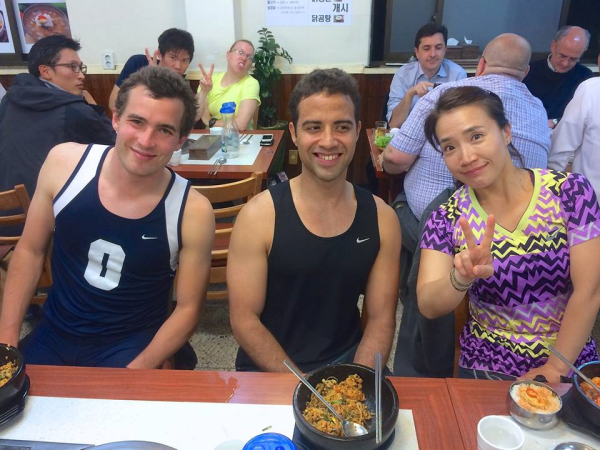 If you are interested in teaching in Korea and are a runner, joining the Seoul Flyers is an absolute must. I have made very many friends and have gotten in better shape since joining the group. It is only 25,000 Won, and you get access to at least one free race a month on the military base. There is also lots of information about other racing opportunities. 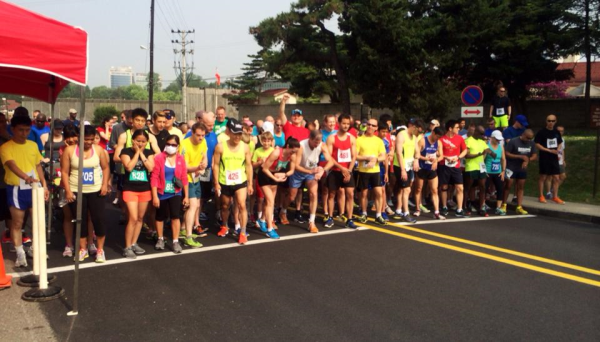 (Racing at the Army Base)

After graduating from Georgetown, Brian sought out the life of international travel and living abroad. Beginning with his volunteer work in South Africa, Brian decided to continue on to South Korea to experience East Asian culture and society. In February 2014, Brian accepted a position through Aclipse to teach for Chungdahm Learning at the Bundang branch just south of Seoul. When Brian is not in the classroom, he is busy with his running club, exploring the surrounding mountains, and learning the Korean language.