Living in Korea for almost three years now has been one of the best experiences of my life. I am truly thankful for the opportunity that I got to work here. There are so many great places and festivals to visit; it seems that there is a gathering somewhere in Korea every weekend. That said, Chungdahm’s Traveling Club went to the Bucheon Light Festival held at Aiins World.

One thing that I really appreciate about Chungdahm is that the people work really hard to make sure that we teachers are not just teaching. They have put up a variety of different social clubs and continuing education classes like the Traveling Club, Photography Club, Volunteering Club, Korean Language Class, and GMAT Prep Course. One of the biggest benefits of working for Chungdahm is that they encourage foreigners to get involved.

Since vacation days are somewhat limited, it is good to know that they are willing to organize and take teachers out to explore different areas of Korea on the weekend. (Some events Chungdahm pays for!) Although it is relatively close to Seoul, Bucheon has many different activities that one could do over the weekend. The most popular is Aiins World. 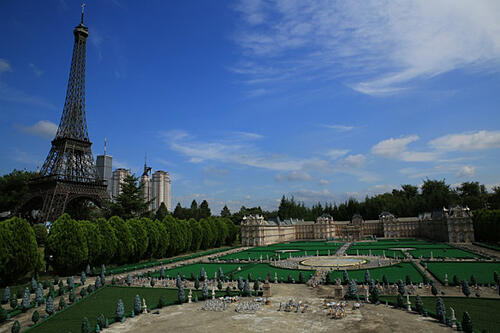 Aiins World is a miniature landscape park. It can be a little bit tricky to find because it is in the middle of apartment complexes, but it is a must see if you are in Bucheon. From Bucheon City Hall, just take a taxi to save yourself from getting lost. It has many different world famous landmarks like the New York skyline with Broadway and the Twin Towers, the White House, Taj Mahal, Moscow’s Red Square, and the Palace of Versailles. Many couples and families come to this place to take pictures with these landmark replicas. The main reason the Travel Club decided to go there was to see all of the buildings light up. When that happened, the theme park seemed to transform. My favorite lit up monument was the Eiffel Tower. Many couples were taking pictures in front of the monument just like how they would do if it were the real thing. Some buildings had light shows projecting onto them making it a really beautiful place to spend a summer’s evening. 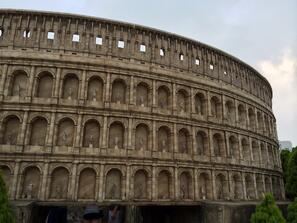 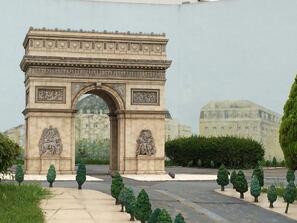 There was also a magic show that was all done in Korean. It may seem juvenile, but I still couldn’t understand any of the tricks the magician did. If you stayed long enough, the people at Aiins World would give prizes like free entrances to the park and gift certificates. One lucky Chungdahm teacher said that they had won a free pass back.

But besides getting to take some amazing pictures with some of the world’s most famous sites and scenery, Chungdahm teachers got a chance to interact with one another outside of the academy. It was really cool getting to meet new people and learn why they chose Korea to work. We all come from different backgrounds and places so it was nice to know that some people were having the same joys and hardships that I had experienced. Hopefully, we will have more teachers come out for our future activities!

Tags: teaching in Korea, things to do, what to do on the weekend, teaching at Chungdahm, Bucheon, Light Festival, Aiins World