Seoul, for all of its skyscrapers and neon lights, still holds a significant amount of history. From the palaces to the quiet little neighborhoods that are a throwback to a different era, I'm always interested in finding the parts of Seoul that have retained some of Korea's long history. Last weekend, while wandering around the Ihwa Mural Village and feeling like I'd been transported back in time, my friends and I made the happy discovery of finding part of the old Seoul City Wall as we hiked along Naksan! 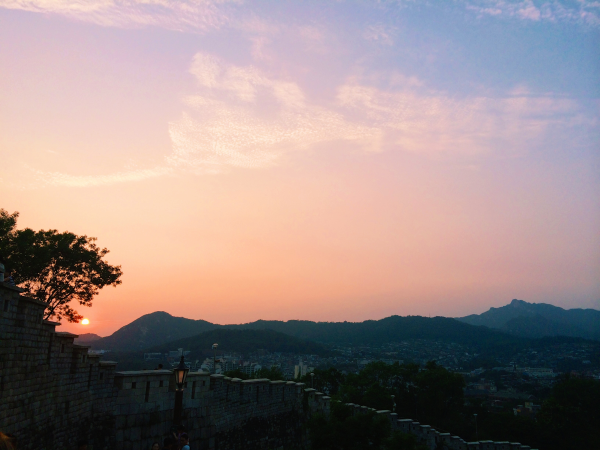 I knew that there was a fortress wall, and I knew that one of the best spots to admire it is along the remnants that stretch between Bugaksan and Inwangsan. I did not know that we would be stumbling into it as we were wandering through Naksan Park. We were so taken with the wall and the views the mountain offered that we actually ended up abandoning the hunt for murals in Ihwa-dong. We caught a beautiful sunset from the top of Naksan and thoroughly enjoyed wandering alongside the city wall, observing how it has clearly been patched and repaired over time.

Naturally, this led to me immediately looking into hiking along the other parts of the wall, so read on for the information you need to know when checking it out! 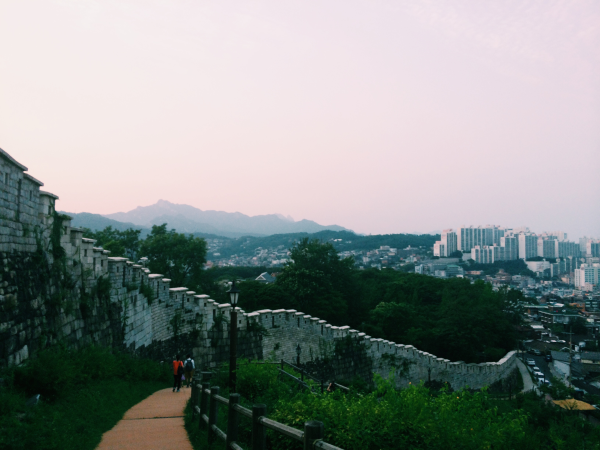 The wall has a very long history behind it, having been originally built in 1396, just a few years after the founding of the Joseon Dynasty by King Taejo. With the Joseon Dynasty came a change in capital cities, moving the capital to Seoul. The fortress wall was built to connect the four guardian mountains that surrounded the new capital city: Bugaksan in the north, Naksan in the east, Inwangsan in the west, and Namsan in the south. The wall was constructed to protect the new city and its new palaces, and it originally stretched 18.6 kilometers.

History hasn't been kind to the wall, and it has been damaged badly over the years. The government has worked to restore it several times, particularly following invasions or war. The largest and most recent renovations began in the 1970s. A 12 kilometer section was even designated as an official UNESCO World Heritage site, thus helping with the preservation efforts. Restoration is still being done, and as of this year, about 70% has been preserved and restored. 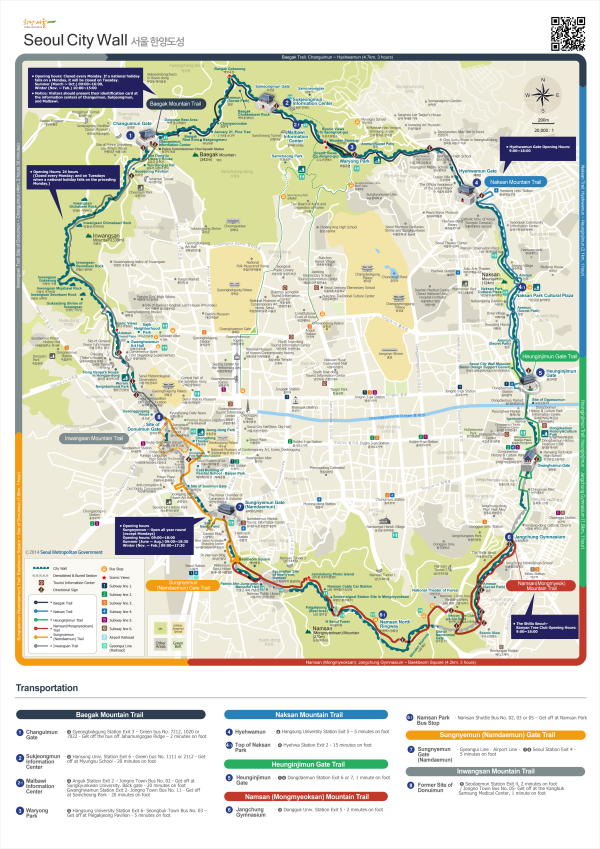 I was really taken with the views of modern Seoul from over the side of the old city wall, just as in Suwon with its Hwaseong Fortress.  Since I'm planning to trek along other parts of the wall soon, here's all the information you need to know so check it out yourself!

Links with directions and information:

Have you hiked along portions of the wall? Do you have a favorite area that's worth recommending? Leave a comment below!

Tags: seoul, things to do, hiking, Activities to do in Korea, seoul city wall, Weekend activities in Korea