First we hired a car from Seoul. This was my first time hiring a car in Korea. I was amazed at how simple and easy the process was. We called the agency, booked the car and then collected it. No credit card was needed. Then we were on our way to Odesan mountain! Korean freeways have wonderful gas-stops where you can not only eat good food but also experience something cultural. I ate bibimbap and took a few photos in the lovers garden, before we were on our way again. A must: grab some frozen persimmon juice, it is delicious!

Odesan Mountain was our first stop on the trip. It is about two and half hours outside Seoul  in the heart of the Gangwondo countryside. I just loved this mountain and the hiking trails! It reminded me a lot of Switzerland with the green trees and the white gushing rivers. There were beautiful temples and some of the tallest forests I have seen so far in Korea. Also, since it is a national park, there is a chance to see plenty of Korean wildlife that you don’t get to see in the cities. Gangwondo is a much cooler region of Korea, which makes the forests seem moist and fresh. Odesan has a beautiful temple where you can partake in overnight temple stays. You should also try the ttok (rice cakes) that are made with potatoes not rice. 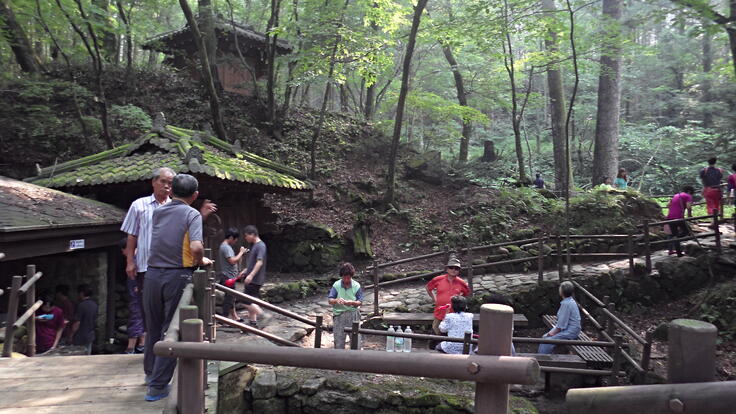 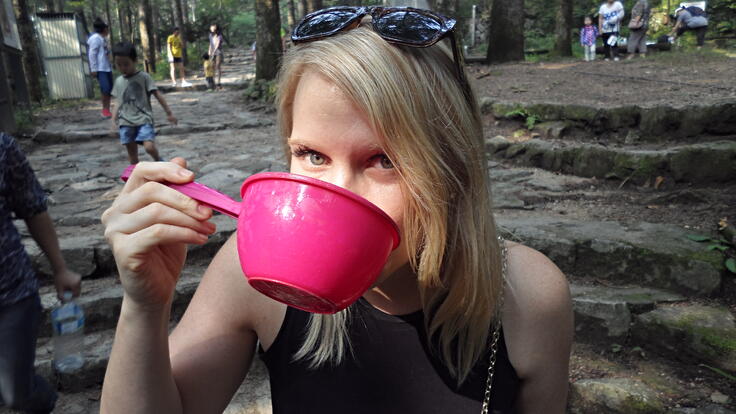 Our second stop on the trip was the  Apensia Resort. Apensia is famous for its winter retreats as it has some of the best ski slopes in Korea. The slopes are extensive and they are currently expanding  the area for the 2018 Winter Olympics. The Resort is luxurious and be prepared to pay $300 plus per night for a single room. There is also a casino at the resort, but only foreigners are allowed into the casino. It is illegal for Koreans to gamble. You also need your passport if you would like to enter. 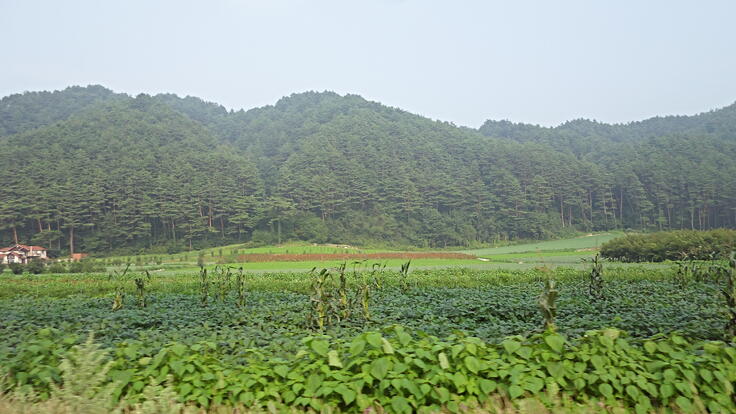 That night we ate at a traditional countryside restaurant in a small Gangwondo town. The squid and bulgogi stir-fry was delicious. We also tried the traditional Korean dried fish Haehwa, which was salty and a little sweet. Generally foreigners are less likely to venture into the smaller restaurants, but inside these restaurants are some of the best traditional Korean cooks! 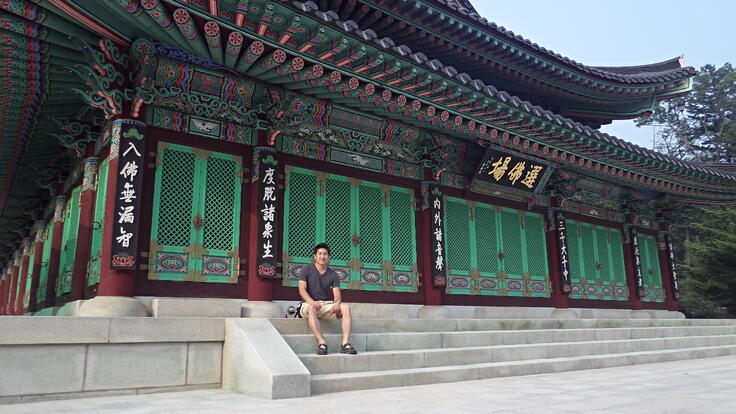 The following day our third stop was Naksan Beach. I have been dying to go to Naksan Beach all summer and finally got to squish my toes in its white sand. Most of Korean beaches are brown sand beaches, so it was a delight to see something different and astounding.  The beach overlooks the blue Pacific waters and the East coast has more waves and cooler swimming temperatures. You can rent beach umbrellas and chairs. 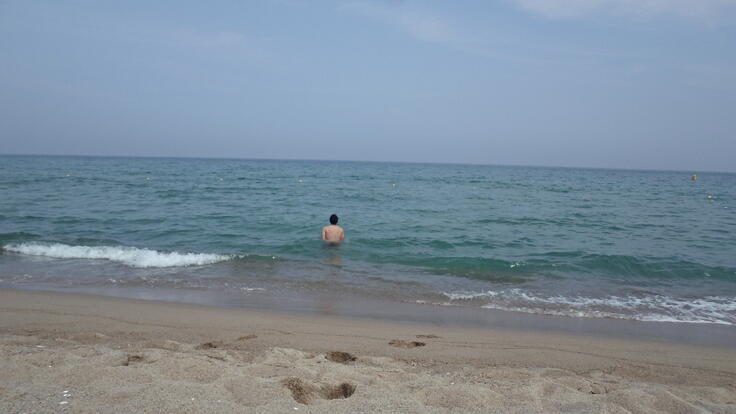 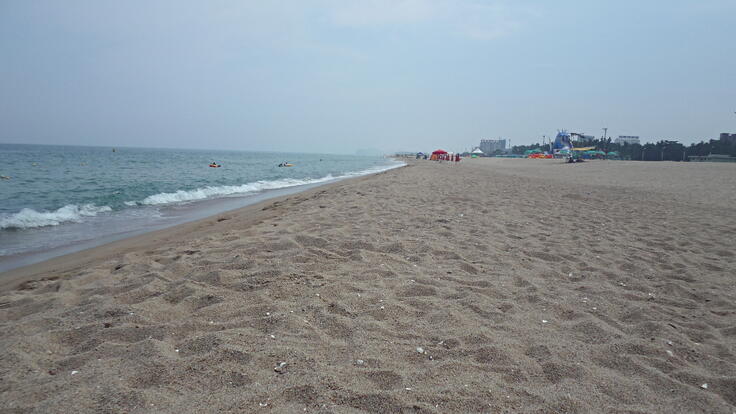 For lunch we went back into Yangyang town and ate Nakjijongol. This is a traditional dish in the region and it’s definitely worth a try! It was absolutely delicious! I have never been a fan of squid, but was surprised at how much I actually like spicy squid stew with meat as a combination. 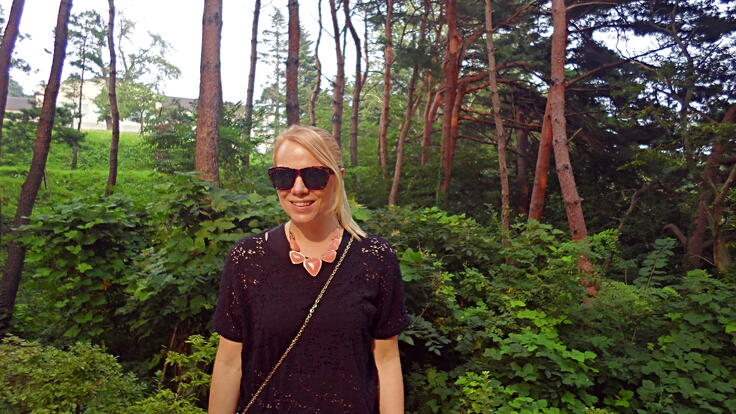 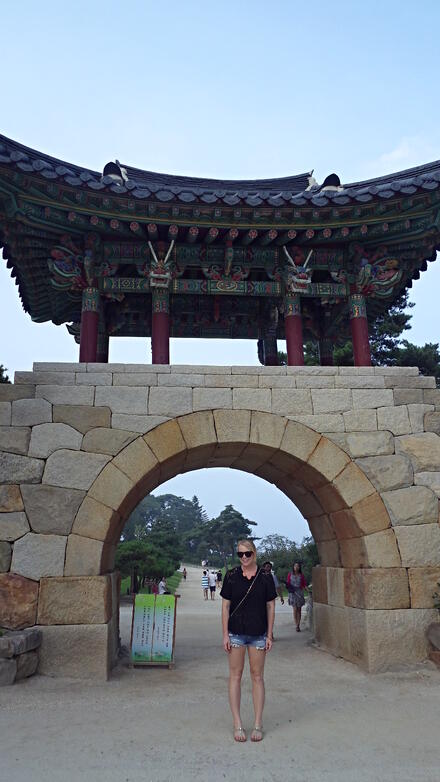 For our final stop we drove to Naksan Temple. Naksan Temple was my favorite part of our trip. This temple must have been the best temple I have visited in Korea! It was absolutely breathtaking. Naksan Temple is on a cliff and overlooks the Pacific Ocean. It is a large area where you can hike and walk from temple to statue to lighthouse. There was even large lily pads and gong bells you could hit. The large Buddha statue at the top of the cliff stands steady overlooking all the tourists that pass by and the incense burns delightful smells as you take in the sea breeze.

Gangwondo is well worth a visit and a great weekend retreat just outside of Seoul! 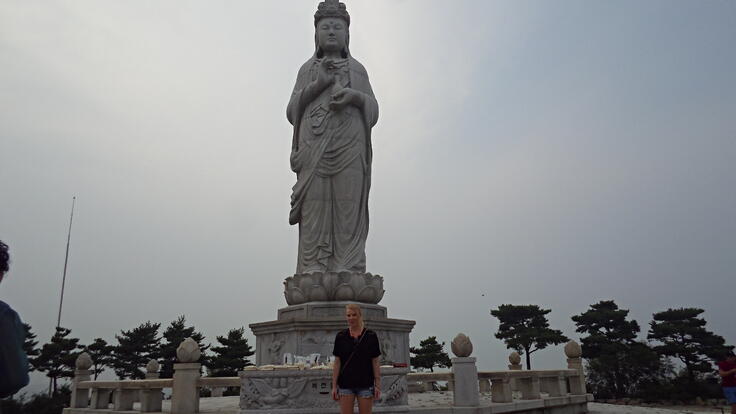