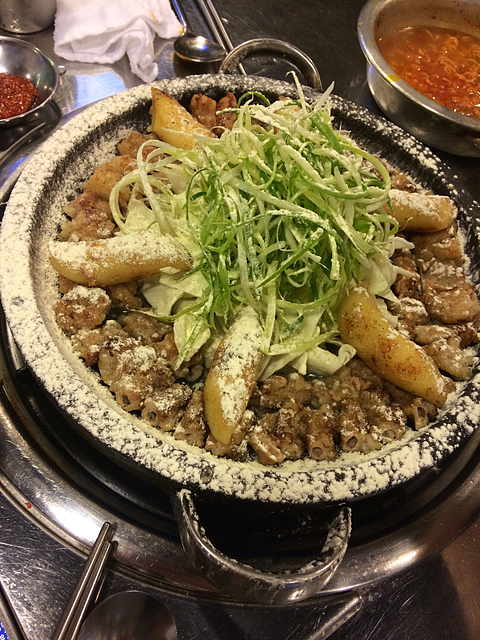 A classic here in Korea, and definitely one of the items that'll really make you grimace -- either from its appearance or from its smell. You'll typically see these being sold by street vendors, where a giant vat of these silkworm pupae will be simmering, ready to be scooped into a small paper cup and eaten with toothpicks.

For me, the smell is just too much... And, the taste isn't anything great either. What does it taste like? Well, it's only slightly crunchy since it's been soaking, a little chewy, and the taste is pungent. Eating it while it's still warm is recommended over letting it go cold. My students all tell me that it's important to eat beondegi with soju -- that's the "best" way to eat it and it's what their fathers do. So, should you be game for trying some silkworm larvae, have some soju handy!

Do not let the name confuse you, for this is not at all a delicious ice cream dessert. Instead, Korean sundae is a savory dish that's essentially a Korean version of blood sausage. Europeans may not be grossed out by blood sausage, but I know from experience that many Americans balk at the description. But try it anyway -- it's really good!

Sundae uses steamed or boiled cow's or pig's intestines for the outer casing, then it's stuffed with all kinds of things. Depending on where you go, you'll find sundae filled with things like cellophane noodles, scallions, kimchi, and of course, blood. It doesn't taste bloody at all, and in fact, when discussing sundae ingredients with students (who universally love eating it), they were quite confused to learn that there's actual blood in it. So, let that be encouraging and don't be afraid to try it!

The infamous live octopus. This had been on my foodie bucket list for ages. It just seemed so weird that I really wanted to give it a shot. Living near a fish market, some friends and I ventured out for lunch a while ago and part of our mission was to eat sannakji.

By live octopus, I don't mean the whole thing (though that is something you can eat, should you be brave enough). Instead, we just munched on pieces of the tentacles, which were still writing and suckering. It's a very weird sensation to feel like you need to quickly crush your food with your jaws so that it doesn't continue to grab the inside of your mouth with its suckers... I probably looked pretty comical as I dramatically chomped down on it as fast as possible. The flavor is really good, which surprised me. Sannakji is prepared with sesame oil and seeds, as well as bits of sliced veggies, so it had a very fresh and salty seafood taste.

This is another item that isn't always strange depending on the cultural background you come from, since the eating of intestines can be found all over. But, I still know plenty of people who turn their noses up at the thought of eating any sort of animal innards. I was pretty keen on trying it, especially after a restaurant, perfectly named Beef Intestines Story, opened in my neighborhood that specializes in gopchang. Between hearing about gopchang from students and seeing this restaurant with a hilarious name, we finally gave it a try. And it was goooood. 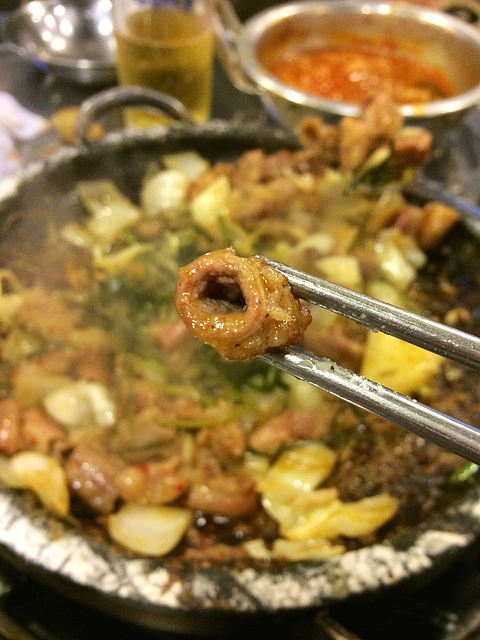 When trying intestines in Korea, there are a lot of different "areas" you can choose from, with gopchang actually being the small intestine. It's cooked well with rice cakes, veggies, and delicious seasonings. The pieces are a little chewy but also very, very flavorful, making this a tasty meal.

This last one I have to admit I haven't actually tried yet, but the spoon worm is just so, so strange and I'm quite curious to see what it's like. From what I've read online, it's served raw, with sesame oil, and it has a very salty flavor and chewy texture. 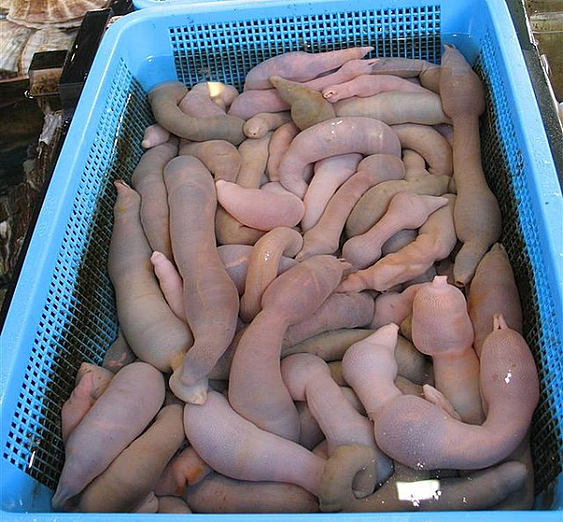 The bizarre appearance of the spoon worm is eye-catching. I see aquariums filled with these things outside of the many seafood restaurants in my neighborhood, so this may be next on the list of weird foods to try...

The above foods are definitely not the strangest to be found in Korea, but I think they're a good start for anyone looking for unusual meals. So, get some friends together and try some of these out!

Any recommendations for weird foods that I didn't list above? There are quite a few others worth mentioning, so if you know of some, leave a comment below!