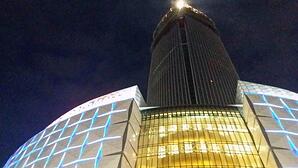 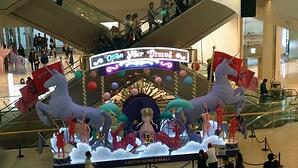 Lotte World Tower is built in front of Seokchon Lake, home of Lotte World Amusement Park and across from the Lotte World Hotel. It is easily accessible by going to Jamsil Station (Subway Pink Line #8 and Subway Green Line #2). Although it was opening weekend, it was not as packed as I expected it to be. To inaugurate the opening of the mall, the world famous artist Florentijn Hofman brought his Rubber Duck Project to spread joy here in Korea. Many couples and families (including myself) were excited to take pictures with this 54-foot sculpture floating at Seokchon Lake. Not only that, but many people picnicked in front of it while listening to a live jazz performance. The mall is divided into two sections. The first section is like a normal mall while the other is for high-end luxury retailers (named AvenueL). All of the luxury retailers (ex. Dior, Burberry, Louis Vuitton, Gucci) were all opened and ready for business. On the other side of the mall, many retailers were still putting up their finishing touches. It was exciting to see that many of the stores that I shop at (ex. Uniqlo, Nike, Adidas, H&M) will be there. It was fantastic because on both sides of the mall, each level was divided up specifically for male and female shopping. Also, there were designated areas for outdoor/recreational clothing, children’s clothing, and for home furnishings. No more traveling to crowded Myeongdong or Yeouido to do my shopping. 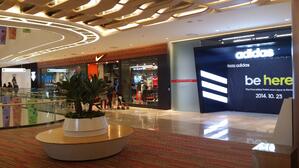 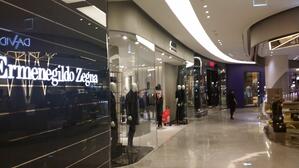 Not only that, but there are multiple activities that you can do in the mall. The Lotte group knows how to do things big! Many families had brought their children to visit the Lotte Aquarium on the basement floor. It is set to house over 650 different species of marine life. It will also have the largest seawater viewing tank in Korea at over 25 meters-wide. Not only does Lotte World Mall have an aquarium, it also houses the largest movie theater in Asia. The theater has 21 screens and can fit about 4600 people. Furthermore, The Guinness Book of World Records declared that this theater has the largest movie screen, the Super Plex G. Built in an opera house like setting, the screen is 34 meters wide and 13.8 meters long. There is also a wax museum that features popular actors and singers from the Korean Wave. Many females were waiting to take pictures with actors Lee Min-ho and Kim Soo-hyun. 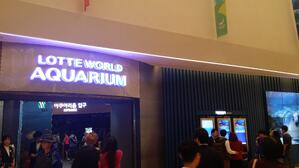 For me, I think what gets me excited the most is the food! There will be so many restaurants to choose from. The two that I am most excited for are straight from America, P.F. Chang’s and the Hard Rock Cafe. Years ago there was a Hard Rock Cafe in Itaewon, however it had closed down. We are lucky to have this icon back in Seoul. Another one that seems very intriguing is titled “the world’s best seafood buffet” called the Viking’s Wharf. All I kept seeing were lobsters, lobsters, and more lobsters. If seafood is not your thing, no worries. Floors 5 and 6 are completely dedicated to food. The 6th floor is completely dedicated to traditional Korean food. In any case, I am sure that this will be the go to spot for food lovers. Lotte World Mall, I think will become the latest hotspot here in Seoul. 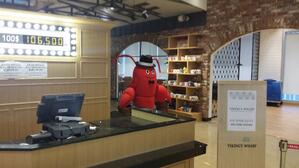 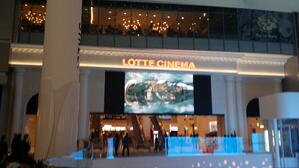