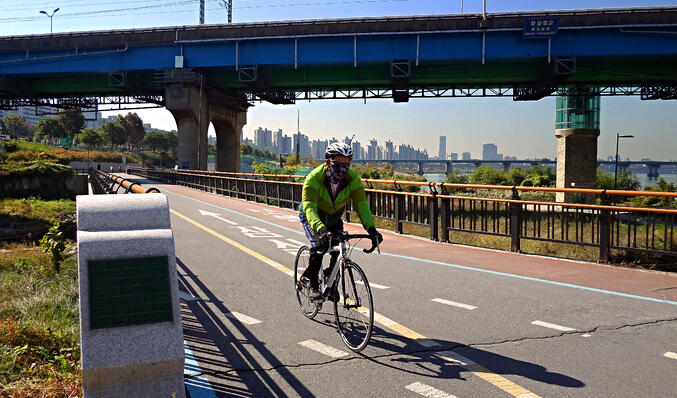 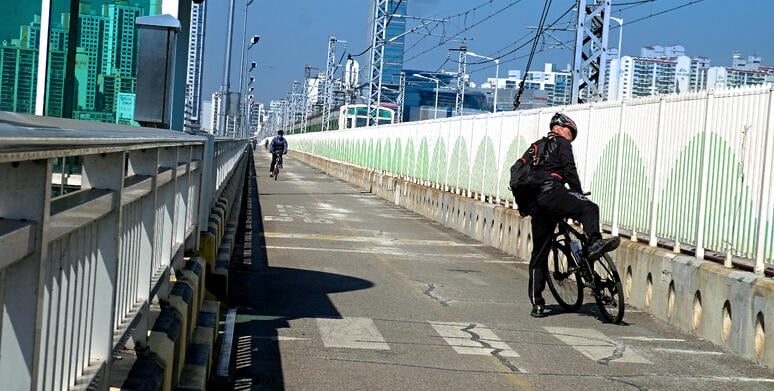 Most Seoul athletes live out their mornings and afternoons on the Han river. The Han river runs directly through Seoul, dividing the city into two, and it is the fourth longest river in Korea. The Han river has played a major historical role in Korea. The three kingdoms of Korea fought a great battle on the Han, as they strove to take over the land that was a major trade route to China. Nowadays the Han is no longer used as a port because its estuary bars navigators from getting through. Currently, the river is populated with bike ways, pedestrian walkways, public parks and restaurants. In a recent survey Seoulites voted the Han river as the second best scenic spot for recreational activities in the city. Some of Seoul's most famous scenic spots exist on the Han or near to it, such as: Yeouido, Seoul Forest, Olympic Park, 63 Building and Jamsil Hangang Sports Complex. 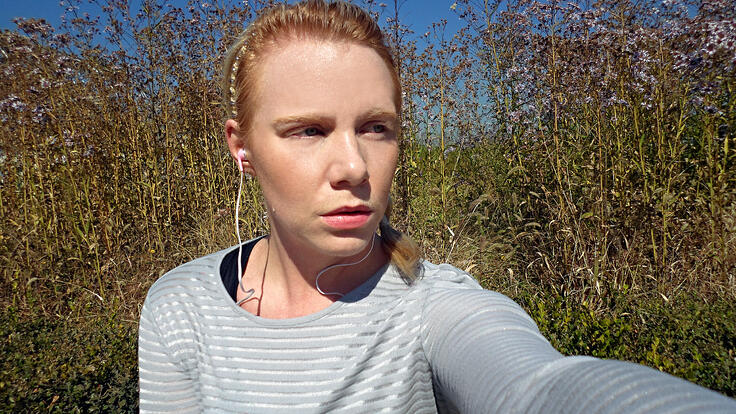 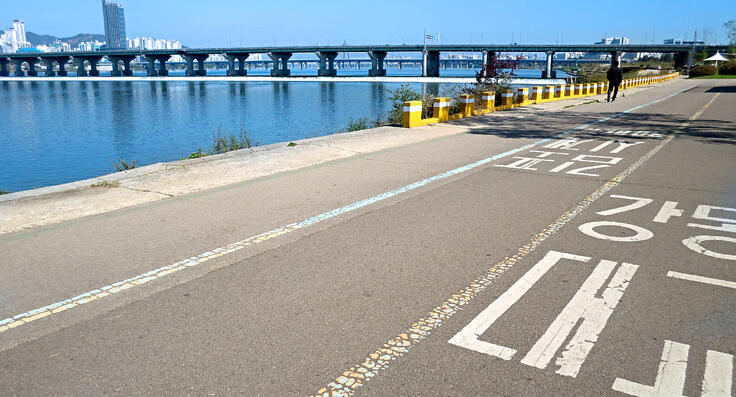 Since living in Seoul I have become a fan of running and cycling on the Han river. During Spring and Fall the weather is beautiful, with crisp and clear blue skies. It is the perfect weather conditions for heading outdoors and breathing in some fresh air. Since I live in Jamsil, it is very convenient for me to access the wonderful sports facilities that the Hanging  River Park and Olympic Sport Complex has to offer. The usual running route I take is about an hour  through Sincheon Station to Jamsilnaru Station. I love running outdoors in Seoul because, it is a great healthy way to see plenty of tourist spots and scenic settings. For example, on this particular route you can see the Hangang River Park, the Han River Bridge, Olympic Stadium, Lotte World, Lotte Tower, Lotte Castle, Sokchon Lake, Shinsaegae Department Store and Jamsil Underground Shopping Mall. There is also plenty of scenic views and in particular, you can ride an elevator to the top of a bridge and view the whole of Seoul; while subway trains speed on behind you. 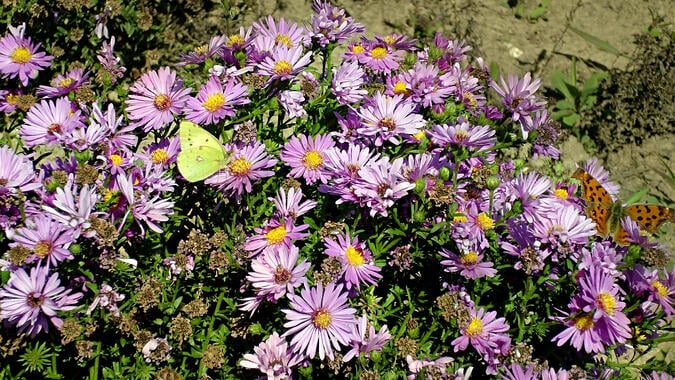 Hangang River Park offers various facilities that is suited towards athletes, such as positioned water fountains and gas-filing stations for flat bicycle tires. There are also toilet facilities all over the park and various picnic and resting stops. A popular thing to do when going for a weekend cycle is to stop for a  picnic lunch with a group and  socialize with other athletes. For those fitness fanatics who would like to do some outdoor gyming, there are ergonomically-sound equipment all over the park. The machines include air-walking machines, stepping machines, and gymnastics poles. 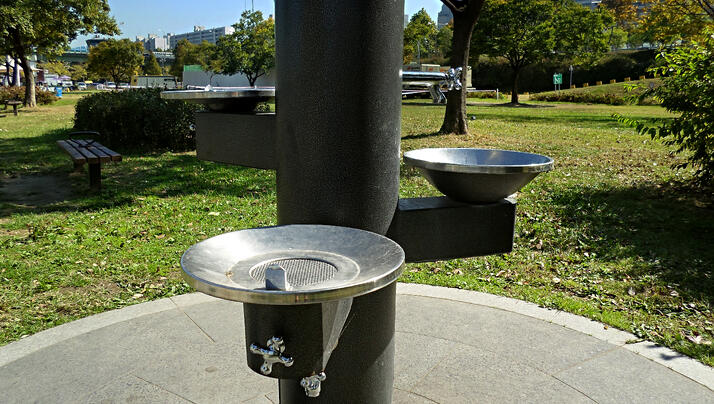 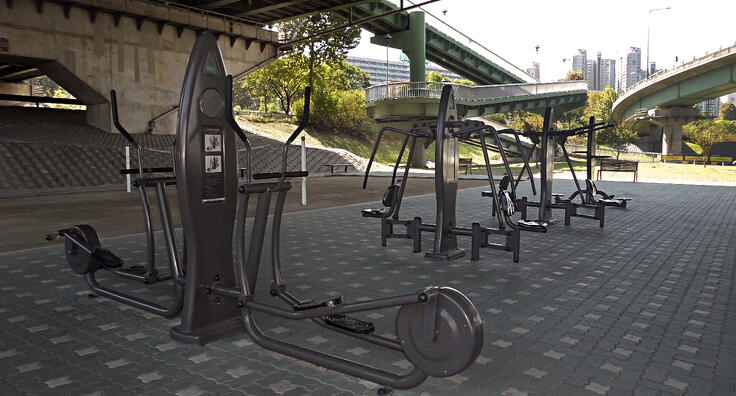 If you need food or energy drinks there are convenient stores such as CU or GS25 and plenty of restaurants, such as chicken bars or food vendors. A real treat is to see the hardcore Korean cyclists stopping off at the chicken bars, and indulging in the famous Korean past time 'chimek'. Chimek is fried chicken and draft beer. Although this defeats the point of working out, it is a wonderful thing to experience after a long cycle with friends along the sunny Han river in the Fall. 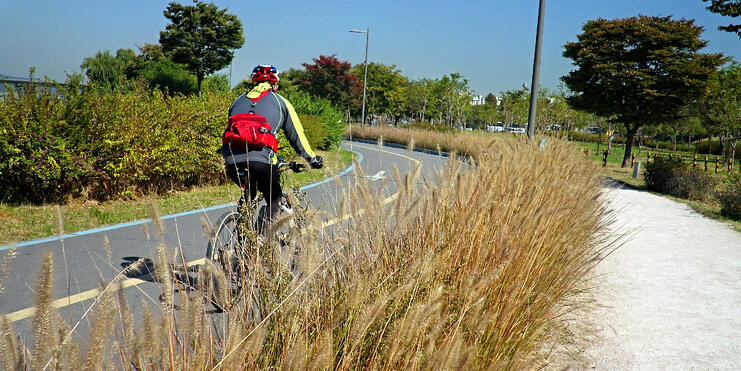 The biking road on the Han River runs for about 40km's along the river’s edge and breaks up into various directions, offering different walking routes and biking routes. The most famous parks situated on the Han river are Jamsil, Yeouido, Ttuksom, Seonyudo and Nanji. Nanji has a roller-skating rink and Jamsil has a volleyball court and swimming pool. Ttuksom is famous for water sports such as windsurfing, waterskiing and wakeboarding. 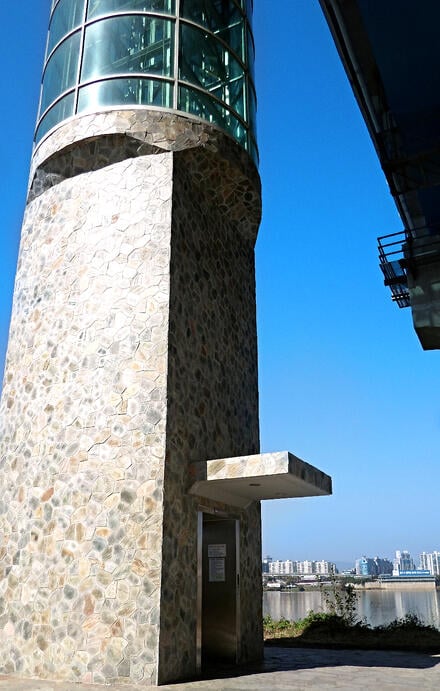 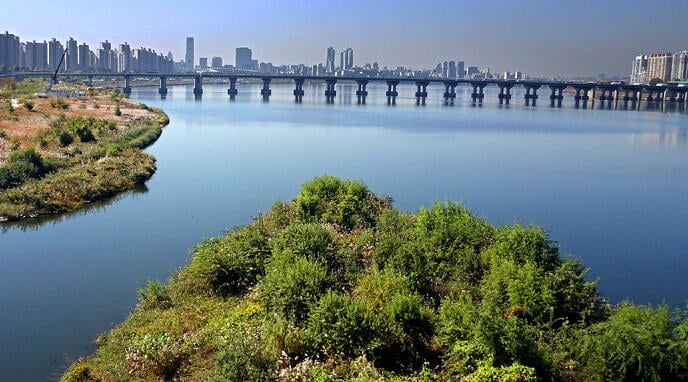