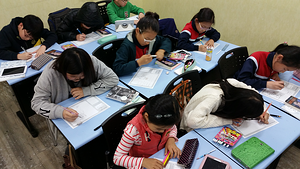 (My A2 Memory Tera class, they always work so hard)

When I first started teaching for ChungDahm back in 2013, the hardest thing for me was beginning a new term. After 13 weeks however, I finally got to know all 58 of my students.  I knew their names and hobbies, I got to see their English improve over the term along with their reading and note-taking skills and their confidence.  Then a new term started and I got new classes and new students. Today, 18 months later, it is much easier. I have taught and re-taught many students; however, one thing that never gets easy is learning their names, even if they do have English names! I joke with my students, that by week 4 or 5 I will know them all, but in reality, sometimes by week 13 I still mix some of them up. 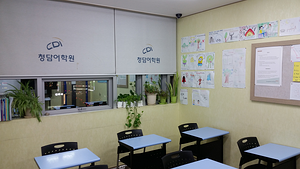 (A typical ChungDahm class room, this one is mine)

Each term, a teacher is usually assigned five classes, two classes per day (sometimes less). Each class is three hours long, and typically you will see the same class two times per week, Day one (usually reading) and Day two (Listening). After two weeks you will know their names, and they will get to know you and feel comfortable with you. You can gauge their skill levels, by then. Week three, at my branch at least, we do Student reports which the class study manager will relay to their parents. Each class usually has 8 - 15 students, however, this depends on the branch and class level.  The maximum you should have in each class is 15. 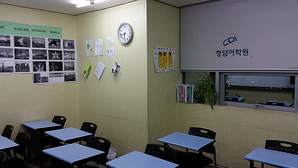 (My students make art work during project time, which I hang on the wall) 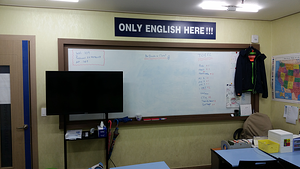 (Each class has a smart TV,  this makes learning at ChungDahm more interactive)

By week 4 you will know your class pretty well and your students' skills will be improving. Usually around this time, the term really starts to fly by and before you know it it’s week 10. At ChungDahm week 10 is level-up week. At my branch each student, from the Lower levels to the higher levels take a TOEFL test this week.  Day one is the TOEFL test, and day two they write a personal essay. It is this test which determines whether the student can move up to the next level. By week 10 your students will be prepared for the TOEFL exam and they usually do well. 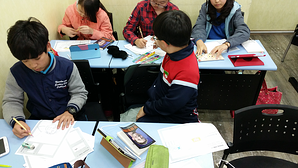 (This class always works so hard, they are working on a CTP poster) 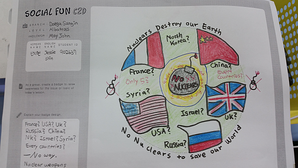 (One of the finished posters). 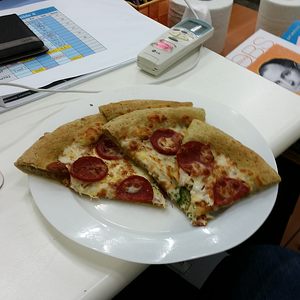 After week 10, for the last three weeks of term, sometimes students can become relaxed and tired, so to keep our students motivated we give them a pizza party on day two of week 13. This little treat insures that they continue working after their TOEFL exams for the next few weeks and it also insures that they do not get hyper for the last couple of classes.  The last few weeks really do go by fast, and before you know it, it is week 1 of the new term and you begin all over again.

I have been at ChungDahm now for several terms, and each term seems to go by faster than the previous one. There are no mid-terms at ChungDahm, so week 1 of the new term starts right after week 13 ends. After two weeks you learn the new class material and structure, and after a few terms it becomes really easy to get into a good habit of prepping and knowing the class material. One thing I love about teaching English in South Korea is how well behaved the students are. They always work hard and do their homework and they are very well mannered. It makes teaching them a pleasure.  While each ChungDahm is slightly different in terms of the classes they offer, 2.0 vs. 3.0 for example, the term structure is the same. Each term is 13 weeks, and week 10 is level-up testing (TOEFL testing).

A typical teaching Day is 4pm - 10pm. Some teachers work 4pm - 7pm, others 7pm - 10pm. It also changes each term. I have had several schedules from 24 hours per week to 30 hours per week. Some teachers may also only work 21 hours per week. which is much less than the full-time jobs people have in America or Europe. Even though you don't work as much in terms of hours, pay in South Korea is still very good. Many people come here to travel, but they are also able to save and pay off student loans.