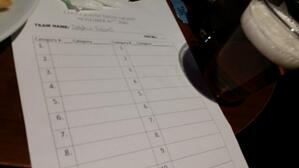 The first trivia night was so much fun. ChungDahm really knows how to put an event together. Thanks to Brian Ro, Jane Cheong, and our MC Adam. They put a lot of time and effort to make sure over 15 teams (over 60 people) had an amazing time. For our 20,000 Korean Won entry fee, we were able to get drinks and food as well as be able to participate for the cash prize. Last time, my team the Gangdong Branch (Team Dolphin Falcons) came in third place. It was heart breaking for me because we lost the lead in the last round. This time, the opposition and questions seemed much tougher than the last time. The topics included: math and science, minor characters in television shows, combining ideas using the letter C, and current events. 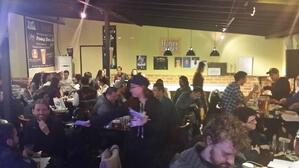 Going into the first round, there were many teams that were within points of each other. Between last and first place, there was only a difference of 6 or 7 points, so any team could take the championship. Between rounds, there was a pitcher of beer challenge. The first pitcher challenge was naming different subway stops around Seoul. There was about 25 different subway stops we needed to name ranging from Incheon to Bundang. That was pretty tough. For the second pitcher of beer challenge, there was a speed round of naming the different NFL teams. Lucky for me, the guys on my team love football, so we were able to blaze through it quickly taking the win! 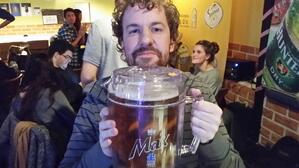 After the second round, two teams stood out from the pack. Thankfully, my team was tied for the lead. The last round questions were maybe the toughest I’ve heard in any trivia night I have been a part of. The topics included, geography, movie sequels and music with people’s name in it. Keeping the lead proved to be extremely tough. I hadn’t been nervous like that in a long time. But after the final points were calculated, 3rd place was the Daechi branch, 2nd place was the Bundang branch, and 1st place was...Gangdong Branch! My team was so relieved because placing 3rd place last time left a bitter taste in our month. Luckily, our team was able to pull it out in the end. 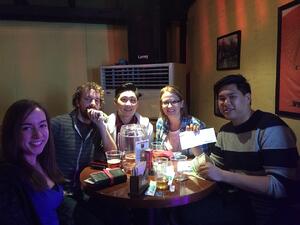 Before the cash prizes were handed out, ChungDahm held a raffle for some great prizes. Prizes included Starbucks gift cards and the popular game Cards Against Humanity. Again, ChungDahm really knows how to put an event together. The food and drinks were fantastic! We did buy additional food and other teams stayed behind to play darts, billiards, and have a few more drinks. I look forward to the next event ChungDahm puts on and I hope more branches will take advantage of these get gatherings!