A Day Trip to the Korean Countryside: Chungcheongnam-do Province

One of the greatest things about living abroad is the connections and lifelong bonds you make with people and places you became familiar with. During my first three years in Korea I had the wonderful opportunity of living in the countryside. I will never forget my first day in the countryside. I stood at a bus stop, with way too many bags, in the middle of nowhere, just waiting. The immersion into a culture unknown, is one of the greatest life changing moments a human can experience. When I look back now, living in a big city like Seoul, I am humbled that I got to experience Korea in another way. A way that changed me for the better in so many ways.

This past weekend I traveled to the town I used to live in, called Hongseong, in Chungcheongnam-do province. Hongseong is famous for beef, dried seaweed, an Earthquake during the 70’s and Sudoksa Temple. It is only 20 minutes from the famous Daecheon beach in Boryeong, where the annual Mud Festival is held. It is also close to the coast and nearby the beautiful beaches of Taean, Amnyeondo Island and Daecheon. There is also a famous mountain to climb called Yongbongsan and hot springs in the Caste Spa Resort. Hongseong is conveniently located two hours from Seoul and one hour from the fourth largest city, Daejeon. 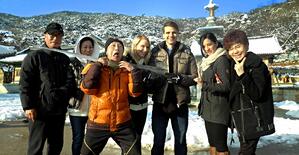 While living in Korea you not only make foreign friends, but also lifelong Korean friends. My dear co-teacher Mr Lee was the main reason I returned to Hongseong. Mr Lee and I worked together for three years and during that time I was lucky enough to gain a Korean grandfather, a person who really became my family while I was living overseas. Him and his family became my family, and often I would be driven to hospital with a broken ankle, or eating a delicious homemade Kimchi Jiggae after his wife taught me to prepare Kimchi, or even experience learning Korean while walking around his rice farm. I even attended Mr Lee’s daughter’s wedding and celebrated the festive time with him and his family in a traditional setting. 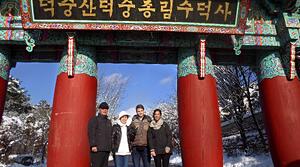 Reuniting with Mr Lee was such a wonderful and happy experience. We really wanted to hike Yongbongsan Mountain but it had snowed a lot this past week in the province, so we decided to stay indoors and enjoy a lunch at Hongseong’s famous duck restaurant. This is a highly recommended restaurant and probably my favorite in the town! It costs about $15.00 each and you can enjoy a hearty meal with a whole cut up duck covered in garlic and plenty of side dishes. I love eating out in the countryside because, the meals are always more lavish than in Seoul. By lavish I don’t mean luxurious but just that you get more than you paid for. The portion sizes are more than generous and the food tastes better than in the bigger cities! 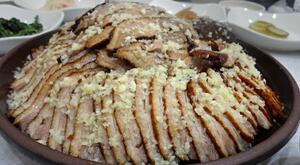 We then ventured to Chungcheongnam-do’s famous temple called Sudoksa. Sudoksa is about 1 hour  by bus from Hongseong and is easily accessible. Sudoksa has played a huge role in Korean history and is situated in the Deoksungsan Mountains. It was originally built in 1308 and has now been chosen as a national Korean treasure. The housing around Sudeoksa is unique and the special 3-storey stone pagoda is a must see. Visitors can enjoy a temple stay or browse around the curious shops and restaurants. The temple is famous among the Korean Buddhist community and it is nationally famed for its historic survival during the Korean War. It costs $2.00 for adults and is open from 6.00 a.m. to 18.00 p.m. You can catch the 290 bus from Hongseong’s bus terminal or from any other surrounding bus terminals, like Yesan, Seosan, Daecheon or Taean. 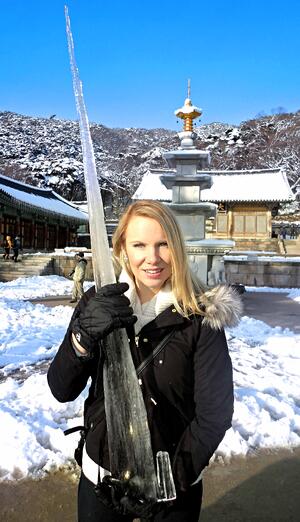